An Overview of Louisiana Soils 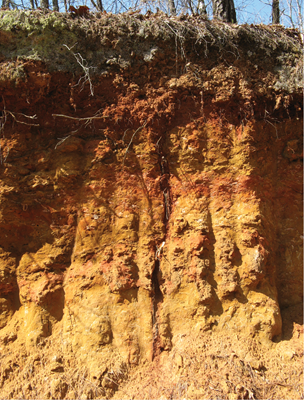 A road cut in north Louisiana provides an example of a soil profile showing multiple layers. Shallow layers generally are higher in organic matter and nutrients while deeper layers are denser and lighter in color. (Photo by David Weindorf) 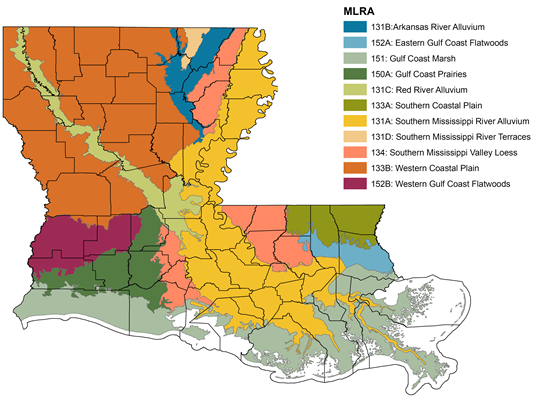 The soils of Louisiana are as diverse as its people with more than 300 different kinds. Louisiana even has a state soil, the Ruston soil series. Unique factors of soil formation, which include parent material, climate, topography, living organisms and time, have combined to produce soils across the state that are fertile, unique and reflective of local ecosystems.

When considering soils and their features, a number of chemical and physical properties are commonly evaluated. The most fundamental soil property is soil texture. Essentially, soil can be thought of as a collection of particles of different sizes: sand (largest), silt (intermediate) and clay (smallest). These three sizes of particles join in different combinations to form 12 different soil textures.

Another key soil property is soil color. Using a book of standardized colored paint chips, soil scientists can establish the precise color of the soil by noting the hue, value and color saturation or chroma. Soil color is often tied to a number of soil properties, such as organic matter, which make the soil dark in color, or iron oxides, which impart a rusty-reddish hue to the soil.

Organic matter within the soil is vital because it serves as a key nutrient reserve that improves soil fertility. Organic matter typically is highest – around 2-5 percent – in the surface level and tends to decrease with depth. Plowing the soil for agricultural production tends to reduce soil organic matter compared to natural occurrence. Some soils, found mostly in marsh areas with large organic deposits, can be up to 50 percent organic matter – for example, peat, needles and leaves.

Soil pH indicates relative acidity or alkalinity. For optimal availability of soil nutrients, slightly acidic soil with a pH of about 6.5 is desirable. Unfavorable soil pH can be modified by applying acidifying fertilizers or lime.

Soil salinity is another commonly measured chemical parameter. It is expressed in terms of electrical conductivity (EC); whereby soils with higher salinity tend to have a higher conductance.

Finally, cation exchange capacity (CEC) is a term used to describe the overall availability of nutrients within the soil. The more cations that are available in the soil, the higher the soil fertility. Soil CEC comes from two sources: organic matter and certain types of clays.

Soils of similar chemical, physical and biological features are grouped into soil series. Many of these types of data are provided to clients when they send a soil sample to the AgCenter Soil Testing and Plant Analysis Lab. They can then use the results to optimize land use and management decisions based on where the sample was collected.

Across Louisiana, soils are grouped into 11 major land resource areas (Figure 1). Many of the areas feature the terms alluvium or loess in their names. These are types of soil parent material. Alluvium indicates a soil that has been deposited by rivers. Given the large number of rivers that cross Louisiana, it is no wonder that so many of our soils are alluvial.

Alluvium can be excellent soil for farming and comes in a variety of soil textures from sandy and silty to heavy clays, depending on the source of the sediment. Areas laid down as alluvium typically have flat, deep soils, often with appreciable organic matter content that became mixed into the soil as it travelled down the river system.

Loess is a type of wind-deposited sediment that is typically silty. In Louisiana, loess is common in East and West Feliciana Parishes, along with Franklin Parish on the Macon Ridge.

Soil properties across Louisiana vary considerably as well. Generally speaking, the soils are slightly to moderately acidic, owing to the large annual rainfall. Slightly acidic soils are ideal for the optimal availability of soil nutrients. However, rainfall has a tendency to leach nutrients out of soil, so proper fertilization based on soil test results is recommended. When fertilizing, it is important to apply at the proper rate to prevent fertilizer or chemical runoff into surface waters such as bayous and streams.

Soil textures range from sandy deposits, such as Felicity loamy fine sand, to silt loams, such as Commerce silt loam, and heavy clays, such as Sharkey or Schriever clay. Here, the names Felicity, Commerce, Sharkey and Schriever denote unique soil series. The heavy clay soils, referred to as vertisols, are highly fertile. Clay particles within the soil store and exchange many soil nutrients. Such vertisols, however, are also highly influenced by moisture. They tend to swell when moist, and then crack open when dry, making building foundations, roads and pipelines difficult.

Given the lush vegetation across most of Louisiana, the soils tend to have high levels of organic materials that slowly decompose to humus. This is also an important source of nutrients for future plants to use. In fact, some soils in Louisiana are categorized as organic soils, such as Allemands mucky peat.

Given the uniqueness of soils in Louisiana, the U.S. Department of Agriculture’s Natural Resources Conservation Service has recognized a number of benchmark soils – soils that hold unique research, historical or cultural significance. In fact, Louisiana has 59 benchmark soils. A listing of these famous soils can be found in the publication “An Update of the Field Guide to Louisiana Soil Classification” on the LSU AgCenter website.

Excellent electronic resources are available to help you understand the soils beneath your feet. Don’t know what type of soil you’re standing on right now? Don’t worry, there’s an app for that! Download the free application known as SoilWeb to your smartphone. When you open this application, simply click the button that says “get my location.” Your phone will use GPS to find your location, and then report what soil is there. You can then click on each soil component listed for more information.

If you don’t have a smartphone, you can still access a tremendous amount of soils information, maps, and interpretations for soil use via Web Soil Survey website http://websoilsurvey. nrcs.usda.gov. There you can navigate to a specific location and find soils data and interpretations on top of an aerial map.

Other resources related to soils include the Soil Science Society of America website www.soils.org  and the Natural Resources Conservation Service website soils.usda.gov. The AgCenter website features downloadable publications such as “An Update of the Field Guide to Louisiana Soil Classification.”

Two books for younger readers are “Know Soil, Know Life” by David L. Lindbo, Deb A. Kozlowski and Clay Robinson and “SOIL! Get the Inside Scoop” by David Lindbo and others.

David C. Weindorf was an associate professor of soil classification/ land use in the School of Renewable Natural Resources when he wrote this article. He has since moved to Texas Tech University in Lubbock.