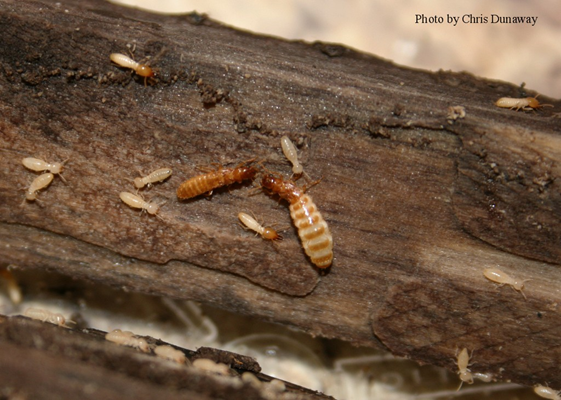 A Formosan subterranean termite king and queen along with workers and soldiers. (Photo by Chris Dunaway.) 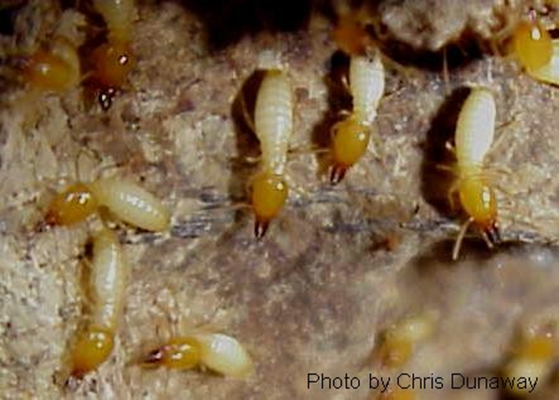 Soldiers are easily recognizable by their dark heads and large mandibles. (Photo by Chris Dunaway.) 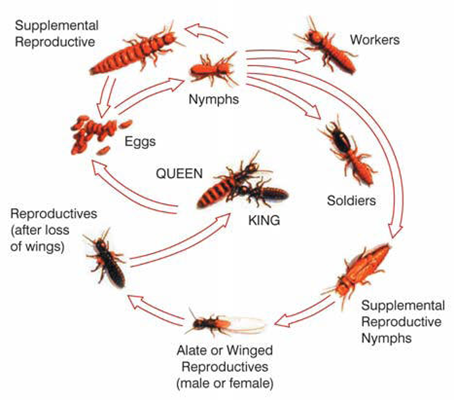 A graphic representation of the life cycle within a termite colony.

Termites are social insects, which means that they live in large groups and depend on the actions of others within the colony for their continued survival. Termite colonies are comprised of three distinct castes, which differ in appearance and in function. These castes are workers, soldiers and reproductives.

Workers – Workers are the most numerous caste in a termite colony. In subterranean termite colonies the workers are actually immature termites called nymphs. These nymphs are capable of developing into adult members of one of the other castes. As the name implies, they are responsible for much of the work within the colony, including the excavation of tunnels and construction of shelter tubes. The workers are also responsible for the consumption of all cellulosic material (ie. wood) and the feeding of the other castes.

Soldiers – The foremost duty of the soldier caste is the defense of the colony from invaders, including ants and rival termites. Soldier termites will comprise between two to 20 percent  of the population of a mature subterranean termite colony.
See also: Formosan Soldiers