Tarnished Plant Bugs in Cotton: Where Are They and Where Do They Go? 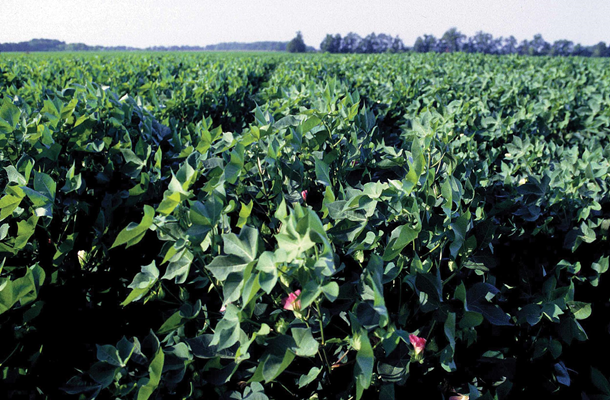 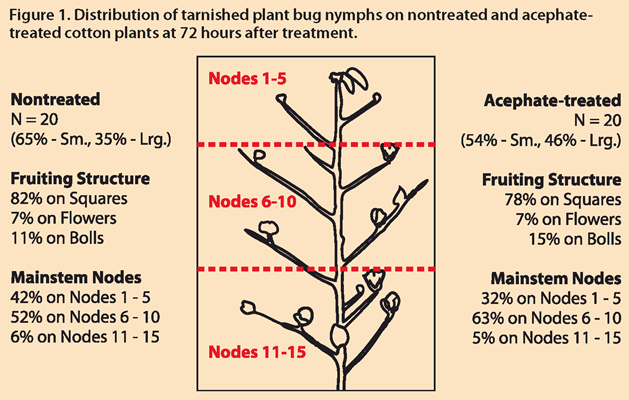 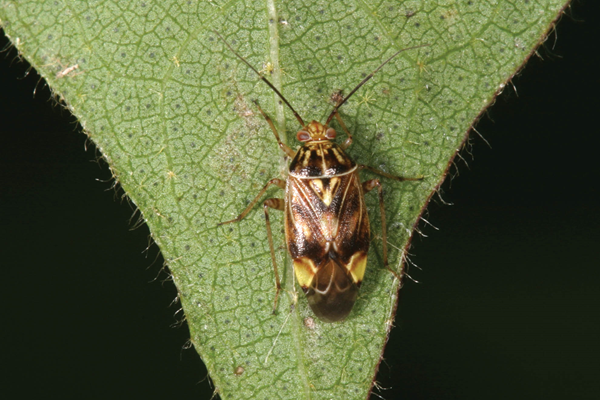 Although several IPM strategies are recommended, chemical control with insecticide sprays is the main tool used to control tarnished plant bugs in cotton. Several applications are gener- ally required each year to protect cotton from yield losses. Complete control, however, usually does not occur with any of the available products. Therefore, methods for efficiently monitoring insect populations and damage to cotton plants are vital to effectively schedule insecticide applications to assure maximum control during the entire production season.

The field dispersion and within-plant distribution of insects, either directly surviving an insecticide spray or migrating following an insecticide treatment, can be influenced by the residual properties of insecticides. This study was designed to compare the within-plant distribution of tarnished plant bug nymphs on insecticide- treated and nontreated cotton plants during the flowering stages of plant development. These results should provide insights into the limitations of the current sampling protocols and offer an opportu- nity to improve the existing recommendations for managing this insect pest.

This study was performed on transgenic Bollgard II cotton varieties at the Macon Ridge Research Station near Winnsboro, La., during 2007 and 2008. The organophosphate insecticide acephate (Orthene) and a nontreated control were examined in this trial. The insecticide was applied to cotton plants after the first week of budding and usually during weeks 3 through 5 of flowering. The insecticide was applied to the test areas when native tarnished plant bug infestations exceeded a mean of one nymph per row foot from buffer areas surrounding the test area. Each area was sampled for tarnished plant bug nymphs using a standard 3-foot-by-2.5-foot black shake sheet before treatment and 72 hours after treatment.

Within each plot, cotton plants were randomly selected and searched for the presence of 20 tarnished plant bug nymphs. Nymph size (large or small), fruiting form preference (bud, whiteflower and boll) and vertical distribution (main-stem node) on cotton plants were recorded. Main-stem distribution was described by dividing or segregating fruiting and vegetative nodes into three vertical layers. The upper layer consisted of fruiting nodes 1 through 5, the middle layer consisted of fruiting nodes 6 through 10 and the lower layer consisted of nodes (fruiting and vegetative) 11 through 15.

The acephate treatment did not affect the preference for fruiting form type. The vertical distribution of nymphs within the upper levels (nodes 1-5) and middle levels (nodes 6-10) was not significantly different between the pretreatment and 72-hours-after-treatment samples on nontreated plants. On insecticide- treated plants, significantly fewer nymphs were observed on fruiting structures in the top layer compared with the number recorded on fruiting structures within the middle level. Acephate did influence vertical distribution of tarnished plant bug nymphs at 72 hours after treatment because a greater number were detected lower in the plant profile on the treated plants.

These results support the use of a whole-plant sampling protocol such as the shake sheet for estimating tarnished plant bug infestations after insecticide treatment. This procedure is more likely to detect tarnished plant bugs throughout the entire plant profile. The most common sampling tool for this pest has been the sweep net, which only samples the upper few nodes of cotton plants. The sweep-net procedure likely underestimates infestation levels, especially after an insecticide application and may result in an incorrect assessment of product performance. This information should be used in conjunction with results from ongoing studies to further refine sampling protocols and action thresholds for tarnished plant bugs on reproductive-stage plants in cotton fields.