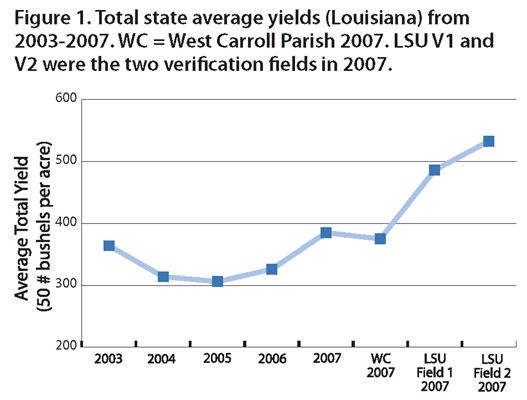 Louisiana ranks third in total sweet potato acreage planted in the United States, producing approximately 15,000 acres in 2007 and 2008. In 2007, the farm-gate value of the crop exceeded $65 million, and the value added after processing and packaging exceeded $112 million. 2008 was not a representative year because of severe crop loss caused by hurricanes Gustav and Ike.

Gross producer revenue from 2005 to 2007 averaged roughly $3,633 per acre, making sweet potatoes the most lucrative row crop in Louisiana (gross revenue per acre). With production, packaging and storage costs ranging from $2,000 to $3,500 per acre, however, a sweet potato crop also is the most expensive row crop in the state to grow. The variability in costs to growers means a high level of fluctuation in potential profitability. To help address the issues that affect production cost variability, a verification program was initiated in 2007.

Sweet potato production is a year-round process. Production starts in early spring when seed potatoes saved the previous year are bedded in plant or seed beds. Transplants – or "slips" – are cut from these plant beds after five to seven weeks and then planted into production fields from late April-July. The sweet potato crop matures in 100-120 days, and harvest occurs from late July-November.

The sweet potato verification program includes commodity storage and marketing components. Sweet potatoes are unique in that they are stored on the farm and are sold, packed and shipped to markets throughout the year. As such, in addition to tracking and monitoring the traditional cultural and production practices, the sweet potato verification program also monitors packaging and stor age issues to establish the relationship between these functions and profitability.

The verification program was initiated in 2007 on a West Carroll Parish farm. The program was repeated in 2008 in the same fields and also was instituted in a 25-acre field in Evangeline Parish, which is in south Louisiana. The participating producers and AgCenter personnel recorded and collected information on inputs, equipment, labor and the time required to conduct each activity. In addition, information on land rent, crop consultant fees, crop insurance and other direct costs were collected. LSU AgCenter enterprise budgets were used in conjunction with these data to develop estimates of the cost associated with each activity. Finally, information on monthly packaging and storage costs and other associated marketing costs was collected along with monthly sales volumes and prices.

Costs associated with the verification program fields were separated into variable and fixed production costs. Variable costs include items such as fertilizer, chemicals, labor, fuel and machinery ery repair and maintenance. Fixed production costs include interest expense and machinery depreciation and are calculated using AgCenter enterprise budget assumptions. Based on these costs and revenue information from the participating producer, estimates of returns to the operation are developed.

The verification program produced valuable information in 2007. Both verification fields outyielded the state total average yields for 2003-2007 (Figure 1) and also exceeded the West Carroll Parish yield average in 2007. U.S. No. 1, the premium marketable yield grade for sweet potatoes, accounted for more than 65 percent of the total yield in both fields. Total production costs (direct, operating interest, fixed and packing line) were estimated at approximately $2,700 per acre for each field in 2007, and estimated returns above cost were approximately $2,000 per acre. All revenue information was generated assuming a 65 percent of the roots that were packed met U.S. #1 grade standards and were marketed as such.

Knowledge gained from this program can be used to improve and further develop recommendations for sweet potato production, with an end goal of improving the sweet potato industry in Louisiana and ensuring that producers remain successful.

Acknowledgment
The authors wish to thank cooperating producers including Ted and Sharon McDermott of McDermott Farms in West Carroll Parish and Larry, Earl and Lonnie Fontenot of E & L Produce in Evangeline Parish.