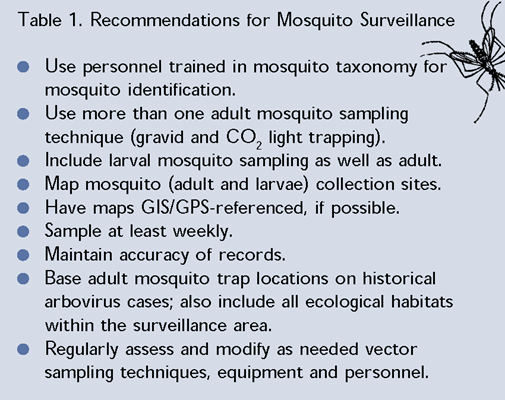 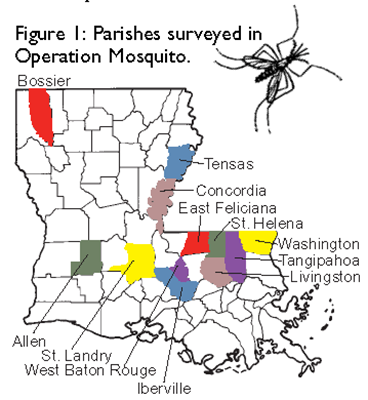 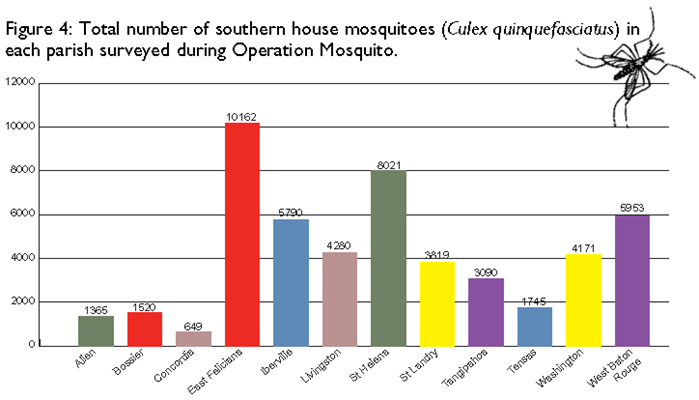 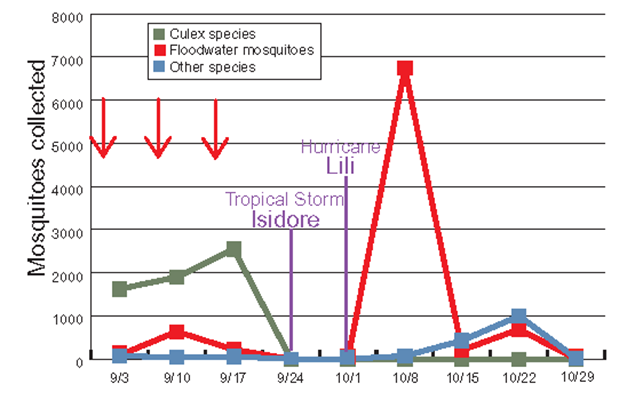 The tropical and subtropical climate in Louisiana creates conditions that support mosquitoes year-round. Mosquitoes are not only a nuisance but, more important, can transmit several diseases to people and domestic animals when biting for a blood meal. Louisiana is historically host to several viral mosquito-borne diseases such as St. Louis encephalitis, eastern equine encephalitis and LaCrosse-California encephalitis. As recently as 2001, West Nile virus was first reported in the state. In 2002, Louisiana ranked among the top five states in the nation in number of West Nile encephalitis cases, and first when cases per inhabitants were taken into account.

The outbreak of West Nile virus in Louisiana in 2002 led to a cooperative venture between the LSU AgCenter and the Louisiana Department of Health and Hospitals Office of Public Health (DHH/OPH).

In the summer of 2002, DHH/OPH funded a team of LSU AgCenter entomologists and other personnel to conduct Operation Mosquito, the mosquito surveillance component of the AgCenter’s West Nile Virus Mosquito Program. Team members, led by entomologist Michael Perich, collected mosquitoes in 12 parishes that had reported a human case of West Nile but were without organized mosquito abatement programs. The purpose was to determine what potential vectors of West Nile were present and to gather information on the mosquito abundance in these parishes.

For each of the parishes, 10 sites in proximity to reported West Nile cases and also representing the various ecological habitats within that parish were selected for samples. Sampling was initiated on Sept. 3, 2002, for eight parishes (Allen, East Feliciana, Iberville, Livingston, St. Helena, Tangipahoa, Washington and West Baton Rouge) and the other three parishes on Sept. 10, 2002 (Bossier, St. Landry and Tensas). See Figure 1.

Mosquitoes were collected three times a week for nine consecutive weeks, using gravid traps (Figure 2) and miniature light traps (Figure 3), both in urban and rural areas near confirmed human West Nile cases. Gravid traps were used to assess the presence, distribution and abundance of the southern house mosquito (Culex quinquefasciatus), the principal vector, which means carrier, of St. Louis encephalitis and West Nile virus, and the Asian tiger mosquito (Aedes albopictus), also a vector of West Nile. Light traps were used to determine what other potential mosquito vectors were in each parish. In addition, ovitraps were deployed to sample for the Asian tiger mosquito. The collaboration of the county agents, who operated the traps, sorted and delivered the mosquitoes to the AgCenter medical entomology laboratory for identification, was essential for the success of the project.

More than 160,000 mosquitoes were collected in the combined CDC light traps and gravid traps, representing the 10 genera of mosquitoes known to occur in Louisiana, and 43 of the approximately 64 species reported for the state. Not all species were present in every parish, and their relative importance in terms of number of mosquitoes collected varied as well (Figure 4).

Because of this variation in the mosquito populations, the approaches to mosquito control will be different for each parish. For example, in more urban areas with higher populations of container-breeding mosquitoes (such as the Asian tiger mosquito), parish officials will have to invest more time and resources in sanitation and public education campaigns. In more rural areas, they need to target natural mosquito habitats such as rice fields and poorly drained areas.

Some factors affected the total number of mosquitoes collected, such as spraying for mosquito control in five parishes (East Feliciana, Livingston, St. Landry, Tangipahoa and Washington) by the Louisiana Department of Agriculture and Forestry. Collections had to be interrupted on a few occasions because of tropical storm Isidore and Hurricane Lili. The number of mosquitoes, specifically floodwater mosquitoes, increased dramatically in weeks following the tropical storm and hurricane (Figure 5).

The information gathered during Operation Mosquito provides a starting point for the organization of mosquito abatement programs. We know what mosquito vectors and nuisance species are present in each parish. Besides the survey, a series of recommendations for arbovirus vector surveillance were provided as part of Operation Mosquito (Table 1).

A further project developed by the AgCenter and funded by DHH/OHP, with input from the Louisiana Mosquito Control Association and its technical advisory committee and the Louisiana Office of Agricultural and Environmental Sciences of the Louisiana Department of Agriculture and Forestry, has resulted in a template for organizing and instituting mosquito abatement districts, known as the Louisiana Mosquito Abatement Plan or LaMap. The LSU AgCenter is working closely with parishes involved in Operation Mosquito to adapt LaMap to specific needs and budgets and to help officials apply for special funding.