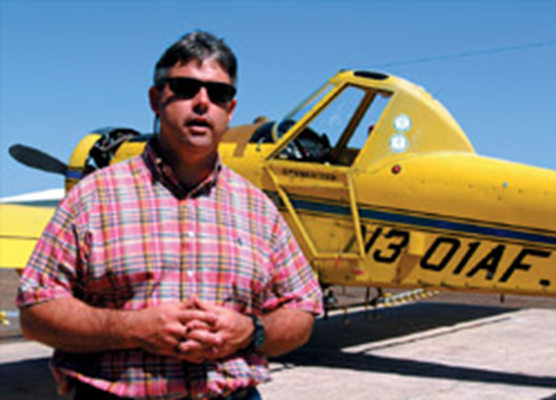 Ralph Bagwell, above, and Roger Leonard are the lead LSU AgCenter scientists in this precision agriculture project. (Photo by John Wozniak) 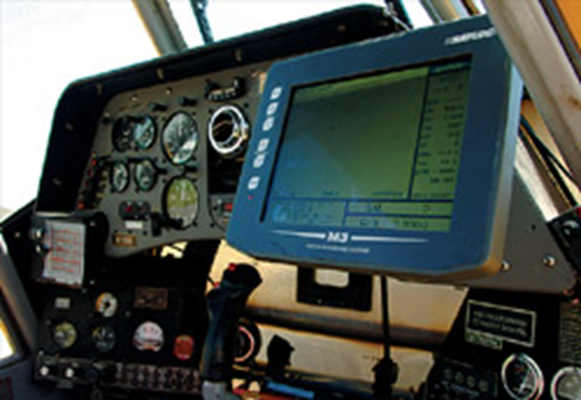 The computer in the cockpit controls when the sprayer nozzles (below) are turned on and off. (Photos by John Woznaik) 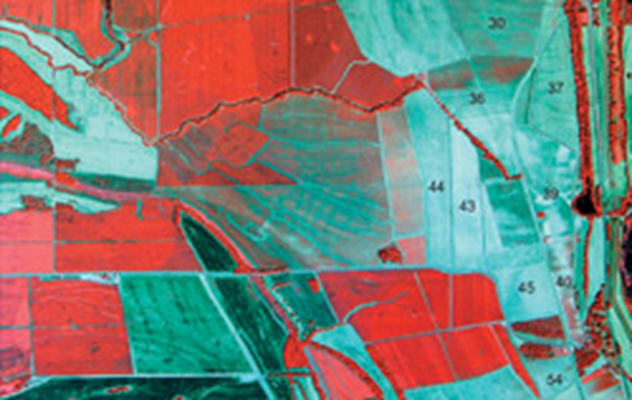 Shot from 12,000 feet, this aerial photo indicates through color where there is plant vigor. This can help determine where insect pests are. (Photo by John Wozniak) 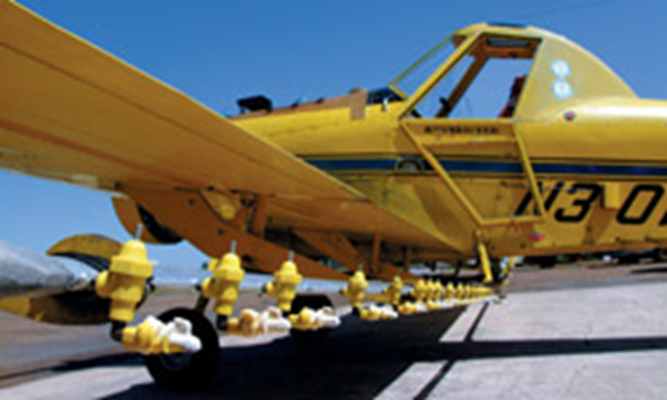 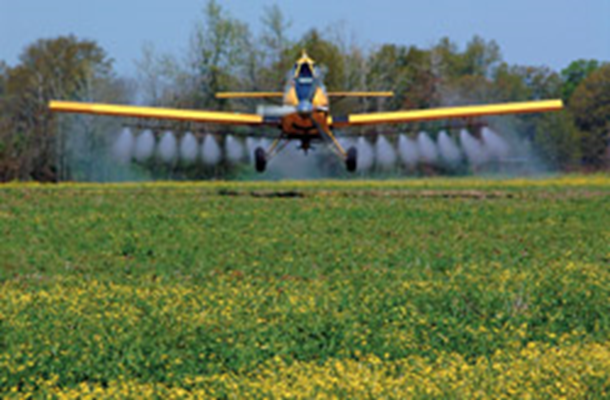 LSU AgCenter scientists are experimenting with technology that will make it possible for aerial applicators to spray precisely what’s needed over every square foot of a field. Their aim is to make this technology usable and affordable for farmers. (Photo by John Wozniak)

Geospatial tools offer great promise of increasing profitability of cotton production. These tools, however, must be adapted to the specific agronomic and plant protection needs of cotton production and made available in a user-friendly format that can be easily transferred to producers, commercial pesticide applicators and agricultural consultants.

In 2002, a multi-disciplinary team including LSU AgCenter scientists initiated a project to develop spatially variable pesticide applications based on remote sensing to improve the efficiency and profitability of cotton production. The objectives of the study are: 1) to correlate arthropod densities with field growth patterns, 2) to apply spatially variable pesticide applications to targeted zones in a field, 3) to perform economic comparisons of precision farming techniques to conventional plant protection strategies and 4) to develop and disseminate educational programs on the efficiency and value of precision agriculture techniques.

The study is being conducted at Hardwick Planting Co. near Somerset, La. Images are gathered with fixed wing aircraft flown at 12,000 feet. These multi-spectral images are geo-referenced and used to create a Normalized Difference Vegetation Index (NDVI) of the study site, which provides an estimate of plant vigor.

To determine economic value of this technology, insecticide applications are compared with traditional broadcast applications when arthropod densities reach the treatment threshold. Areas selected for variable rates are determined by multi-spectral imaging. Generally, insecticides are applied to areas indicating high plant vigor (60 percent to 80 percent of the field) and not applied to areas with the lowest plant vigor. Four paired cotton fields (75 to 120 acres) are treated with either the variable or traditional sprays. Lint yields and production costs are then compared for the two treatments.

The third evaluation looks at yield history to determine areas where pesticide applications are rarely justified. Geo-referenced historical yields are identified and pesticide exclusion zones are created in low-yielding areas. Three to four replicates of these treatments are compared with traditional whole-field sprays. Lint yields and production costs are then compared.

These research results will provide the basis for integrating geospatial technologies into the current cotton production system. A demonstration program will be developed for producers, pesticide applicators and agricultural consultants on the efficiency and value of precision agriculture in cotton IPM. The results of this project will contribute the necessary information to integrate geospatial technologies into current IPM systems. The days of the “pesticide treadmill” with its disastrous results of pest resurgence, secondary pest outbreaks and environment contamination in cotton production systems may be eliminated if a base of information can be developed to support the appropriate development of these technologies.

(This article was published in the 2003 spring issues of the Louisiana Agriculture magazine.)