Supplemental fungicides can be added to cottonseed in the hopper, known as hopper box treatments. (Photo by Mark Claesgens) 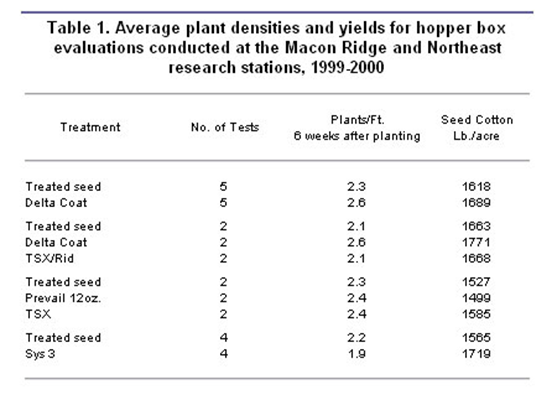 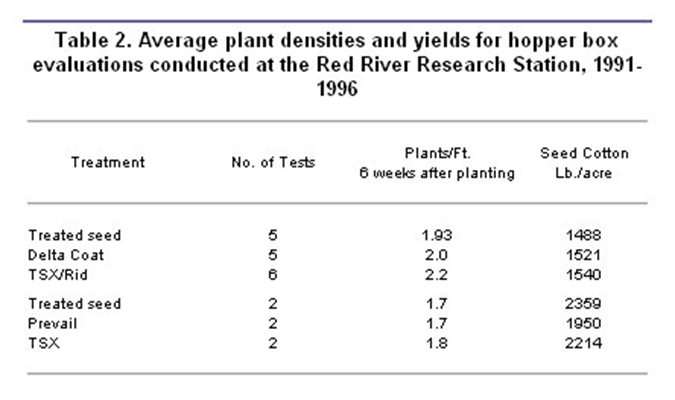 Cotton seedling diseases, caused by fungi, can reduce seedling emergence and plant establishment. The fungi commonly found attacking cotton in Louisiana are Rhizoctonia, Fusarium and Pythium. The detrimental effects from these pathogens are typically non-uniform plant populations and reduced plant vigor. In severely damaged fields, producers may be forced to replant, costing time, money and yield potential. In 2000, statewide losses to seedling diseases were estimated at 3 percent, or $7,051,832. Producers manage seedling diseases using cultural practices and fungicides. Cultural practices that help avoid or reduce the incidence of seedling disease include planting when conditions are conducive to rapid seed germination and seedling emergence. Conditions are considered favorable when the 4-inch soil temperature is 65 degrees F or higher for three consecutive days, and there is no approaching cold front or excessive rain. The weather during the planting period of April and May, however, is unpredictable and extremely variable.

Fungicides help protect cotton from the effects of seedling disease pathogens. Fungicides are present on the seed at purchase, and supplemental fungicides can be applied to the seed in the hopper, known as hopper box treatments, or in the furrow at planting. Though limited by the amount of material that adheres to the seed, hopper box applications are relatively easy to perform and cost from $1.68 to $4.50 per acre. In-furrow fungicides treat the seed as well as the surrounding soil and cost from $4.35 to $22.00 per acre.

While hopper box and in-furrow applications of fungicides are effective, they may not always be economical. Therefore, to determine the efficacy of hopper box applications as options for seedling disease management, experiments were conducted at the LSU AgCenter’s Macon Ridge, Northeast and Red River research stations. Fungicides Delta Coat AD (Wilbur-Ellis), Prevail (Trace Chemical Inc.) and System 3 (Setre Chemical Co.) were evaluated in 28 field tests conducted from 1991 through 2001.

Delta Coat AD was applied at 11.75 fluid ounces per 100 pounds (cwt) seed; Prevail at 12 ounces per cwt seed; and System 3 at 12 ounces per cwt seed. In three tests at the Macon Ridge location, disease pressure was enhanced with an at-planting, in-furrow application of inoculum. During this 11-year period, planting dates ranged from April 2 to May 13. Hopper box treatments were compared with commercially treated seed and in-furrow applications of Ridomil PC or Terraclor Super X at recommended rates.

Four template studies were conducted at the Macon Ridge Research Station. These plots consisted of 50 seed arranged in 10 rows, five seed per row spaced 1.5 inches apart, of a selected seed treatment. Plant emergence was recorded from six to 32 days after planting.

Hopper box applications increased plant density over commercially treated seed in 25 percent of the tests and resulted in an increase in yield in 6 percent of the tests. The performance of hopper box fungicides was similar to in-furrow applications of TSX or Ridomil-PC. However, in-furrow fungicides treat the seed and surrounding soil, covering a more extensive area than hopper box applications. This increased efficacy of hopper box fungicides over commercially treated seed is most likely related to environmental conditions at planting. Consequently, planting during favorable conditions for rapid seed germination and seedling emergence should be the first line of defense against seedling disease. If cool, wet conditions prevail, additional fungicides can help preserve plant populations. These increases in plant density rarely translate to increased yield because many other factors affect plant development and yield after planting.