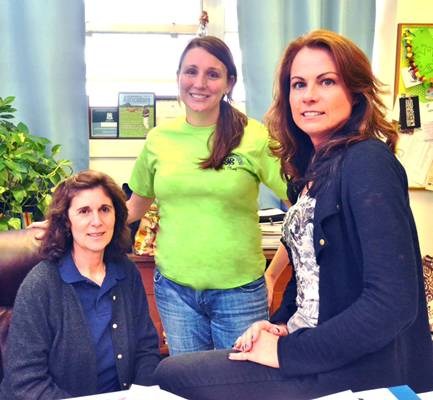 The Louisiana Wildlife Federation has chosen Adriana Drusini, far left, and Jennifer Ducote, center, both LSU AgCenter 4-H agents in St. Mary Parish, along with Catherine Siracusa, St. Mary Parish bear conflict officer, for the Governor’s Conservation Award for their Black Bear Awareness Program. They will receive the award on Feb. 23 at the LWF convention in Baton Rouge. Photo by Bruce Schultz

FRANKLIN, La. – A 4-H project aimed at helping St. Mary Parish residents avoid troublesome encounters with black bears is being honored with an award from the Louisiana Wildlife Federation.

“This award demonstrates the LSU AgCenter’s eagerness to help communities deal with real-world problems and at the same time benefit our youth,” Coreil said. “This program shows what a cooperative spirit and hard work will accomplish.”

The three women put together a plan to educate 4-H Club members about black bears, and it was expanded to inform the public how to bear-proof their neighborhoods, with 4-H Club members spreading the word in an information campaign The number of black bears has increased in St. Mary Parish, and complaints from residents about nuisance bears had become more numerous until the 4-H Club started the campaign.

In areas where the bear has been a nuisance, such as Patterson, 4-H Junior Leader members hung information packets on residents’ doors. The material explained how to avoid attracting bears and why leaving food for bears is not a good idea. Other tips included how to make sure that garbage cans are secured and clean and the importance of keeping pet and bird food away from bears. Siracusa’s contact information also was provided.

“We got a lot of phone calls from people thanking us for the information,” Ducote said. “And the trash company was so excited that we did it.”

Siracusa said the help of the 4-H Club has made her job easier, and the number of complaints dropped dramatically after the information campaign started. “It’s a perfect match because I need a volunteer base,” Siracusa said. “The 4-H’ers have been a big part of this program.”

Siracusa said her job was created because of the large number of calls from residents complaining about nuisance bear incidents.

The bears aren’t a safety threat, but they cause headaches and sometimes give residents a fright.

She said the Louisiana black bear population is around 100 in St. Mary Parish. “It’s not that big of an area to have that many bears. Normally, their territory ranges from 8 to 25 miles.”

Siracusa said bear-proofing garbage cans with special latches has been effective, and residents are being reminded in the campaign to make sure lids are securely closed. “When the bears can’t get in them, they don’t come back.”

“In April we are going to go to Berwick and do the same campaign to make the residents aware of what is going on,” Drusini said.

Roughly 500 kids have been involved in the bear program, and that includes more than 30 Junior Leaders.

Also, the kids help with the Black Bear Festival in Franklin, which will be held April 19-21 this year.

A curriculum to teach students about black bears has been made available to science teachers, and an upcoming workshop for teachers is full.

“We put on boots and went into the refuge,” Ducote recalled. “Some of the kids were pulling up tires and refrigerators.”

“That was an eye-opener because the kids never realized how much trash there is on the side of the road and at the boat landings,” Drusini said.

Numerous federal and state agencies have worked with the 4-H Club on the program, including the Natural Resources Conservation Service, Louisiana Wildlife and Fisheries, U.S. Fish and Wildlife Service, Farm Service Administration and the St. Mary Soil and Water Conservation District.

“You cannot survive by yourself,” Drusini said. “You have to network,” adding that several LSU AgCenter employees have helped the program.

“And the St. Mary Parish School Board has been great about letting us go into the schools,” Ducote said.

The program was well-received at the Chitimacha Reservation, especially because the tribe reveres the black bear as a sacred animal.

The St. Mary Parish 4-H Junior Leaders are raising money to go to a plant science facility at Golden Meadow where they will learn more about marsh ecology.

Because funds are low, it’s difficult to come up with projects that can be used by 4-H clubs, Drusini said. “It’s been a great service learning project.”

The black bear has been adopted as a mascot for the parish 4-H Club, appearing on club T-shirts.

This isn’t the first time the program has won an award. In 2012, the 4-H Club’s efforts were honored with the LSU AgCenter’s Rosalie Bivin 4-H Faculty Award and the Excellence in Teamwork from the Louisiana Association of Extension 4-H Agents. Drusini said the $250 that came with the award was used in the black bear program.

The program has attracted newspaper attention, and Louisiana Public Broadcasting was in St. Mary Parish for a television segment on the bear program.

But the St. Mary Parish 4-H Club isn’t sitting on its laurels after getting this award. In the planning stages is an awareness program to teach the public about the whooping crane program that was started at White Lake.