Legacy of Robert Godke: "It is stunning when you look at it"

When Robert A. Godke Jr. died in 2015, he was remembered as a giant in the field of reproductive physiology.

A Boyd Professor — the highest honor bestowed at LSU — and a lauded LSU AgCenter researcher, Godke’s legacy lives on in reproductive physiology textbooks and academic journals and in the work of his students.

“When you talk about landmark people that were responsible for founding a field, I like to believe Robert Godke was that, irreplaceable and permanent in that field,” said his son, John Godke, a Baton Rouge pulmonologist.

For four decades, while Godke led the reproductive physiology program at the AgCenter, he and his researchers made influential breakthroughs in genetic engineering, cloning, infertility research and embryo transfer.

Godke mentored dozens of graduate students, a tightly knit group who would call themselves his Repro Rangers. Through these students, who would go on to work not only in the animal and veterinary world but in human reproduction, Godke’s legacy stretches well beyond the lab, according to his daughter Beth Godke Koonce, an assistant professor of English at Ohio University.

“His legacy is endangered species, and I think his legacy is infertile couples worldwide who are benefitting from his technology,” Koonce said.

From Farm to Lab

Born in 1945, Godke was raised with four brothers and a sister in the farm town of Kewanee, Illinois. Their father worked three jobs, Koonce said, while their mother worked tirelessly at home.

“The only sin was to be lazy, really,” John Godke said.

Life on the farm and participation in a 4-H Club raised Godke’s interest in agriculture. As he finished high school, a counselor instead encouraged him to attend a vocational school, John Godke said.

“He didn’t like for people to tell him he couldn’t do something,” he said.

But during his freshman year at Southern Illinois University in Carbondale, Godke struggled, his children said. “He wasn’t going to class,” Koonce said. “He was having trouble adjusting.”

His girlfriend and future wife, Nancy Lynn Ebbert, encouraged him to grow into a better student, Koonce said, and her brother helped Godke with study schedules and attendance.

Then he was able to meet his potential.

Godke and Nancy Lynn married while in college in 1965. After graduating from Southern Illinois with an animal science degree, Godke joined the U.S. Army Medical Service Corps and became a captain, serving two years before returning to the university to complete a master’s degree in animal physiology.

The success Godke found encouraged his younger siblings, who all found success in other fields, his children said. That perseverance would one day influence his own children, too.

“One thing we really all learned was grit,” Koonce said. “Success in life is grit, and we learned that from him.”

At the time researchers were artificially inseminating animals and were beginning to work with transferring embryos, Godke said in a 1998 interview, using tools now widely used throughout the world. He and his graduate students helped perfect nonsurgical techniques for transferring cattle embryos into surrogate mothers. They then further developed the procedure for other animals.

They worked with freezing embryos for later use, a technique called cryopreservation, and in vitro fertilization, a way of fertilizing eggs outside of the body.

Godke’s team researched embryo splitting, a way of producing genetically identical animals from one embryo, and in 1982 they produced their first sets of identical calves — clones — using the technique.

This drive to achieve emanated from Godke’s perfectionist traits, his children said. Because he expected the best from himself, there was always more to accomplish.

Not every idea of Godke’s became a success. A few graduate students, including Glen Gentry, who is now the resident coordinator of the AgCenter Bob R. Jones-Idlewild Research Station, worked on a project called the estrus gate, a practical device that would separate a cow in heat — Godke hated that description, Gentry said, calling it “cowboy talk” — from a herd so she could be artificially inseminated. It never quite worked well enough. Richard Denniston, the former director of the LSU AgCenter Embryo Biotechnology Laboratory who worked with Godke for 20 years, also remembers an idea of culturing cattle embryos in chicken eggs, an incredibly difficult procedure.

In the late 1990s, Godke and his students found success when they helped produce the world’s first cloned transgenic goats. Born through a partnership with Genzyme, a biotechnology company, the goats produced milk with a protein that could be used to make a drug to prevent blood clotting.

“Twelve goats can make the world’s supply of some of these products,” Godke said in a 2011 interview.

Outside of the lab, Godke was “was a natural-born teacher,” John Godke said. He taught undergraduate classes on reproduction and advised more than 100 graduate students.

In the classroom, the normally reserved Godke was energetic and entertaining, John Godke said, telling jokes and stories.

He loved reproduction-oriented paraphernalia, including African fertility statues and a coin purse made from a kangaroo scrotum. Once Godke’s graduate students replaced the pointer used during his lessons with a shellacked bull’s penis. He used it the rest of his career.

Throughout his career Godke received teaching awards from LSU and the state of Louisiana, and in 1994 he won a national agriculture teacher of the year award from the USDA. In 1995, he was named a Boyd Professor, the highest honor an LSU professor can receive.

Godke was not only a university teacher, Gentry said. He could also connect directly with those whose livelihoods depended on livestock.

“He could sit and talk about embryonic stem cells and what it meant for medical advances,” Gentry said. “But he could turn around and go to a cattlemen's meeting and talk to a guy who runs cows and might not even have a bachelor’s degree. And they would understand.”

Godke’s graduate student meetings were legendary. He regularly met with students late into the night and would take them to task, while also encouraging them. His favorite students were those who may not have had the highest GPAs but were creative and hard-working.

“And he basically enjoyed whipping their butts into shape,” Koonce said.

Gentry was such a student.

“He could gauge people, and the academic side of things were very important,” Gentry said. “But he also saw the other stuff, the work ethic.”

Koonce remembers her mother, who was a gifted and dedicated elementary school teacher, estimating to a census worker that Godke worked 100 hours a week. He would go to work in the morning, teach, then return home for dinner with his family. After that he would take a nap on the couch. When his three children — Beth, John and Jennifer — went to bed, he would return to the lab until 2 or 3 a.m.

“This was every day of the year,” Koonce said, “except Sunday and Christmas.”

In the early years of reproductive physiology, animal scientists and cowboys were interested in the science of artificial insemination, Godke said in a 2011 AgCenter interview. They saw an increase in the genetic quality of cattle, which led to larger beef herds.

Students from Godke’s lab also ventured into exotic animals, and in the 1990s, students began working with the Audubon Nature Institute to learn to use common animals as surrogates for endangered species.

“Really it became clear that the most qualified embryologists to run and operate human IVF (in vitro fertilization) labs were, in fact, animal scientists,” Denniston said.

And many of these students became wealthy. Some friends and family wondered why Godke didn’t use his expertise to make more money as a consultant later in life, John Godke said.

“He told me once that when people give you money, they own you,” John Godke said. “He wanted to do research the way he was going to do it.”

After his father died, John Godke was cleaning out his office and found a drawer full of checks. Former students had tried to pay Godke back for money he had lent them.

“Thousands of dollars in checks,” John Godke said. “He didn’t cash any of them.”

After his wife Nancy Lynn died in 2006, Godke became semiretired, which meant he worked 40 to 50 hours a week, John Godke said.

“I just think he had to have that in his life,” John Godke said. “And even when he was sick, he was still going to the office and doing as much as he could.”

Godke remarried after connecting with Bonnie Boswell Fjeld, a former classmate from Kewanee. They went to yard and estate sales in search of treasures and filled storage units. Godke loved to fish and take trips to a family cabin in the north woods of Wisconsin. He took fishing seriously, too, and owned a dozen rods and reels and tackle boxes full of lures.

In 2015, Godke was diagnosed with pancreatic cancer. While he took chemotherapy, the diagnosis was dire, and his family knew he had little time left.

On a trip home during Easter that year, Koonce learned for the first time about the extended family of Repro Rangers who loved her father. Stunned by their dedication, Koonce worked with them to establish a scholarship in her father’s memory, the Robert A. Godke Jr. Endowed Scholarship. The Rangers came together in Baton Rouge in August that year to honor Godke and announce the scholarship.

“We knew we were going to lose him, and suddenly there was this sort of admiration and all this fervor and this excitement,” Koonce said.

John and Nancy Lynn Godke’s dedication to hard work and service can be seen in their children. Beth Godke Koonce teaches at Ohio University and specializes in 19th century British fiction while also advising students. John Godke is a pulmonologist who teaches through the LSU Health Sciences Center.And Jennifer Godke Harper teaches kindergarten in the Baton Rouge area.

Friends and family all agree that the clear legacy of Robert A. Godke Jr. is his students.

“The bottom line is he measured his success on the achievements of his students,” Denniston said. “That was the most important thing.”

Those students have spread far beyond the world of animal reproduction.

“Things like infertility, they impact millions of people’s quality of life, and world hunger, changing animals genetically so they can provide milk and meat,” Koonce said. “It’s stunning when you look at it.”

Kyle Peveto is an assistant specialist with LSU AgCenter Communications and assistant editor of Louisiana Agriculture.

Robert A. Godke Jr. became a Boyd Professor in 1995. The professorship is the highest honor an LSU professor can receive. LSU file photo 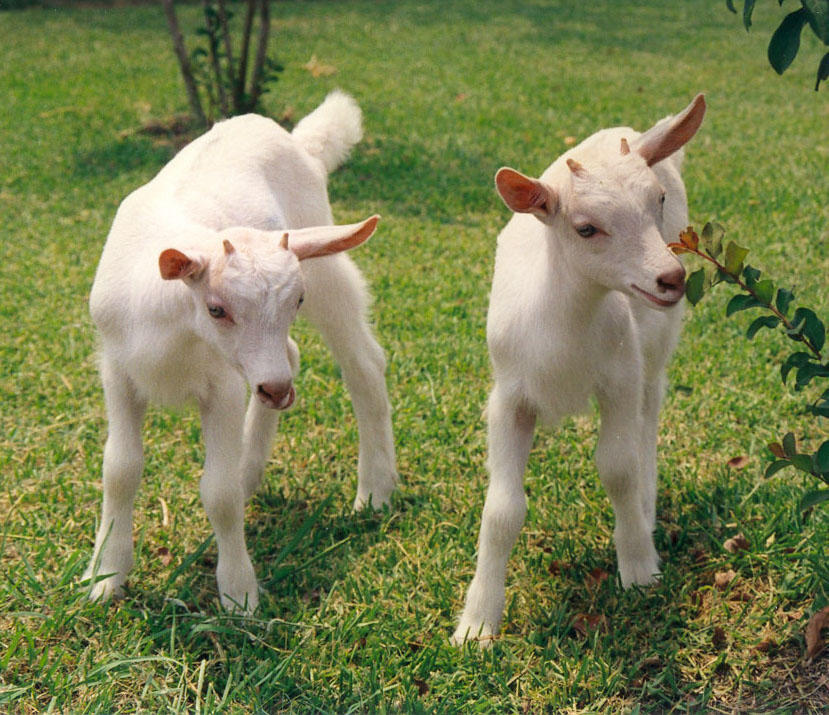 These are two cloned transgenic goats produced in 2004 as part of Robert Godke’s research in reproductive physiology. AgCenter file photo