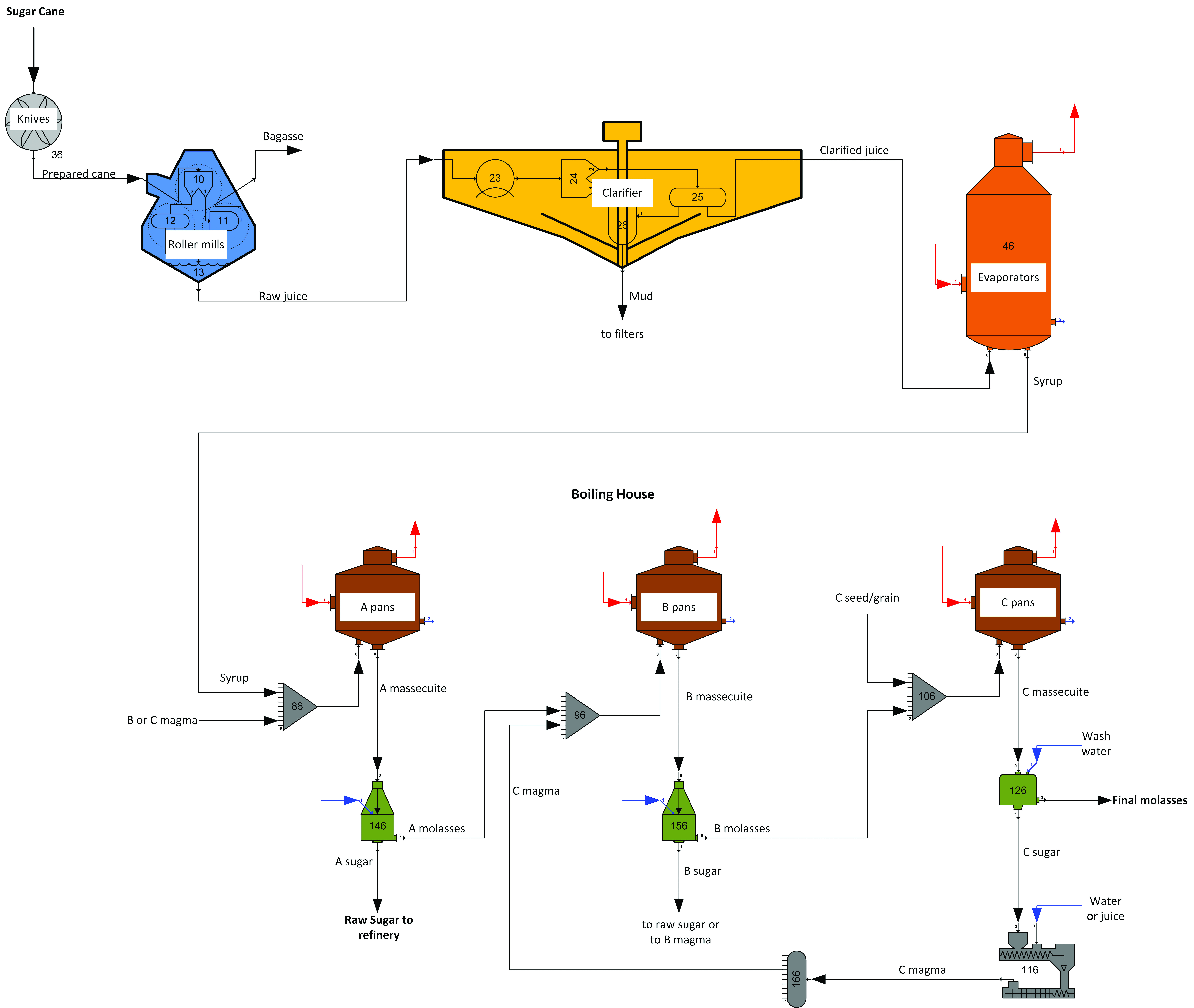 A raw sugar factory recovers sugar (sucrose) from the sugarcane plant in a complex process. A simplified version of this process is shown in Figure 1. The process starts by squeezing the raw juice from the cane in a set of roller mills, or a diffuser. Then, suspended solids settle and are removed in a clarifier. Next, the clarified juice is concentrated into syrup in a set of evaporators. Finally, the sugar in the syrup is crystallized by further evaporation in an arrangement of vacuum pans (boiling house), usually in three stages, also called strikes: first or A, second or B, and third or C.

In a simplified description, once the crystals have achieved a desired size in each stage, the mixture of crystals and mother liquor (massecuite) is passed through centrifuges, known in the sugar industry as centrifugals, to separate the crystalline sugar from the molasses. Molasses moves from one stage to the next (molasses from the third stage is called final molasses). Some of the crystalline sugar is mixed with water (magma) and recycled back into the process. Raw sugar from the first and second stages (three-boiling scheme) or from the first stage only (double magma scheme) is shipped to a refinery where refined table sugar is produced. Control criteria for juices, massecuites, magma and sugar throughout the process include solids content (Brix), sucrose content (approximated by the “pol”), ratio of sucrose to solids content (purity) and color.

Simulation is the use of a model to obtain an output response for specified input values. Simulation can provide better understanding of the process and reduce costs and risks associated with experimentation because there is no need to make changes in physical equipment or operating conditions for every case. In the sugar industry, for example, a model of the entire factory can be used to study changes in the amount of pol in raw sugar produced for different crushing rates and cane pol. A model of the boiling house only can be used to study purity of final molasses for different syrup or magma purities. In general, simulation can be used in the design, operation and optimization of the raw sugar factory for:

Table 1 (below) presents the percentage that simulation results for boiling house models (developed after 2013) deviated from factory data. Deviations up to 41.2 percent were observed in quantities of massecuite and final molasses because some values presented in factory reports are estimated rather than measured. A maximum purity deviation was 12.5 percent. These models have been used to simulate close to 100 cases to study expected raw sugar production and final molasses purity before major changes in boiling schemes or to evaluate changes in process streams. Results were discussed with factory managers and engineers to assist them in evaluating their systems.

Table 2 shows the differences for the diffuser model of Enterprise factory. Deviations of simulation purities from factory data were less than 6 percent, indicating that the model is a good representation of the diffuser section.

Large and variable processes will generally have simulation results with higher deviations from factory data than simple processes. In the raw sugar factory, there are uncontrolled changes in the impurity content of juice, viscosities and pH, among others. Additionally, there are intentional changes in operating conditions such as an increase or decrease in crushing rate, backboiling molasses, increasing wash water in centrifugals, bypassing mills or stopping equipment for maintenance. Oftentimes, these voluntary changes are not recorded explicitly in the manufacturing report, so it is challenging to represent them in the simulation. Nonetheless, simulation results provide useful information to improve operation.

Daira Aragon is an assistant professor at the Audubon Sugar Institute.