Parasite Control in Sheep and Goats 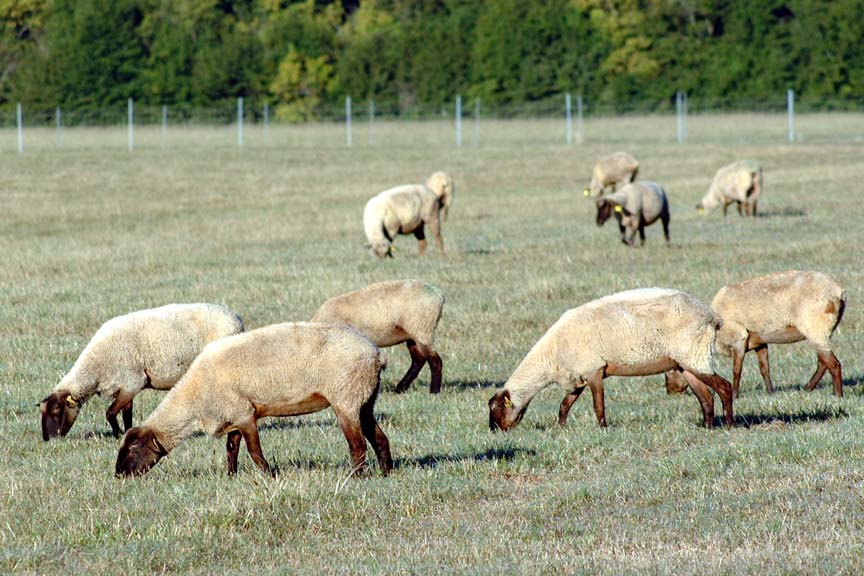 The warm humid climate of Louisiana is an ideal environment for livestock parasites, which makes raising sheep and goats in this area challenging. Sheep and goat producers want their veterinarians to give them a deworming schedule, including how often to deworm, and with what product, and they would like this schedule to work every year in all situations. Unfortunately, with the resistance to dewormers shown by sheep and goat parasites, this is impossible.

Although sheep and goats get numerous types of parasites, Haemonchus contortus (barber-pole worm) is the most clinically significant nematode parasite in Louisiana and the most important with respect to dewormer resistance. This parasite sucks blood from the animal, leaving them weak and debilitated, and with heavy burdens, sudden death is not uncommon. Unfortunately, the long term, heavy use of dewormers has lead to parasite resistance to these products. That means that on some farms, there are no dewormers left that will effectively eliminate parasites. And with the constant movement of animals from farm to farm, these resistant worms are traveling with the animals and contaminating new farms.

Without effective dewormers, we are left with using alternative measures to control parasites in sheep and goats. Control programs are based on proper management of pastures, maximizing nutrition, and limited, proper use of dewormers. Producers need to get away from dewormer use, and move towards management of pastures and better culling practices. Veterinarians cannot give good advice to producers about parasite control without knowledge of the farm environment and management

To make control recommendations, it is essential to know which dewormers might still work on a farm and to what degree. There are two ways to determine this information. The first requires a veterinarian to perform fecal egg counts, deworm the animals, and repeat the fecal egg counts a week later to compare the counts. This has to be done for each dewormer. The second method of resistance determination is the Drenchrite® test offered through The University of Georgia’s Parasitology Lab. Although the cost is ~$400, resistance patterns to dewormers can be determined with one test, which is actually less expensive and labor intensive than the previously described technique.

Once producers have a plan for pasture management, and know which dewormers are still effective on the farm, decisions on which animals to treat and when to treat can be made utilizing the FAMACHA program. This program should only be used for Haemonchus problems, so proper diagnosis is critical. The FAMACHA program calls for examination of the color of lower eyelid, and comparison of the color to a chart. Basically, animals with scores correlating to pale lids are dewormed, and those with more normal pink color are not dewormed. This process is performed every 2-4 weeks depending on season and weather conditions (more often in warm weather). Records should be kept on which animals were dewormed and with what product. Animals requiring repeat dewormings should be culled which leads to selection of parasite resistant animals. And, since those animals showing the worst clinical signs have the biggest parasite burdens and shed the most parasite eggs, culling these animals helps decrease pasture contamination and eliminates parasite susceptible animal genetics from the herd which can be inherited. “Smart Drenching” is recommended in conjunction with FAMACHA, which gives guidelines as to how to properly use dewormers to get maximum effects.

Keeping resistant parasites off the farm is critical. The fastest way to get dewormer resistance on a farm is to buy it. Quarantine of newly purchased animals and proper deworming is recommended before tuning out with the rest of the flock.

Research is underway at LSU and other groups in the southeast to determine novel ways to control parasites. For more information on FAMACHA, Smart Drenching, and current research, visit American Consortium for Small Ruminant Parasite Control website.