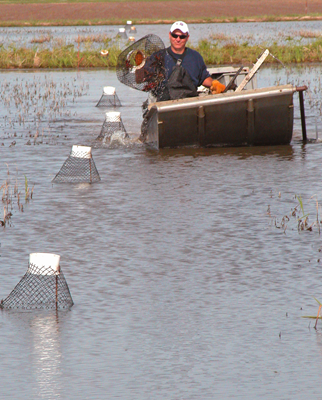 One of McClain's research pursuits is determining what wire mesh is the best for trapping. 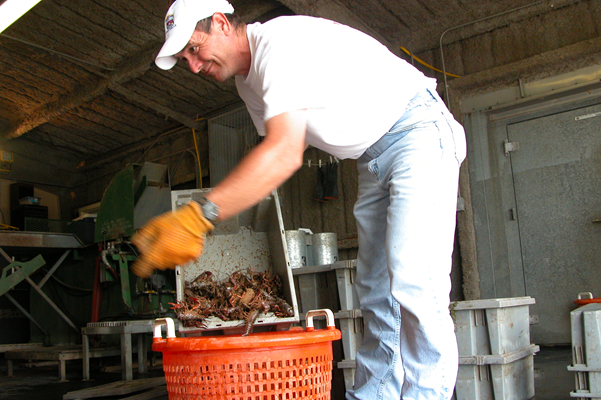 Dr. Ray McClain says farming crawfish is all about replicating conditions of their natural habitat.

CROWLEY – Aquaculture professor Dr. Ray McClain studies crawfish at the LSU AgCenter’s Rice Research Station near Crowley, but he rarely makes a meal out of his subjects.

"Once or twice a year is enough for me," McClain said of actually eating crawfish.

McClain farmed crawfish in Texas and was a partner in a restaurant and catering business before he returned to academia to get his doctorate. Along the way, he says he lost his appetite for what many consider a delicacy.

Now he studies what crawfish prefer to eat or what wire mesh is the best for trapping them or what conditions lead to the best reproduction rates.

"My research encompasses anything and everything," the LSU AgCenter professor said.

McClain is one of three crawfish researchers in the state – and one of only a handful in the nation. Because of the scant volume of research, McClain said he’s had to develop many of the protocols for his work.

So to start a study on how crawfish burrow in the soil, work had to start from scratch using PVC pipe to simulate field conditions.

The LSU AgCenter researcher says farming crawfish is all about replicating conditions of their natural habitat.

"Basically, all we’re doing is mimicking the conditions they’ve evolved with, but with more control," he said.

Farming crawfish is unlike working with other crops that can be monitored during a growing season for such things as disease and size, McClain pointed out.

"Until we start trapping, we don’t know for sure what we have in the ponds," he stressed.

McClain is working on methods to help farmers with efficiency. Harvesting is the costliest undertaking of the crawfish producer, he said.

"A little bit of tweaking here and there can make a big difference in the amount of profit," he said.

For example, he’s found that using square wire mesh instead of hexagonal mesh to make traps results in sturdier construction that lasts longer and retains more crawfish – even smaller ones that could slip out of the same size hexagonal mesh.

Small crawfish are acceptable early in the season, according to McClain, who said consumers are clamoring for a hot plate of steaming crawfish at that time, even if they’re small.

In addition, he said reducing the density of the crawfish in a pond early in the season is better for the crawfish population in the long run, because more food is available.

McClain also is trying to figure out if there’s an alternative bait to use in catching crawfish during the wintertime. In warmer months, he said crawfish will respond to manufactured bait, but they won’t touch the stuff during colder weather. When it turns cold, crawfish appear to prefer fish, such as shad or pogies, as bait – and those require refrigeration.

"There’s something about fish that attracts crawfish better than manufactured bait," McClain said.

A trial using manufactured bait consisting of high-protein fish meal and fish oil didn’t work as well as the real thing, he said.

In an attempt to find out why, he has learned that heating bait fish in an oven to dry it resulted in a bait that wouldn’t attract crawfish, but freeze-dried fish was almost as effective as fresh bait. He said it’s possible that heat generated during the pelleting process damages the attractants that crawfish find desirable in cold water.

"We can’t really confirm this without more studies," he said.

McClain said so far all the processes used to make bait generate some heat.

A new rice variety, Ecrevisse (French for crawfish), has been developed by the LSU AgCenter, exclusively for crawfish farmers. It is intended as nutrition for organisms that are food for crawfish, McClain said, although sometimes crawfish also feed on decaying plant material.

"I look at it (Ecrevisse) as the fuel that drives this complex food chain, with crawfish at the top of the chain," McClain said.

Apparently there is a demand for the variety. All Ecrevisse seed produced at the LSU AgCenter’s Rice Research Station was sold this year to seed growers, according to Larry White, director of the station’s foundation seed program.

Funding for research to develop Ecrevisse came from several sources – among them the Louisiana Crawfish Promotion and Research Board, USDA and the state Department of Environmental Quality.

Ecrevisse is cold tolerant, which means it often will persist longer into winter, unlike conventional rice, and it has good potential for regrowth the following spring.

The new variety has been shown to increase crawfish size, McClain said.

"We’re fairly confident that Ecrevisse, managed properly, will increase yields in many situations," he said.

Now that Ecrevisse is developed, McClain is turning his attention to crawfish reproduction.

"It’s one of the areas we probably know the least about," he said.

He wants to learn what factors influence reproduction success. It’s a collaborative project with Dr. Robert Romaire, another LSU AgCenter aquaculture professor, and Jay Huner, director of the Crawfish Research Center at the University of Louisiana at Lafayette.

McClain’s assistant, John Sonnier, runs the traps, counts and weighs the crawfish before grading and bagging them. He also carries out much of the research work, such as digging up crawfish in their burrows to learn more about their biology.

Like McClain, he’s worked in the field so much that he’s lost his appetite for boiled crawfish.

Sonnier has been on the job since 1992, and he said he’s still learning about the crustaceans.

"The more you learn, the more you find out what you don’t know," Sonnier said.

The experts also provide this information on myths that persist about cooking crawfish. For example:

–Myth No. 1: Pour salt on crawfish to purge them. "In reality, the salt doesn’t do anything," McClain said. Fully purging crawfish can be accomplished only by placing them in an aerated water bath for up to 24 hours, but washing them removes mud and debris.

–Myth No. 2: Don’t eat boiled crawfish that have straight tails because that means they were dead before boiling. Crawfish crowded into the cooking pot can end up with straight tails, according to McClain, and dead crawfish at cooking can have curled tails. Even crawfish that are dead before boiling can be suitable for eating, depending on when death occurred and whether the crawfish were kept chilled. If a crawfish tail feels mushy, it’s probably best not to eat it.

–Myth No. 3: Louisiana’s Red Swamp crawfish are so well-liked as table fare that they’re welcome everywhere. Not so, McClain says. Louisiana crawfish brought to California have flourished, and they are nuisances to California rice farmers. They are destroying native habitat and vegetation in Spain and Portugal. Also, they are immune to a fungal disease that they carry, and it’s killing native species in Europe.