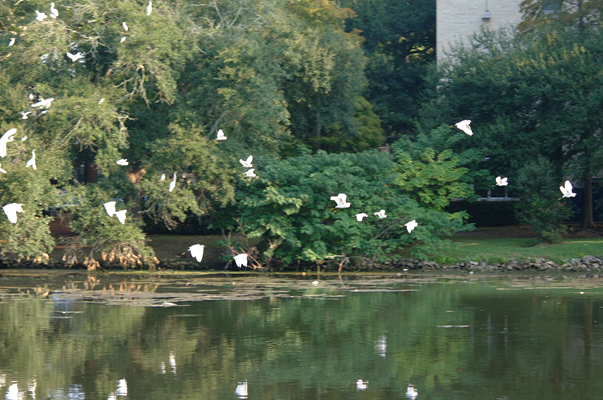 Springtime disease losses in fish ponds are common throughout the Southeast, especially in Louisiana. Low temperatures during winter force fish into a state of slow motion in which they eat little and their immune systems respond slowly. When temperatures begin to rise in the spring, disease-causing organisms already naturally present in a pond can get the upper hand on fish that are in a weakened state. Stress caused by abrupt temperature fluctuations, such as many parts of the state experienced in the past several months, often aggravates fish health problems by further suppressing immune responses. These factors make fish particularly susceptible to other forms of environmental stress during the spring, especially low dissolved oxygen levels.

Many Louisiana ponds experience partial fish die-offs because of a combination of disease and low oxygen stress. Overcrowding, overfeeding or overfertilizing almost always compound these problems. As nutrients accumulate in a pond, most go into solution in the water column where they are used by microscopic plants and animals. Except for situations where excessive weeds are present, most nutrients in the water are taken up by the algae bloom, a collection of microscopic single-celled plants suspended in the water, giving it a greenish tint.

Like all green plants, algae produce oxygen during the daylight as a by-product of photosynthesis. This is usually a major source of oxygen in fish ponds. As pond water warms during the spring and the amount of sunlight increases, algal species that predominated in the bloom during the winter die back and other species more suited to summer conditions multiply and replace them. When this process proceeds gradually, conditions remain fairly stable but, occasionally, the winter bloom dies off abruptly, causing insufficient oxygen levels for several days. This may kill some fish directly or cause sufficient stress to weaken their immune systems. In these cases, bacterial infections usually occur within the next several days to two weeks.

In winter, stratification can break down in some ponds as surface temperatures become more similar to those found in deeper water. This situation can lead to extreme stress on fish. Occasionally, fish kills will occur if bottom waters are mixed too rapidly with the rest of the pond. This type of mixing, referred to as a turnover, occurs when cool rainwater or heavy wind on the pond surface breaks down layering patterns. Turnovers are often observed in natural waters and ponds after severe weather during spring.

Often, dissolved oxygen may reach low levels daily without directly killing fish, but the stress induced by these conditions usually leads to bacterial infections. Bacteria capable of attacking fish are commonly present in almost any pond, and once day-to-day stressors weaken the fishes’ resistance, bacterial infections can often be seen in the form of sores, bruises and discoloration on the skin and fins. Bream, bass and catfish can all be affected.

Occasionally, turnovers or algal die-offs can cause oxygen levels can drop to a point where fish begin to suffocate. This phenomenon is referred to as an oxygen depletion. Once under way, oxygen depletions are easy to recognize. Partial depletions can be recognized by fish hanging at the water surface during the early morning hours or a by loss of appetite and activity in ponds where fish are fed. Lethal oxygen depletions begin with similar symptoms. Fish congregate at the pond surface, gulping. During the early minutes of the depletion, they may dive when disturbed and then return to the surface. As conditions worsen, they will ignore most disturbances and continue gulping air.

Mechanical aeration is required to raise oxygen levels once a depletion has begun. Irrigation or industrial pumps can be used to pull water from a depth of 2 to 3 feet and spray it back into the pond. Caution should always be used when employing these techniques, to avoid contaminating pond water with agricultural or industrial chemicals. Flushing with clean, aerated water will help improve water quality, but this alternative is not available for ponds that depend on runoff as a water source. Emergency aeration will be most effective in smaller ponds, but the success of any aeration practice will depend on the severity of the oxygen depletion.

There is no guaranteed approach that will eliminate springtime fish losses to disease or oxygen problems, but avoiding excessive fish population densities and high levels of fertility throughout the year will help minimize the chances of a fish kill in the spring. If pond owners don’t thin out fish through a regular management program, Mother Nature will eventually take the opportunity to do it. For tips on all aspects of pond management, click here.