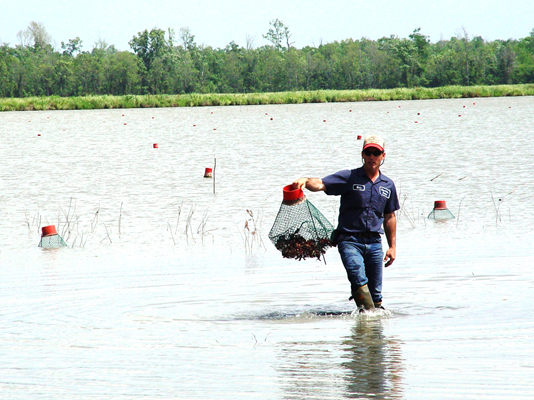 Over the last several years, crawfish farmers have been switching to a slightly different crawfish trap – one constructed of ¾-inch square mesh wire in lieu of those made from ¾-inch hexagonal (6-sided) mesh.

One study at the Rice Research Station in 2003 documented a 39% average increase in catch, from 525 to 728 pounds per acre, with ¾-inch square mesh traps compared to the old industry standard ¾-inch hexagonal mesh traps. With increased catch efficiency, the question arises, “Can square mesh traps be successfully used at a lower density than previously recommended for the less efficient hex mesh traps?” Based on research in well-managed ponds producing more than 1,000 pounds per acre, 20 to 24 hex mesh traps per acre were found to be the most efficient and economical trap density in a harvesting schedule that entails emptying traps 3 or 4 days per week.

A preliminary study was conducted in 2004 at the Rice Research Station comparing square mesh trap densities of 18 and 24 per acre. With an average annual yield of 623 pounds per acre, the higher trap density resulted in only 48.5 pounds per acre, or 8%, higher yield. Assuming an average bait cost (½ fish and ½ manufactured bait) of $24 per hundred pounds, and 1/3 pound of bait per trap over 63 days of trapping, bait cost alone for the additional 6 traps per acre would result in an increased cost of $29 per acre, or 60 cents per pound for the additional yield. Although the lower trap density in this one study did not lower yields significantly, additional studies are needed under an array of growing conditions to confirm lower trap density recommendations and to determine the most cost-efficient trap densities under different conditions.