How to Gain an Edge with Your Crawfish Buyer 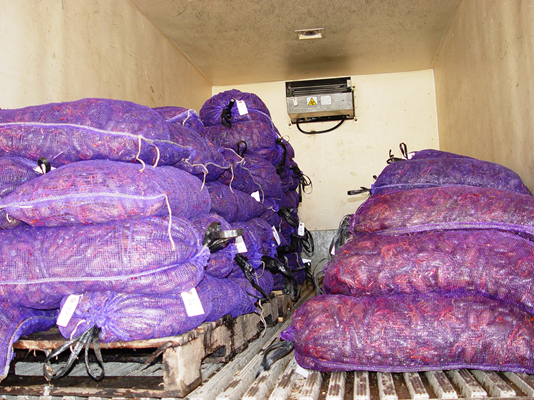 Sacks of crawfish in refrigerated coolers

Virtually all crawfish sold by farmers and fishermen are alive. A small percentage of those are processed soon thereafter, but most are sold to the final buyer as live product for the “whole boiled” market. This market necessitates that crawfish remain alive until cooked, which may require several days or longer in some cases. Crawfish are held in refrigerated coolers, either packed with ice or with the relative humidity replenished by daily wettings and/or with moisture-retaining blankets of wet burlap.

Live crawfish are typically packaged in plastic mesh sacks at about 35 pounds each. This type of packaging restricts crawfish movements and their ability to inflict damage to each other with their claws and allows rapid cooling and replenishment of moisture. But the open-mesh sacks also allow for rapid desiccation if moisture is not maintained or replenished. Crawfish in good health and held under good refrigerated conditions can be stored up to four to five days without excessive mortality.

The effective shelf life of live crawfish during refrigerated storage is a key factor for merchants, especially those who only receive shipments once or twice a week and must hold the product for several days. Profits are reduced at the restaurant or retail level when excessive mortality occurs from the time crawfish are bought until they are sold or consumed. Excessive mortality during holding can negatively affect buyer loyalty to certain farmers or distributors. Likewise, crawfish with little mortality can engender a great deal of loyalty to those sellers and may result in repeat sales when supplies are plentiful and marketing of crawfish is difficult.

Death loss during refrigerated storage can be affected not only by conditions during storage but also by the health and/or handling conditions during and after the harvest. Many crawfish fishermen harvesting large acreage tracts will often keep sacked crawfish in the boat or deposited on the pond bank for hours prior to transporting them to shelter or a cooler. While harsh exposure to sun and open air conditions is known to increase mortality during refrigerated storage, the degree to which this occurs has not been well-documented. Therefore, a study was undertaken at the LSU AgCenter’s Rice Research Station to ascertain and better document the effects on shelf life of live crawfish held under refrigerated storage when a modest amount of unnecessary exposure was experienced after harvesting.

For that study, freshly caught crawfish were directly exposed to four hours of ambient outdoor conditions from about 10 a.m. to 2 p.m. and then placed in a cooler and watered daily. For comparisons, other sacks were placed directly in the cooler within two hours of capture (about 10 a.m.). This was done on 10 occasions. Dead crawfish were counted after five days of refrigerated storage. Results are presented in the following table.

Notice that the four hours of unprotected exposure to ambient conditions after harvest greatly increased crawfish mortality over the five days of refrigerated storage, even at a cooler temperature. The death loss was greatly increased (46-78 percent) at the higher temperatures. Notice also that contrary to popular belief, a large number of dead crawfish associated with the post-harvest exposure were mature. The reason for this is unclear.

In short, this study documents the degree to which refrigerated shelf life of live crawfish can be significantly affected when sacked crawfish are left exposed to sun and wind following the harvest. When crawfish must be, or may be, held in refrigerated storage for several days before being consumed, it is advisable to get them to a cool, shaded place (preferably a cooler or on ice) as quickly as possible after capture. Healthy crawfish from a source that routinely employs this practice may generate a welcome loyalty to that producer, especially if the retailer has to hold crawfish unexpectedly in refrigerated storage longer than anticipated.

Table: This shows average mortality of crawfish after 5 days of refrigerated storage following either a non-exposed or 4-hour exposure period to unprotected outdoor conditions following the harvest. Notice the percent of increased dead when they were left exposed, and notice that mature crawfish died at a higher rate when exposed.