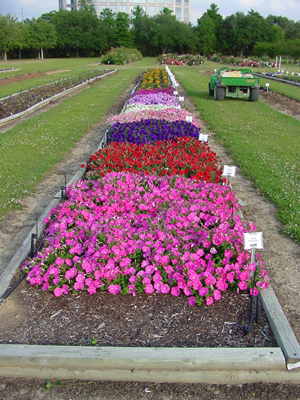 Petunias are one of the best plants for landscape performance in the spring. We can plant petunias in South in the fall (ideally September through November) and the late winter/early spring (ideally late January through early March). They can be a cool-season and warm-season bedding plant.

The popularity of petunias is increasing due to the release of a number of new varieties over the past ten years. Old petunias belong to growth-habit classes that are referred to as multiflora or grandiflora. Multiflora petunias flower more freely and seem to hold up slightly better in adverse weather conditions and heat than do grandiflora petunias. The multifloras have flowers 1.5 to 3 inches in diameter while the grandifloras are more known for being larger flowered (3 to 4 inches). These are still popular and include the Madness and other popular varieties.

The newest varieties of petunias, however, are now the most popular and are propagated by seed and are classified as spreading type plants. Low-growing, spreading plants that reach only 6 to 12 inches in height, spreading petunias can be used as a flowering ground cover, in full sun, as well as trailing in hanging baskets. Flowers form along the entire length of each stem and are produced prolifically all season without the stems being trimmed back. The flowers, 2 to 3 inches in diameter, are available in numerous colors. Spreading petunias stand up particularly well to heat and humidity. We still cannot rely on them from June through August in South . Popular series include the Wave types, Explorer, Plush, Ramblin and Supercascade.

Petunias are related to tomatoes, peppers and tobacco. They have light fragrance to the flowers. Most folks say that new petunia varieties do not have the fragrance like old petunia varieties. Still, a mass planting of petunias will yield some nice fragrance as you walk by.

The most popular petunia currently is the Wave series. These petunias are available in several colors – purple, pink, rose, misty lilac, lavender and blue. Pink, rose, misty lilac and lavender are the best of these six, although purple was named an All-America Selection winner in 1996. They grow about 24 to 30 inches wide and reach heights of 8 to 10 inches.

Cousins of the Wave petunias are the Easy Wave and Tidal Wave series. The Easy Wave petunias have a few more colors available than the Wave group. Options are pink, blue, rosy dawn, salmon, white, red, shell pink and coral reef. They fit better into containers and have a better growth habit for hanging baskets.

The Tidal Waves are just as the name implies – the largest of these type petunias. Tidal Wave petunias come in cherry, pink, silver and purple and can be 3 feet tall and 3 feet wide. These petunias are referred to as “hedgiflora” types.

Petunias planted in the fall will outperform petunias planted in the spring, but you can still get some nice petunias at garden centers in South through March. Plants need full sun and a well-drained landscape bed. They prefer slightly acid soil conditions. Fertilize at planting, and irrigate to aid in establishment and when rainfall is lacking for a week to ten days. Normally, petunias have peak flowering in April through early May. Usually, the heat of June and July leads to their downfall.

LSU AgCenter research at Burden Center in Baton Rouge and the the Hammond Research Station in Hammond has shown the Wave, Easy Wave, and Tidal Wave petunias to be excellent varieties for South Louisiana. The newest of these to be evaluated are the Shock Wave petunias – new for 2008. They are the smallest growing of the Wave type petunias and have the smallest flowers. We have also found the new Plush series to be a good performer since its release last year.