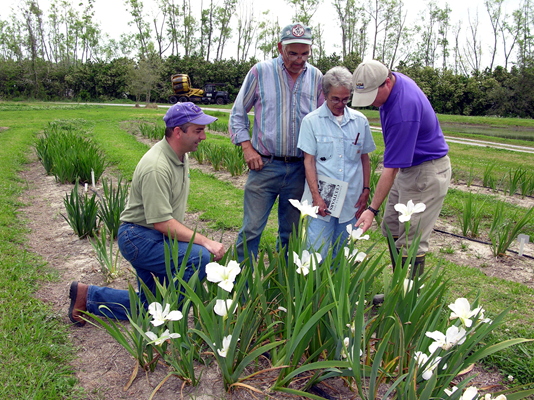 Bobby Fletcher, the LSU AgCenter’s area horticulture agent in Terrebonne, St. Mary and Lafourche parishes, and Dr. Ron Strahan, an AgCenter assistant professor of agronomy, have been working directly with a Louisiana iris producer in Chacahoula on the study.

Strahan, whose job is to conduct weed control research and extension programs in turfgrass and ornamentals for the LSU AgCenter, said this is the only weed control study in the state concentrating on field production of Louisiana iris, and its purpose is to increase yields and reduce weed competition.

He said the study is being conducted because despite the growing popularity of Louisiana iris in landscapes, producers really don’t have a program for controlling weeds.

"Our big problem here is trying to determine a program that would allow Louisiana iris growers to produce their crop with good weed control," Strahan said.

The LSU AgCenter faculty members believe they have data to show growers how to produce irises without a lot of labor for weed control and at a minimum cost.

"We’ve found that Gallery is a good pre-emergence broadleaf herbicide that appears to give us very little injury to the plant and excellent broadleaf weed control," Strahan said.

He said the findings show that the tank mixing of this herbicide with pre-emergence grass killing herbicides like Pendulum or Pennant provides excellent weed control during the winter.

The LSU AgCenter agronomist also said the best results were found after two applications of the mixture.

For the iris growers, winter is when they really want good weed control, because that’s the iris growing season. Weed control is not as important for irises in the summer, because the plants are not growing at that time.

Strahan said the cost of labor to control weeds on the 3-acre operation where the tests are being conducted could easily run into the thousands of dollars per acre, but with the herbicide mixture, the cost is brought to below $200 per acre.

Russella (Rusty) Ramp McSparrin, co-owner of the chacahoula operation, has been an iris grower since 1961 and in the business of producing irises for sale since 1983. She and her husband Bud McSparrin say this research is helpful to them because of the size of their operation.

Rusty McSparrin explained that September, October and November are the best months to market Louisiana irises. She says she not only markets them in Louisiana but has shipped irises as far away as Canada and South Africa.

Fletcher said this research plot will be showcased to a national audience as part of a tour when the Society for Louisiana Iris Growers holds its national meeting in Lafayette during the first week of April.

"The group will take tours of several iris gardens in South Louisiana," Fletcher said. Included in those stops will be the Terrebonne Tourism Center Building in Gray, where the La-Terre Chapter of the Louisiana Master Gardeners, a group of specially trained LSU AgCenter volunteers, have established several large Louisiana Iris beds, Fletcher added.

After those tours, the group will stop by the McSparrin farm – where they will have lunch and hear about the findings of the weed control research being conducted by Fletcher and Strahan. Fletcher said they hope all the irises will be in bloom at that time.

Rusty’s brother-in-law, Dr. Arthur Ostheimer… told me about his sister-in-law’s Louisiana iris farm, and it took off from there," Fletcher explained.

The McSparrins were having problems with weed control on the Louisiana iris farm and thought the LSU AgCenter could help solve this problem, he said.