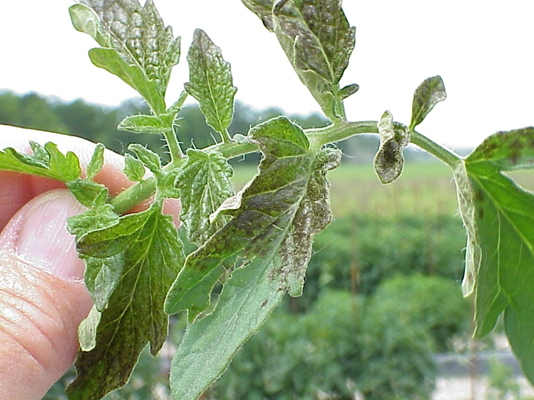 Tomato spotted wilt virus (TSWV) is causing losses to many tomato growers. It appears that we will continue to have a lot of problems most years unless resistant cultivars are developed and adopted. Symptoms of the disease typically include cupping and rolling of the upper leaves, which usually turn purple/brown along the veins. An internal spotting or browning of leaf tissue (spotted wilt) occurs frequently but is not always evident. If the fruit are set before infection, they may be distorted or develop blotchy orange ring spots as they ripen.

The virus is transmitted by insects called thrips. It is not easily mechanically transmitted by rubbing. Juvenile thrips acquire the virus from infected weed hosts. They disperse it after becoming winged adults that feed on host tomato and other target plants. Consequently, this disease is more of a problem in spring crops and in certain favorable years.

Weed hosts identified as potential virus carriers include spiny amaranthus, wild lettuce (Lactuca sp.), pasture buttercup (Ranunculus sp.), Solanum sp., and sowthistle (Sonchus sp.). These are all abundant in our state when tomatoes are in the field.

Surveys show higher incidence of the virus in cool springs in parishes that border rivers. This is probably because the weeds grow best in wet or moderately wet locations.

Spotted wilt is difficult to control. Unfortunately there is nothing to do but pull the plant once the plant becomes infected. It is also heartbreaking that TSWV shows up after most of the work on the tomato crop, such as tying, pruning and staking, has been completed. Spray early for thrips. Recognize the symptoms and remove problem plants and weed hosts from around the fields.

The LSU AgCenter has been working with TSWV for the last several years. The easiest way to prevent this virus is to grow TSWV-resistant cultivars. Some of the TSWV tomato cultivars released are not very tasty tomatoes. They are commercial cultivars that produce a lot of large, very firm and crack-resistant fruit; however, the seed companies are making progress on better-quality TSWV-resistant tomato cultivars.