Fall Is for Football... and Brown Patch! 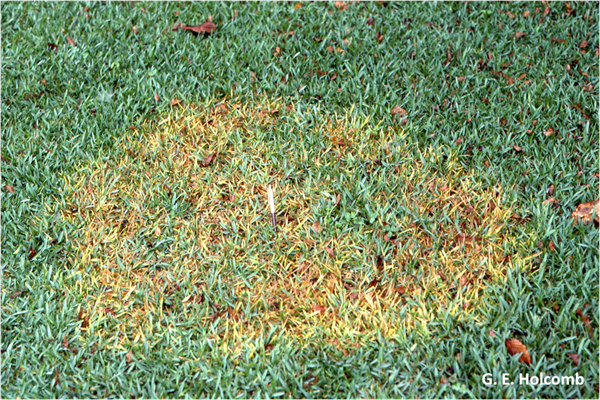 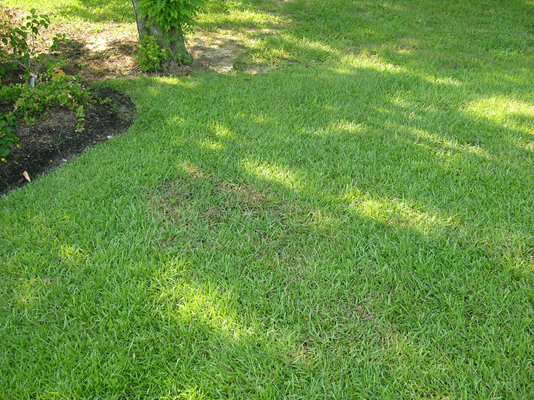 Football season is here (Geaux Tigers!), and fall is just around the corner. With it will come the cooler temperatures that slow the growth of our warm-season Southern turfgrasses and prepare them to go dormant for the winter. This also happens to be the combination of factors that favor the development of brown patch (fall weather, not football), the most common disease of turfgrasses in Louisiana lawns. If you have had problems with brown patch before, you will most likely have them again as temperatures become favorable for disease development, particularly with the frequent rains we have been getting. So now is the time to consider applying a fungicide to get ahead of this disease.

Brown patch (or large patch as the disease is now called on warm-season turfgrasses) is caused by the fungus Rhizoctonia solani. Although this disease is especially prevalent on St. Augustine, it also occurs on all other warm-season turfgrasses, such as bermuda, centipede and zoysia. As the name suggests, the disease is characterized by the development of somewhat circular or irregularly shaped patches of diseased turf that can become quite large if not treated. The brown patch fungus does not usually kill the grass, but it will attack the base of the leaf sheaths causing them to rot. This results in thinned areas of turf that are rapidly invaded by weeds. Brown patch generally develops first in areas surrounded by trees, shrubs and fences that reduce air movement and delay the drying of the grass following rain or irrigation, and it develops most rapidly when nighttime temperatures range from 60-75°F and daytime temperatures do not exceed 85-90°F.

Fall applications of fungicides can limit damage to the turf until it goes completely dormant and conditions become unfavorable for disease development. The length of time it takes to transition from summer to winter, and the frequency of rain, will determine how many fungicide applications are necessary. We generally recommend at least two fungicide applications when disease is present, the first being in mid- to late September and the second in mid- to late October. When fungicides are being applied to prevent disease in areas where it has not already become established, the use of granular formulations of fungicides is quite appropriate. Once the fungicide has been applied, it must be watered to activate it. However, if fungicides are being applied to areas where brown patch is active, it is better to use sprayable formulations of the fungicides, as these will give better coverage. In this case, the material should be allowed to dry before additional water is applied.

Many of the fungicides available for use by homeowners are systemic fungicides, which have the advantage that they are taken up by the plant and protect from the inside, which is important particularly during periods of frequent rains. These include those fungicides with the active ingredients myclobutanil (Spectracide Immunox Lawn Disease Control, etc.), propiconazole (Ortho Lawn Disease Control, etc.), thiophanate-methyl (Scotts Lawn Fungus Control, etc.) and triadimefon (Bayer Advanced Fungus Control for Lawns, etc.), all of which do a good job of controlling brown patch. When used according to the label directions and allowed to dry properly, these materials are generally quite safe for use on residential lawns.