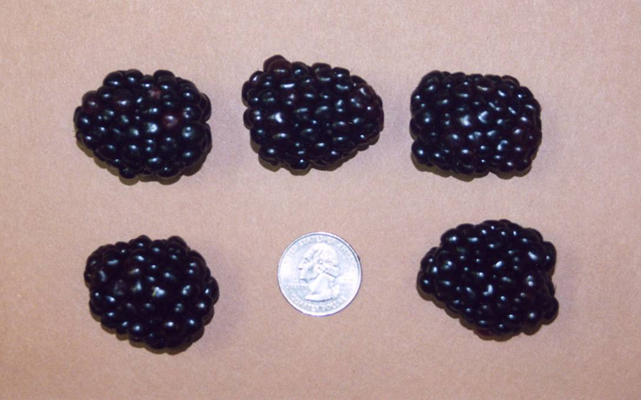 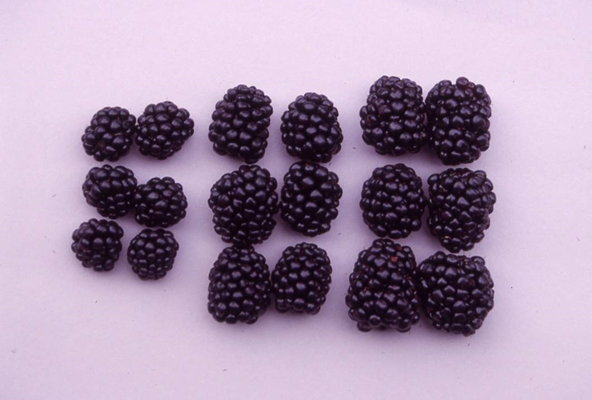 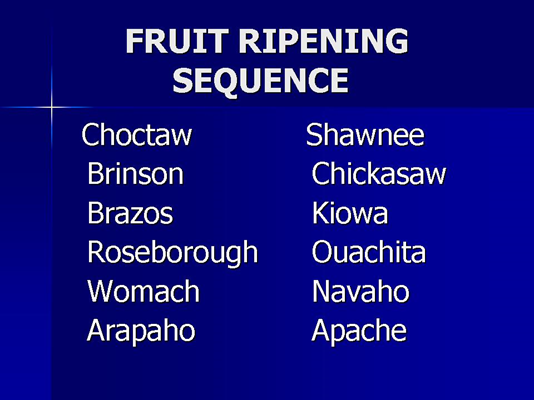 Blackberries and dewberries are native to Louisiana, and many commercial varieties are well adapted to growing conditions of the state. They can be profitable commercial fruit crops in Louisiana. Blackberries can also be grown in the home garden with little or no pesticide usage.

Blackberries have their greatest commercial potential as small plantings designed specifically for the “pick your own” (PYO) market. With a decrease in the availability of harvest labor, fresh blackberries have become scarce in local markets. To satisfy this demand for fresh blackberries, the PYO concept was developed. The most successful operations use erect blackberry varieties that produce good quality fruit that ripens over an extended period. The development by the University of Arkansas of erect thornless varieties that also have good resistance to rosette disease has also increased interest in growing blackberries commercially.

The erect type of blackberry is recommended where the grower wishes to avoid trellising. Trailing blackberries are recommended only for home use.

Brazos is an erect blackberry released by the Texas Agricultural Experiment Station in 1959. It is early and has very large, fair quality fruit that is maintained over the entire fruiting season. The fruit is slightly sour and rather seedy. It is productive and is well adapted to fresh market outlets. In Louisiana it is very susceptible to rosette (double blossom disease) but resistant to anthracnose. The fruit is not extremely firm but holds its shape well when processed. Brazos has generally been replaced by the University of Arkansas Indian varieties.

Cheyenne is a 1977 University of Arkansas release suitable for commercial or home use and especially adapted for PYO plantings. Fruit is sweet, large and has a slight raspberry flavor. It ripens mid season and is adapted to the entire state.

Brison is a large, erect, high-yielding blackberry. A 1977 Texas A&M release, its fruit is firmer and sweeter than Brazos. It’s best suited to south Louisiana. It ripens with Brazos (mid May).

Rosborough is a high-yielding 1977 Texas A&M release. The fruit is firmer with smaller seeds than Brazos. Canes are very vigorous and thorny. It is adapted to the entire state. Rosborough is very susceptible to rosette disease.

Womack produces medium-size fruit and high yields. A 1977 Texas A&M release, it is best suited to north and central Louisiana. Its fruit has smaller seeds and is sweeter than Brazos.

Shawnee is a consistent high yielder with medium large fruit. This University of Arkansas 1983 release ripens about one week later than Cheyenne. A peak in production during the harvest season is not apparent. Shawnee produces heavily for several consecutive weeks, making it an excellent PYO variety. The soft berries do not store or ship well. Shawnee is very susceptible to double blossom disease.

Choctaw is a 1989 release for the University of Arkansas that has erect canes and medium-size fruit. It is a very early variety with small seeds. The fruit is soft, with handling and storage qualities similar to Shawnee. Choctaw has a chill hour requirement of 300 – 400 hours and is susceptible to late freezes. It is susceptible to rosette disease. Choctaw is recommended for trial for early blackberries.

Kiowa is a 1996 release from the University of Arkansas with erect canes and very large fruit. The fruit is the largest of the Arkansas varieties, and the storage and handling qualities are good. Kiowa blooms just after Choctaw and Shawnee although its chill hour requirements are probably near 200 hours. It is susceptible to rosette disease. Kiowa is recommended for commercial and home use throughout Louisiana.

Chickasaw is a 1998 release from the University of Arkansas with erect canes and very large fruit ripening near Shawnee. Storage and handling qualities of the fruit are better than Shawnee. Plants are high yielding. Chickasaw is susceptible to Rosette. Chickasaw is recommended on a trial basis for commercial and home production.

Arapaho is the earliest ripening erect thornless variety. Fruit is medium size. Yields are about 60 percent of those of Shawnee. Fruit begins ripening a few days ahead of Shawnee. Arapaho is a 1993 release from the University of Arkansas that appears to be resistant to orange rust and rosette diseases. Arapaho has chilling requirements of 400 – 500 hours, therefore it should do well in most areas of Louisiana except possibly some coastal areas. Arapaho is recommended for commercial and home use.

Navaho is an erect blackberry with thornless canes. It has medium-size fruit with high sugar content and excellent flavor. It has firm berries with perhaps the best post-harvest shelf life. Yields are 60 percent to 75 percent of those of Shawnee. Navaho is tolerant of rosette but susceptible to orange rust. It is a 1989 release from the University of Arkansas. Navaho has an extended ripening season, beginning one week after Shawnee and continuing two weeks later than the last Shawnee harvest. Navaho has a chill hour requirement of 800 - 900 hours and is recommended for commercial and home use in North Louisiana.

Apache is a 1999 erect thornless blackberry release from the University of Arkansas. It has the largest fruit and highest yield of the Arkansas thornless blackberries. Fruit ripening is approximately five days after Navaho. Plants appear to be resistant to rosette disease and orange rust. White druplets or sunburn have sometimes been noted as a problem. Apache is believed to have chill hour requirements similar to Navaho. Apache is recommended for trial in North Louisiana.

Ouachita is a 2003 erect thornless blackberry release from the University of Arkansas. The fruit is large and has good storage and handeling qualities. Fruit ripens with Kiowa and extends for about five weeks. Research trials indicate that yields are comparable to Apache. Ouachita is resistant to rosette disease. Ouachita chill hour requirements are probably similar to Arapaho and it is recommended for trial in Louisiana.

Boysenberry is a large, tart, soft, reddish, highly flavored berry. Widely grown in the South, it is late maturing. Thornless selections of this variety are available.

Youngberry is a very large, mid season, wine-colored, sweet berry of Louisiana origin. Plants are vigorous. It is susceptible to rosette disease.

The University of Arkansas released two primocane varieties in 2004. These are Prime-Jim and Prime-Jane. These varieties have produced good yields on primocanes in Oregon, but yields on primocanes have been very low in south Arkansas. The problem appears to be that temperatures above 85 degrees tend to severely reduce fruit set, size and quality on primocanes. Fruit on floricanes of these varieties have been similar to fruit yield on floricanes of Apache and Ouachita. Prime-Jim and Prime-Jane are thorny erect blackberries. They are not recommended for Louisiana. They should be grown only on limited trial basis. Hopefully, additional primocane varieties will be developed that are better adapted to Louisiana.