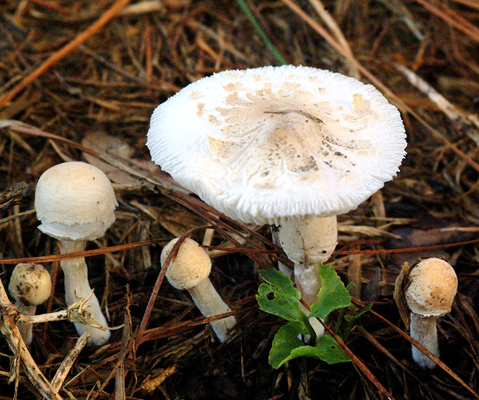 Mushrooms, which often pop up in lawns following heavy rainfall, can cause vomiting, diarrhea and even liver failure in dogs.

Mushrooms in lawns and moldy foods can be health hazards for your dogs, according to LSU AgCenter veterinarian Dr. Steve Nicholson.

"Fungi may be growing in your yard as mushrooms and in the ‘fridge’ as mold on foods," Nicholson says, adding, "It is not unusual for veterinarians to treat sick dogs that have a history of eating these things."

The LSU AgCenter veterinarian says the mushrooms that are popping up in lawns now following recent heavy rainfall may prove attractive to some dogs. Young dogs, in particular, are prone to chew and eat these things, Nicholson says.

"The clinical signs of illness depend on the species of mushroom eaten," Nicholson says. "Fortunately, most yard mushrooms don’t cause more than a bout of vomiting and diarrhea."

In those cases, the veterinarian says a clue on the cause could be that portions of the offending mushroom may be present in vomited material.

In more severe cases, although rarely, stomach upset and diarrhea are followed by onset of liver failure – an indication that the mushroom was a toxic species of amanita or a galerina, he says.

The LSU AgCenter veterinarian also says abnormal behavior may be associated with ingestion with certain fungi, such as mushrooms.

In addition to those problems with mushrooms, moldy foods also can be a problem if pets are allowed to eat them, according to Nicholson, who says veterinarians see cases where dogs have eaten mold-damaged foods like cream cheese, rice or macaroni.

"I probably get a call per month regarding dogs that are exhibiting severe tremors and seizures caused by Penicillium mold toxins," he says. "Sometimes it is the ‘garbage can raider,’ and other times the food was fed to the animal.

"These are true emergencies and require skilled care to control seizures and detoxify the dog," he adds.

In either case, the veterinarian says it’s much better to prevent the problems than to treat them.

"In the case of mushrooms and moldy foods, an ounce of prevention is certainly worth more than a pound of cure," he says, stressing, "Put them in the garbage can where they will be out of reach."