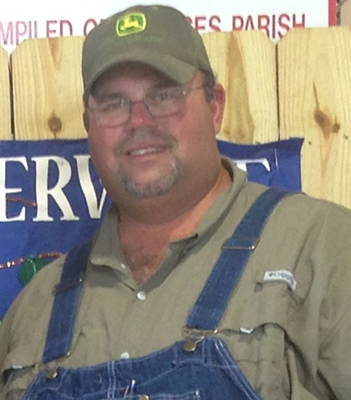 Cecil Ramagos Jr. began his 4-H career in 1970 at the age of nine and grew up on a sugarcane farm helping his father raise 4-H show pigs. He has served as a 4-H volunteer leader for over 25 years and was instrumental in establishing the Iberville Livestock Booster Club, a group of volunteers who mentor livestock exhibitors and implement fundraisers to support the parish program. He has served as president and fundraising chairman since its inception in 1995.

Cecil has been a project leader for all livestock projects and has generously sponsored animals, mentored exhibitors, housed animals, supplied feed and transported animals. He and his father were instrumental in building the Iberville livestock show barn on the old Acadian Festival fairgrounds. He has served as a member of the Acadiana District Livestock Board for 10 years, securing pens and shavings for the parish and district shows.

In addition to his service to the livestock program, Cecil has created and demonstrated agricultural exhibits at Achievement Day for 15 years, chaperoned trips and trained 4-H University contestants in public speaking and tractor driving.

Cecil is a Louisiana Master Farmer and serves as president of Iberville Farm Bureau, vice president of the Louisiana Farm Bureau Board for District 11 and vice chairman of the Farm Bureau Sugar Advisory Committee. As a 4-H volunteer, it has been estimated that he has contributed about 1,200 hours of service to the 4-H program and impacted countless young people with his optimism, vision, leadership skills and dedication to positive youth development.