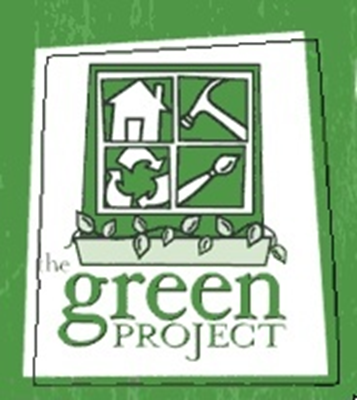 The idea for The Green Project came about through a conversation Linda Stone (The Green Project founder) and Angie Green (now Executive Director) had with New Orleans city officials 15 years ago. Stone and Green had gone to the city with questions concerning the recycling of household hazardous waste - where and how to do it. In brainstorming, the women came up with the idea of providing a place to recycle and re-sell paint. Stone formed a nonprofit and in 1996, The Green Project opened its doors in an area of New Orleans called Mid-City.

Within the first year of opening, the original concept started expanding. The Green Project received a grant from the Environmental Protection Agency (EPA) to start recycling architectural materials. The small nonprofit organization grew very quickly from there. Today some of their biggest customers are contractors and builders, especially the smaller businesses, who can find anything from historic Spanish clay roof tiles to interior molding. The Green Project is open to everyone, though, and any homeowner can come to The Green Project warehouse and buy reclaimed hardware and lumber, interior and exterior doors, toilets, sinks, bathtubs, and many other materials and fixtures. Materials are collected through donations and the inventory changes daily.

In 2003, The Green Project found they no longer had the space at their Mid-City location to house their growing inventory and knew they needed to move. They bought the warehouse at 2831 Marais Street that is the site of their current location.

After Hurricane Katrina hit the Gulf Coast in 2005, the need for an organization like The Green Project was exponentially increased. People needed a place to both recycle their own building materials and find other materials at affordable prices.

The Green Project warehouse itself had 1’-6” of water in the building following the storm. The building also sustained much roof damage, including the loss of half of their solar panels. The half that were saved are able to provide about 20-25% of The Green Project’s energy use.

By this time, former volunteer and Green Project shopper Angie Green had become Executive Director. She had evacuated for the storm and remained gone only two weeks. She returned as soon as she could. Green and others who could get back to the city, opened the doors of The Green Project in September of 2005 and let people just take whatever they needed. Starting fresh, The Green Project officially re-opened after Katrina in January of 2006.

The Green Project sells their materials to the public for 25-50% below retail, sometimes more. All donated and collected items are inspected and priced according to condition, quality, and quantity. Green reports that 65% of their income is derived from sales of the reclaimed materials. Grants and donations provide the remaining 35%.

But customers come to The Green Project for more reasons then just price. “Fifty percent of the customers who shop here shop for prices,” Green estimates. “The other 50% like to treasure hunt. You can always find something neat.”

Green herself shopped at The Green Project and volunteered before joining the organization as a paid employee six years ago. Volunteers are the backbone of the nonprofit. In the first two years of operation, The Green Project survived on volunteer labor alone. Today they have 15 paid employees, 11 of whom are full time. Everyone else is a volunteer.

Approximately 800-1,000 volunteers work at The Green Project each year. “We would not be here without them,” Green stresses. “They are incredibly invaluable.” Volunteers come from all over the world. Some are school groups, some come from large corporations like Shell, and others form a small core of regular volunteers.

The Green Project started out as just a paint recycling and resale center and while they have greatly expanded their scope, this portion of the program is still going strong. They collect 25,000 gallons of paint from Orleans and neighboring parishes each year. Twelve thousand gallons are recycled and sold and 3,000 gallons are donated to various nonprofits and schools. The remaining paint is unusable and disposed of at an EPA-approved facility.

Besides selling reclaimed materials and recycling paint, The Green Project offers other services to the public. They have a recycling center where anyone can drop off paper and newspapers, cardboard, aluminum cans, and household electronic waste, though they cannot take glass or plastic at this time.

The Green Project warehouse on Marais Street sits conveniently between the architectural salvage shop of the Preservation Resource Center (PRC) and a Habitat for Humanity ReStore. The three-in-a-row create a sort of “reduce, reuse, recycle” enclave for one-stop building material shopping. Green thinks it’s great. Each organization has a different focus and Green sees that each of them is providing more opportunities for creating a sustainable city. To Green it doesn’t matter which nonprofit the public buys from. “The way I see it, its someone buying a re-used material and that’s keeping materials out of the landfill.”

While providing an invaluable service, The Green Project’s real focus is the education, promotion, and encouragement of sustainable actions. As part of this effort, The Green Project hosts community events that show the public creative reuse applications for garbage and salvaged material. Events in the garden and the green room promote art created with found objects. In addition, the annual “Worn Again” fashion show is a community favorite that grows each year.

The Green Project warehouse is open daily from 9 a.m. to 5 p.m. and everyone is welcome to come browse, buy or donate. As with most donations, tax benefits are available to those donating materials in reusable condition to the Project. The Green Project is located at 2831 Marais Street in New Orleans. They can be contacted by calling 504-945-0240 or by visiting www.TheGreenProject.org .