The History of the Raised-floor House in Louisiana 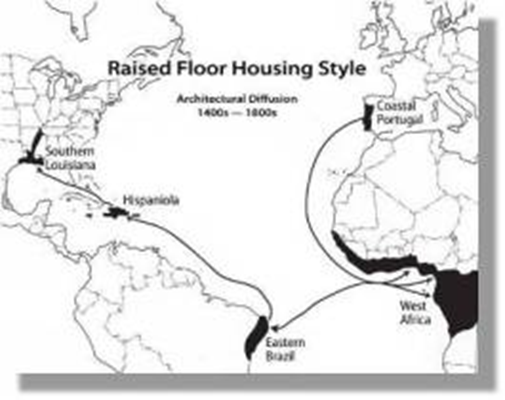 Map of architectectural diffusion of the raised-floor housing style. (adapted from Edwards 2002, 78) 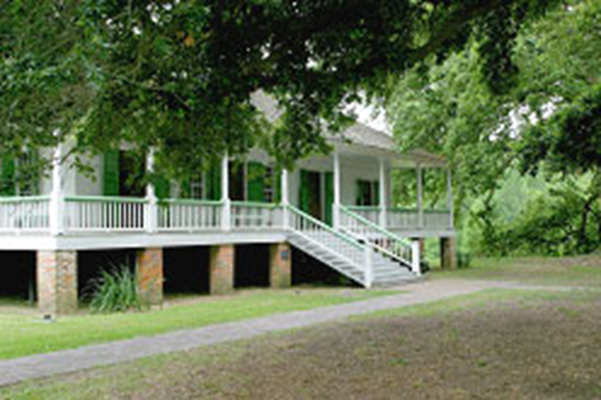 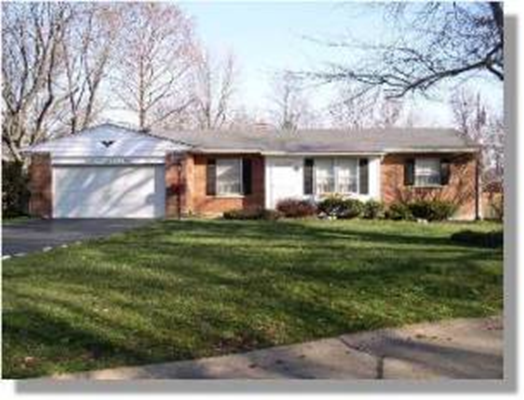 Examples of vernacular architecture include buildings such as tepees of Native Americans or the beehive homes of South Africa. Vernacular buildings are also sometimes called "folk buildings." Vernacular architecture can tell us a lot about the social norms and religious beliefs of a culture, but it can also tell us how people lived and built in ways that accommodated the climate and natural hazards of an ecological zone before the technological advances of today.

So, from what vernacular tradition did the raised-house forms of Louisiana come? In a study of cultural and architectural diffusion, anthropologists have come to believe that the raised house comes to us from Portugal by way of West Africa, Brazil and the West Indies, specifically Haiti.

In the late 1400s, Portuguese from coastal Portugal made their way down to the Sudan savannah and, then, eventually down to Ghana, where they established the first slave-trading posts. In time, the Dutch, French, English and Portuguese all had fortified trading posts from Ghana down to through the Ivory Coast – all of which sit in the delta of the Niger River.

The intermingling of the Dutch, French, English, Portuguese and different African tribes led to a syncretistic form of EuroAfrican Creole architecture along the coast of Africa. This EuroAfrican Creole style is the product of the melding and fusion of the beliefs and practices of the different ethnicities. The word “Creole” derives from 15th century Portuguese. Today, the word “Creole,” when used in reference to vernacular architecture, refers to “any architectural tradition genetically descended from a synthesized tropical form.”

In the 1530s, this EuroAfrican style was again transported, mainly by the Portuguese and the slaves they traded, to another hot, coastal environment -- that of Brazil. Here the Portuguese set up sugarcane plantations. Eventually, some of the Portuguese slave traders and plantation owners moved on to Hispaniola, the Haiti and Dominican Republic of today.

In following the route of diffusion of the raised-house style, it is readily apparent that the style was transported from one similar clime to the next. Houses were raised in order to allow air circulation through as well as to protect against potential flood damage. While there are many other architectural features that were developed in response to the local climate and culture and appear in the houses discussed below, this article concentrates on the origins of the elevation of the house in Louisiana.

Both the shotgun house and the raised plantation house styles are believed to have been brought from Haiti in the early 19th century. Revolution in Saint Domingue and the invention of a new method to crystallize sugar resulted in a huge influx of Caribbean immigrants to Louisiana during 1791 to 1808. These Caribbean settlers built raised plantation houses in the Creole style along the rivers and bayous of Louisiana.

Shotgun houses began appearing in New Orleans during the massive immigration of free men of color from Hispaniola in 1809. The houses they built in New Orleans are so similar to those in Haiti that there can be no doubt as to the provenance of shotgun houses.

The third significant style of raised-floor architecture in Louisiana is the Acadian, which is a style that combines the Norman roof construction of the French in Nova Scotia with the Creole style of Louisiana. In 1755, large numbers of Acadian peasants living in Nova Scotia were sent into exile in Europe and the American colonies. Eventually, some of this exiled population started making its way into Louisiana. Former cattle ranchers, farmers, hunters and trappers, the Acadians settled along the bayous and swamps and also the prairies of southwestern Louisiana. Here they came in contact with the early Caribbean immigrants.

After initially constructing simple shelters with palmetto thatch, the Acadians began building more permanent homes, using the styles and practices of their former Canadian homeland. By the 1790s, the Acadians learned that houses built for cold winters were unsuitable for their new hot, humid, wet climate in which termites flourished. It was then that the Acadians (referred to as Cajuns) adopted the more environmentally appropriate raised-floor house of the local Creole population. However, they did retain one main element of their heritage – the steeply pitched, gabled roof.

This roof worked well in a snowy climate, but the steep pitch and high ridge allowed enough head room for living quarters in the attic, specifically for the young men’s sleeping rooms. The same roof in Louisiana worked just as well for rain but created an attic too hot for living. Eventually doors and windows would be added at the gable ends for cross ventilation.

Relations between the Cajuns and Creoles were acrimonious at the time, and retaining the steeply pitched roof of their former homeland not only provided a tie to their former heritage but also created a differentiation between the gabled Cajun cottage and the hipped-roof Creole house.

These housing types remained popular through the early part of the twentieth century in Louisiana, although many were decorated throughout the years in the attempt to follow the latest housing trends. But there was no need to change the elevation or other climate-responsive features because they worked. So what changed?

The first ranch house is credited to Clifford May in 1931 San Diego, although architectural precedents can be found in Spanish colonial architecture of Southern California. One of its chief architectural features was that the house was built directly on a concrete slab. This allowed the homeowner to move efficiently in and out of the house and promoted outdoor living and entertaining -- an attribute that would come to be more important in the future. Not only was the concrete slab more economical to build, it was considered termite resistant and accelerated the construction schedule.

The slab-on-grade ranch house really became popular in the building boom of post-World War II America. Thirteen million people returned from active service and needed homes to start life anew. The housing shortage of the depression added to the number of individuals and families who needed homes. With the economy improving and the mortgage subsidies being offered to returning G.I.s (federally insured 30-year mortgages with no down payment and low interest rates – Servicemen’s Readjustment Act or G.I. Bill), a vast number of people in the United States were looking to own a home for the first time in their lives.

The prevalence and affordability of the automobile ensured that house location was no longer an issue. Looking to capitalize on all these factors, homebuilders began to build suburbia in the more rural areas surrounding cities. Builders found they could build hundreds of identical ranch houses to fill these new neighborhoods and thereby greatly expand their business. The slab-on-grade home offered builders the opportunity to build houses more quickly and to begin to offer the attached garage. These homes afforded the new homeowner the convenience of having everything on one level.

As these neighborhoods developed, they began to create a culture unto themselves. The patio became an important part of suburban life as entertaining and outdoor living moved from the front porch to the back yard, an amenity allowed because of the form of the ranch house.

While the ranch started as a regional housing type, it quickly gained popularity throughout the country. A new crop of young homebuyers was attracted to the more modern house form and the lifestyle it represented.

There is probably one overriding reason that the slab-on-grade house became widespread in the South and profoundly changed the architecture of homes there. While air conditioning made its debut in the late 1800s, it was not until the post-WWII economic boom that it became more affordable. This affordability eliminated the need to raise houses in the South, along with front porches, wide eaves and high ceilings. With the elimination of these features, the more economical slab-on-grade house became the chosen style for both builders and homeowners alike.

No longer were issues such as landscaping and siting necessary to ensure indoor temperatures remained comfortable. In fact, consideration of environmental factors became irrelevant. Air conditioners (A/C) created the opportunity to build the slab-on-grade ranch house anywhere, a housing style that without A/C would be completely inadequate for the hot, humid climate of Louisiana. The relationships between man and nature and building and environment were forever changed.

There is a lot to be learned studying and imitating the vernacular architecture of our area. We’ve lost a lot of the ecological awareness that influenced the way we had built for almost 200 years. We can see by the recent storms that a lot of the ways we are building now do not work for our area. In turning our backs on nature, we forgot why we built the raised-floor home. And in doing so, we made our cities more vulnerable. It is worth looking to the past to gain insight into building styles and techniques that may be better suited to our local conditions?

We are finding today that the attributes we thought made the ranch house superior do not necessarily do so. We thought concrete slabs prevented termite infestation. However, the slab gives a protective buffer of only 8 inches, and all slabs crack, providing openings for the termites.

Slab-on-grade architecture may be more economical to build, as was thought earlier, but only if the grade does not need to be raised for flood protection. Other assumptions such as superior energy efficiency, the promotion of outdoor living and increased accessibility are also not necessarily true. The ranch house has proven not to have any significant advantage above the raised floor house in our area.

For the first time since the 1940s, we are starting to look at our environment again and ask ourselves how we can build in a way that respects the moods and forces of nature. With more attention being paid to the climate and hazards of our area, we have a chance to revisit a house style that was specifically designed for this climate and geographic area.