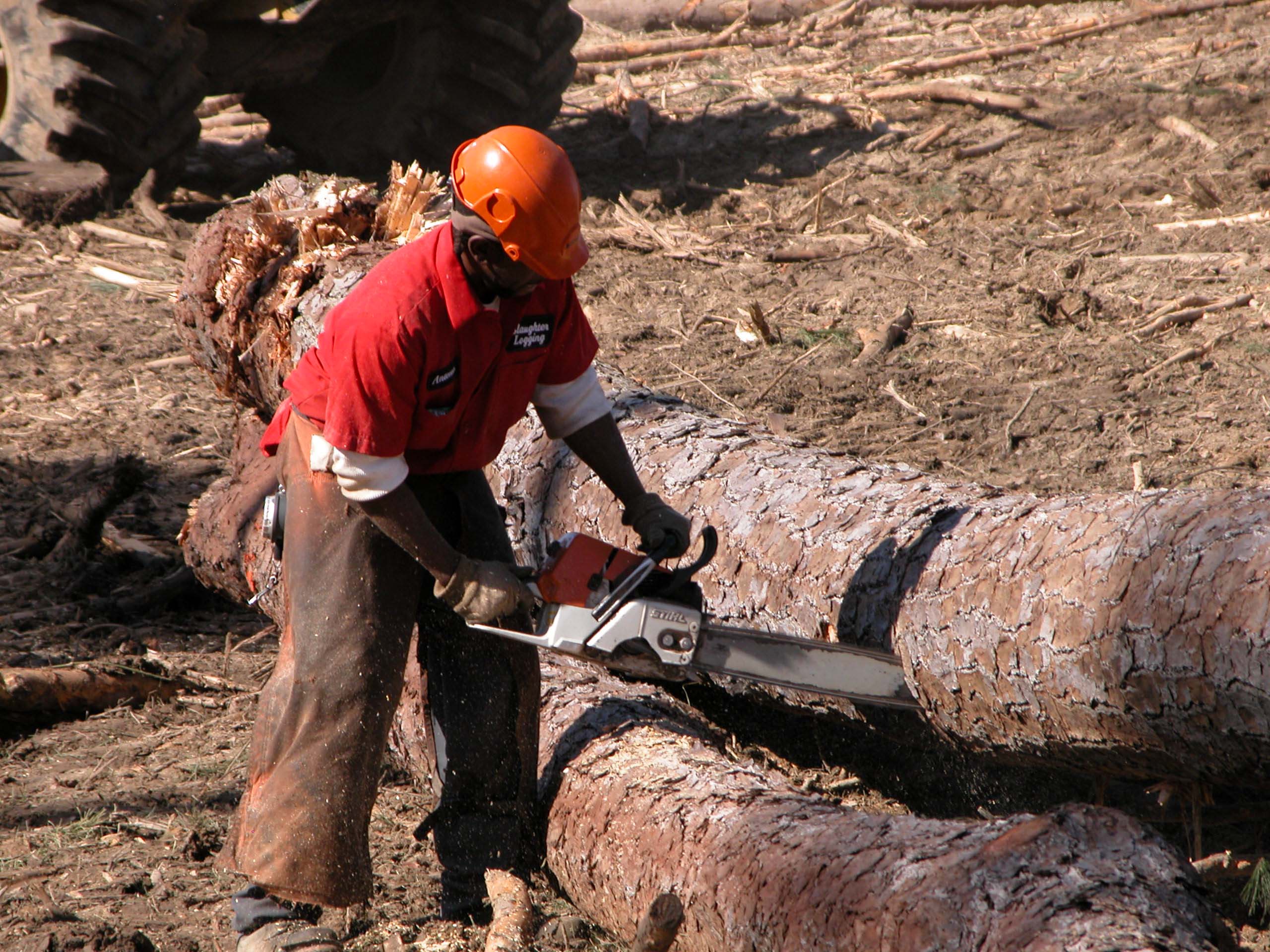 Hurricanes put a lot of limbs and whole trees on the ground and Louisianians readily jump to the cleanup effort.

An LSU AgCenter forest safety specialist says safety should be a major consideration during those efforts – particularly when it comes to use of a chainsaw.

It’s been said that more people are injured during storm cleanup than by a storm itself, according to Dr. Niels de Hoop, an associate professor in the LSU AgCenter’s Louisiana Forest Products Development Center.

De Hoop says chainsaw cuts are particularly dangerous because they can easily cause severe bleeding.

"Unlike the clean cut of a knife, chainsaws remove body tissue as they cut," he says. "This makes injury repair and recovery difficult."

He also warns that chainsaws may be loud enough to cause permanent hearing loss. And overhead hazards may lurk if you’re felling trees.

Chainsaw safety starts when you purchase the saw.

"Don’t just purchase a saw by itself," de Hoop says. "Purchase personal protective equipment (PPE in safety jargon) along with it."

Available from most dealers who sell chainsaws, this safety equipment doesn’t prevent accidents, but it may keep an accident from being as bad as it could have been, the forest safety specialist says.

The U.S. Occupational Safety and Health Administration requires the following personal protection equipment to be used by any employee who uses a chainsaw: hard hat (if an overhead hazard exists, such as when cutting a tree), eye protection, hearing protection, gloves, leg protection and foot protection.

"Homeowners using chainsaws should do the same," de Hoop says.

If there are trees and treetops overhead, the need for a hardhat is obvious, de Hoop says. In cleanup cases, electric lines commonly are nearby, so one should use a plastic hardhat rather than a metal one.

Since the most commonly injured body part is a leg, the next most important PPE is leg protection, commonly in the form of saw chaps. These chaps have multiple layers of Kevlar or ballistic nylon – similar to bullet-proof vests. When it’s drawn into the saw, the chain stops running.

"I personally know two occasional chainsaw users who prevented a severe injury to the leg because they were wearing saw chaps," de Hoop says. "The cost of these chaps – about $70 –is cheaper than a doctor’s visit. Many loggers will tell you that saw chaps are hot in summer but still worth wearing because of the protection."

"Despite their cost, they’re not as effective as leg protection because of natural design limitations," he says.

"Rubber chainsaw boots that have the saw protection molded in are the most effective because the saw teeth have difficulty biting into rubber, and they are also cheaper - $100," de Hoop says. "By contrast, chainsaws cut very easily into heavy leather."

Chainsaw boots are available at forestry and logging supply catalog stores. They can be searched readily on the internet.

Since chainsaws spray small wood chips in all directions, de Hoop says some kind of eye protection is critical. Common safety glasses, goggles and face screens are effective. In hot weather, perspiration can cause fogging of goggles and face shields.

"Luckily, screens or glasses that wrap around to the side of the eye are effective," he says.

"For about $45, you can purchase a chainsaw helmet system," de Hoop says. "This is a hardhat with earmuffs and face screen attached. The muffs and screen can be flipped out of the way easily when not needed."

While this is a convenient package for occasional users (and professionals), de Hoop says a major drawback is that the muffs are hot in Louisiana’s summers.

"A popular and effective alternative in hot weather is an ordinary hardhat, ear plugs and wrap-around sunglasses," he says.

Hand protection is also important. Gloves are available with a ballistic nylon lining on the back, specifically for chainsaw use.

Being properly outfitted for chainsaw use is only the beginning of chainsaw safety, de Hoop says. Proper training, fueling, starting, cutting techniques and maintenance are all important, too.

"All chainsaw users should obtain and wear proper PPE to reduce the chance of serious injury," de Hoop says. "Obtain them before cleaning up storm-damaged trees."

He also suggests they also make excellent birthday and holiday gifts for the firewood season.