Salt Contamination Of Soil After Rita May Not Be As Bad As Feared; Tests To Begin This Week 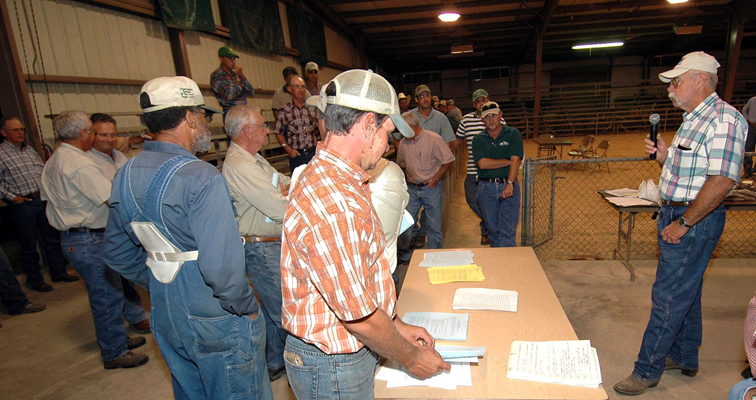 LSU AgCenter county agent Howard Cormier, at right, speaks to participants in a meeting about possible salt contamination of soils in Vermilion Parish resulting from Hurricane Rita’s storm surge. Comprehensive testing will begin this week (Oct. 25), but officials said the results may not be as bad as they originally feared.

The LSU AgCenter soon will begin comprehensive tests for salt contamination in areas of Vermilion Parish hit by Hurricane Rita’s storm surge, but officials this week said the problem may not be as bad as originally feared.

"Our advice to you is holding off may be the best thing," Howard Cormier, LSU AgCenter county agent in Vermilion Parish, told a group of more than 50 farmers Wednesday night (Oct. 19).

Cormier said preliminary testing showed high salt levels in the Henry area, but low levels were found to the west in the area south of La. Highway 335 near Nunez.

The advice from Cormier was not to disturb the soil and to hope for a cleansing rain. On the other hand, pumping water onto a field could push the salt deeper into the soil, he said.

Fields that held saltwater for several days could have high salt levels, and deep water can push the salt deeper into the soil, Cormier explained.

LSU AgCenter rice specialist Dr. Johnny Saichuk said testing will be start Tuesday (Oct. 25) on a grid pattern in Vermilion Parish to determine an overall pattern of saltwater concentrations. Not all farms will be tested, however, he said.

"We just don’t have the personnel to sample everyone’s field." Saichuk stressed.

Saichuk said the sampling teams, organized by the LSU AgCenter, will be in the countryside starting Tuesday, going from field to field to collect the small samples.

In addition, farmers brought individual samples Wednesday night for testing, and results will be available later.

"There are indications some of you might not have any problems at all," Saichuk said.

Saichuk said salt may not have much effect on fields flooded before the hurricane, since the soil already would have been saturated.

"If you had cracks in the soil and the water went down, that’s not good," he said of dry soil, however.

Saichuk also said dead vegetation doesn’t necessarily mean high salt levels in the soil. For example, Saichuk said Bermuda grass turns brown when it can’t get enough sunlight as would be the case when it was flooded or covered with mud. And the white crusty material being found on vegetation isn’t an indicator of salt either, he said, adding that it probably is deposits of several minerals.

The LSU AgCenter rice expert said adding gypsum to the soil to remove salt is an expensive option and should be used only for extremely high salt levels.

Girouard said farmers in southern Vermilion Parish are accustomed to the problem of salt-laden irrigation water – but not floodwater from the Gulf of Mexico.

"We’re dealing with a new situation for us," said Dr. Steve Linscombe, director of the LSU AgCenter’s Rice Research Station.

Farmers can submit soil samples, but they are advised to contact county agents in parish LSU AgCenter offices first.

"Specific methods should be used if the tests are to be accurate," Saichuk said. "Samples obtained without care may provide erroneous results, and, as an old pilot once said, `I would rather fly a plane with no altimeter than one that is wrong.’"