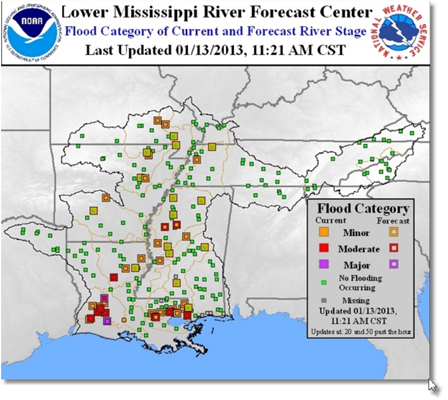 Click the image to see river stages and forecasts.

The LSUAgCenter.com/Floodmaps portal displays Flood Insurance Rate Maps (FIRMs) of FEMA's National Flood Insurance Program.  These maps are the basis for flood insurance rating and local regulation of floodplain development.  The portal has the current, pending and most recent historic FIRMs for all parishes in the state. The portal was developed under contract to the Louisiana Office of Floodplain Regulations in LaDOTD, with support from state coastal protection and FEMA's Map Modernization and Community Assistance funding programs.

The LSU AgCenter Flood Maps portal was created to help the people of Louisiana engage in the process of revising the FIRMs for their communities. When a preliminary map has been developed for a community, this web site allows people to see both the current (effective) and preliminary (proposed) maps, so they can see how the maps will change. You can find your property on the map using an address or by reference to a road map or aerial photo.
It is important when using these maps during a flood threat to understand what the maps represent and what they do NOT represent. (See What you need to know about the flood maps on the LSU AgCenter Flood Maps portal, below)

Using the LSUAgCenter.com/Floodmaps portal when waters are rising

For any point on the map you can see whether the area has been identified as a special flood hazard area (SFHA). The SFHA has a 1% chance per year of being inundated by rising water. Areas protected from rivers by "100-year levees" are NOT in the SFHA unless they flood from some other source, such as poor drainage or other rivers and streams running through the parish.  For example, New Orleans is protected from the Mississippi River and Lake Pontchartrain by levees, but many areas flood due to rain that exceeds the capacity of drainage canals and pump systems. Similarly, Baton Rouge is protected from the Mississippi River by a levee, but has extensive flood hazard areas associated with the Amite and Comite Rivers, which run through and east of the parish.

The flood level at your location is seldom the same as the reading on the nearest river or tide gauge. Some river gauges use a different vertical reference than USGS uses when providing ground elevation to our map portal. A correction factor must be applied.  See "Using LSU AgCenter Interactive Maps to Find Ground Elevation" for more detailed instructions on using this interface and to obtain the correction factors for comparing ground elevation to certain river gauges in Louisiana.