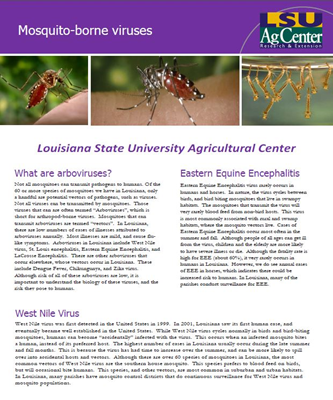 Please click on the image above for the PDF version.

Not all mosquitoes can transmit pathogens to humans. Of the 60 or more species of mosquitoes we have in Louisiana, only a handful are potential vectors of pathogens, such as viruses. Not all viruses can be transmitted by mosquitoes. Those viruses that can are often termed "Arboviruses", which is short for arthropod-borne viruses. Mosquitoes that can transmit arboviruses are termed "vectors". In Louisiana, there are low numbers of cases of illnesses attributed to arboviruses annually. Most illnesses are mild, and cause flu-like symptoms. Arboviruses in Louisiana include West Nile virus, St. Louis encephalitis, Eastern Equine Encephalitis, and LaCrosse Encephalitis. There are other arboviruses that occur elsewhere, whose vectors occur in Louisiana. These include Dengue Fever, Chikungunya, and Zika virus. Although risk of all of these arboviruses are low, it is important to understand the biology of these viruses, and the risk they pose to humans.

Eastern Equine Encephalitis virus rarely occurs in humans and horses. In nature, the virus cycles between birds, and bird biting mosquitoes that live in swampy habitats. The mosquitoes that transmit the virus will very rarely blood feed from non-bird hosts. This virus is most commonly associated with rural and swamp habitats, where the mosquito vectors live. Cases of Eastern Equine Encephalitis occur most often in the summer and fall. Although people of all ages can get ill from the virus, children and the elderly are more likely to have severe illness or die. Although the fatality rate is high for EEE (about 60%), it very rarely occurs in humans in Louisiana. However, we do see annual cases of EEE in horses, which indicates there could be increased risk to humans. In Louisiana, many of the parishes conduct surveillance for EEE.

West Nile virus was first detected in the United States in 1999. In 2001, Louisiana saw its first human case, and eventually became well established in the United States. While West Nile virus cycles normally in birds and bird-biting mosquitoes, humans can become "accidentally" infected with the virus. This occurs when an infected mosquito bites a human, instead of its preferred host. The highest number of cases in Louisiana usually occur during the late summer and fall months. This is because the virus has had time to increase over the summer, and can be more likely to spill over into accidental hosts and vectors. Although there are over 60 species of mosquitoes in Louisiana, the most common vectors of West Nile virus are the southern house mosquito. This species prefers to blood feed on birds, but will occasional bite humans. This species, and other vectors, are most common in suburban and urban habitats. In Louisiana, many parishes have mosquito control districts that do continuous surveillance for West Nile virus and mosquito populations.

Prior to the arrival of West Nile Virus in the United States, St. Louis encephalitis cases would occur annually in humans in the United States. Symptoms of St. Louis Encephalitis (SLE) are similar to those of the other Encephalitis viruses. This includes those ranging from mild flu-like illnesses, to cases with severe illnesses, and swelling of the brain (encephalitis). Although SLE rarely causes death, most severe cases occur in older adults. The biology of SLE is similar to that of West Nile virus. The virus is cycled between birds and bird biting mosquitoes that live close to human dwellings (such as the southern house mosquito).

Although LaCrosse encephalitis rarely occurs in Louisiana, a handful of cases have occurred in the state. The virus is most common in the upper Midwestern part of the United States. The cases normally occur in children, who are more likely to come in contact with the mosquito vectors. The virus cycles between small mammalian hosts (such as chipmunks) and mammal biting mosquitoes (the tree hole mosquito). Since this mosquito blood feeds on mammals, it will also take blood meals from humans. Illnesses are usually mild.

Dengue fever once occurred in the United States, but was successfully controlled by the late 1930s. Recently, the United States have seen increases in the numbers of human cases that have been acquired from local biting mosquitoes. Dengue virus requires no animal host. It will cycle between humans and human biting mosquitoes, such as those day biting species that live close to humans. Cases of illness are typically mild and may go unnoticed. However, Dengue is often termed "breakbone fever" due to the excruciating pain caused from the virus. Multiple infections with the virus can also lead to the hemorrhagic form of the disease. Recent outbreaks of the disease have occurred in Florida and Texas. In Louisiana, the vectors for Dengue virus occur throughout the state, especially in areas with higher concentrations of people.

Chikungunya gets its name from the Kimako language "that which bends up", referring to the arthritic pain caused by the illness. Chikungunya virus is an emerging arbovirus that has not yet been detected in the United States. Recent outbreaks of the disease have recently occurred in Europe and Asia, and the Carribean. Illnesses are often mild and may go unnoticed. Serious illness or death rarely occurs. However, most cases deal with long term health issues, such as severe joint pain. The virus is transmitted between humans and human biting mosquitoes. In Louisiana, we have two very important species (yellow fever mosquito and Asian tiger mosquitoes) which are potential vectors of this virus. This species is most common in urban and suburban habitats, where it lays its eggs in backyard containers.

You can reduce your risk of mosquito bites by following a few simple rules. You should eliminate standing water on your property, as container habitats are home to the majority of arbovirus vector species. You should also replace water in bird baths on a weekly basis. Trashcans and buckets are extremely common habitats for immature mosquitoes. Check these habitats regularly for standing water. If you are unable to locate the source of mosquitoes, you can work with your local mosquito control program. In order to prevent mosquito bites, select an EPA-registered repellent and apply according to label instructions. Keep your windows and doors closed during the summer and fall, unless using proper screens withouth holes. Repair window and door screens prior to the mosquito season. You can also limit outdoor activity when mosquitoes are most active. If you must go outside when mosquitoes are active, wear lightly colored loose fitting clothing that covers both your arms and legs. 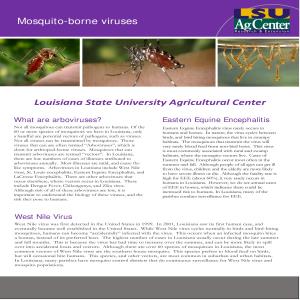