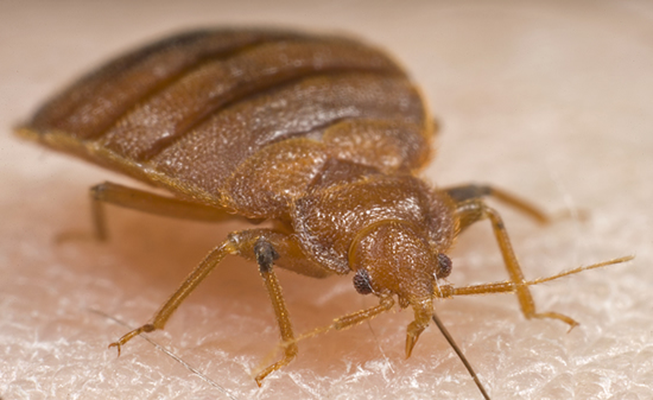 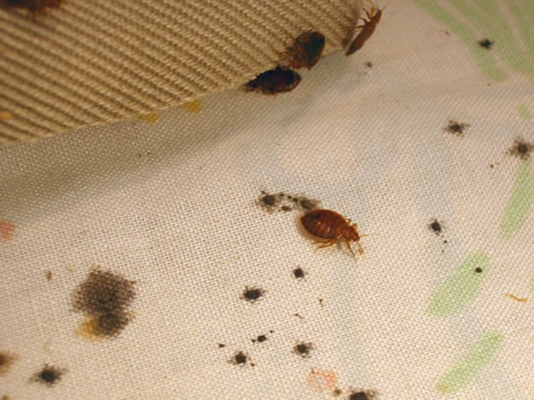 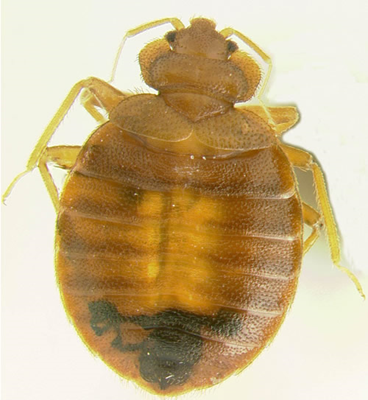 Bedbugs are pests of humans, domestic animals, bats, rodents, rabbits and wild birds. Worldwide, two species commonly attack humans. One of these, Cimex lectularius, is widely distributed over most of the world, and it is the species that is most common in temperate North America.

During the first half of the 20th century, the bed bug was a common household pest and was a scourge for travelers, for it was common even in “respectable hotels.” The importance of this insect gradually diminished with improvements in household cleanliness, personal hygiene and the increased availability and use of effective residual insecticides. In developed nations, they declined in incidence, and infestations became a rare event. In the last few years, this downward trend has started to reverse, and globally there have been reports of an increase in bed bug numbers.

There are five juvenile stages known as nymphs, each lasting 2.5 to 10 days. The nymphs are miniature versions of the adults in general appearance. Each nymphal stage requires at least one blood meal to molt to the next stage, and it takes 3-5 minutes to complete a blood meal. The length of the lifecycle is extremely variable and is dependent on temperature. The temperature threshold for development is about 60 degrees, with optimal development at 86 degrees. The total development time from egg to adult for C. lectularius varies from 24 days at 86 degrees to 128 days at 65 degrees. In average conditions, around 74 degrees, the lifecycle takes around two months to complete.

All nymphal stages and adults of both sexes require blood for nutrition and development. At low temperatures, nymphs may survive for five to six months without feeding, whereas adults can survive even longer. For example, in cold conditions, they can live almost two years, even without a blood meal. Mated females usually feed to engorgement and then begin to lay eggs three to six days later. Typically, each female lays two to three eggs a day. The cream-colored eggs are cemented on rough surfaces of hiding places, and nymphs will hatch within approximately nine days at a room temperature of 74 degrees. Also, depending on environmental conditions, female bed bugs may feed every three to four days.

The mouthparts of bedbugs are especially adapted for piercing skin and sucking blood. Bed bugs respond to the body warmth of a host and quickly locate a suitable feeding site. They tend not to live on humans, and the only contact is for a blood meal. Blood feeding typically occurs at night. They tend to seek shelter during the day and are inactive while digesting the blood meal. However, bed bugs are opportunistic and will bite in the day, especially if starved for some time.

Bed bugs seek shelter in a variety of dark locations, mostly close to where people sleep. These include under mattresses, floorboards, paintings and carpets; in various cracks and crevices of walls; within bed frames and other furniture; and behind loose wallpaper. Bed bugs typically stay in close contact with each other, and heavy infestations are accompanied by a distinctive sweet, sickly smell. Blood spotting on mattresses, bed linen, nearby furnishings and walls is often a telltale sign of an infestation.

Bed bugs are public health pests largely because of their nuisance biting, and often the most serious health aspect for many individuals is the mental trauma of knowing there is an infestation. Skin reactions, which are commonly associated with bed bugs, result from the saliva injected during feeding. Some people do not react to their bite, whereas others can experience a great deal of discomfort and loss of sleep from the persistent biting. The most commonly affected areas of the body are the arms and shoulders. Reactions to the bites may be delayed, with up to nine days before lesions appear. Common allergic reactions include the development of large wheals, which are accompanied by itching and inflammation. The wheals usually subside to red spots and can last for several days.

Although it has been suggested that bed bugs may transmit of a wide variety of infectious agents, there has never been a proven case of a disease agent  being passed on to humans by bed bugs.

To manage bed bugs it is essential that you locate the places they are living. Close inspections of beds and bedding, night stands around beds, curtains and shades, wall outlets near beds, lounge chairs, sofas, and pictures or telephones near beds. Several methods of control are available once their living locations are found.

Good sanitation methods are one of the best nonchemical means of controlling this pest. Vacuum the areas infested thoroughly and dispose of the bag immediately after tying it. The mattress and pillows can be steam cleaned, being sure to clean the seams and tufts. The mattress and box springs can be placed in a zippered plastic bag to prevent any missed specimens from reinfesting the home. Keep the bed from touching the walls. Bedding and curtains can be washed in hot water with detergent using borax as a supplement, or they may be dry cleaned to remove infestations.

Insecticides can provide a much quicker management response but should be used in conjunction with the sanitary measures listed above. Not only are they quicker, but they provide a better residual action that will last longer than just cleaning. A few  insecticides are available to the homeowner, are safe for home use and can be purchased over the counter. They should always be used according to label directions for optimum effectiveness and safety.

The insecticides available are classified by the way they are used: crack-and-crevice, indoor surface and indoor space. It is important to know the differences between these types of insecticides so they will be used properly and provide the desired management.

Crack-and-crevice materials may be either dusts or sprays and are used to reach hard-to-reach places. Dusts can be applied using a puffer or a paint brush. Dusts are lighter than sprays and should be used where there are deep cracks or crevices and behind electrical outlets. Sprays are not recommended around electrical outlets. Dusts can be applied by removing the covers and puffing the material into the wall voids. Dusts are also effective to use on mattresses, particularly when treating the seams and tufts.

Indoor surface areas are surfaces the bedbugs will travel when going to or from a host or hiding area. This is where residual sprays are most effective. The legs of beds and non-sleeping surfaces, the undersides of dresser drawers as well as the lower 2 feet of the walls and the under and lower surfaces of all woodwork should be treated to treat bedbugs that were missed. This will help to prevent reinfestation from untreated bed bugs.

Indoor space treatments are used to treat bed bugs on contact. These are most often in aerosol form. They are sprayed when the bed bugs are observed or hiding places are found. They are preferred when treating sensitive materials like clothing or stuffed toys. These items can be place in a closed contain or plastic bag, the aerosol sprayed into the bag or container and then sealed for several minutes. These materials can then be washed or aired before being used or played with.

The commercial applicators that treat homes and businesses have these and several other insecticides available for use to control bed bugs.