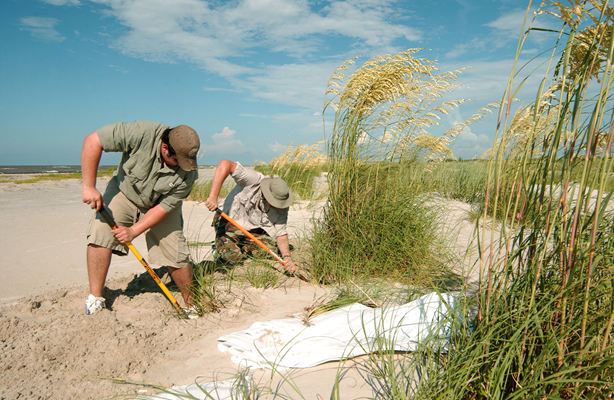 LSU AgCenter student worker Tommy Fontenot, left, and research associate David Wall dig up sea oat plants on Holly Beach. The plants will be divided and placed in greenhouses to produce plants for further testing. The goal is to produce new varieties of plants that will help create and preserve sand dunes on Louisiana’s disappearing beaches. 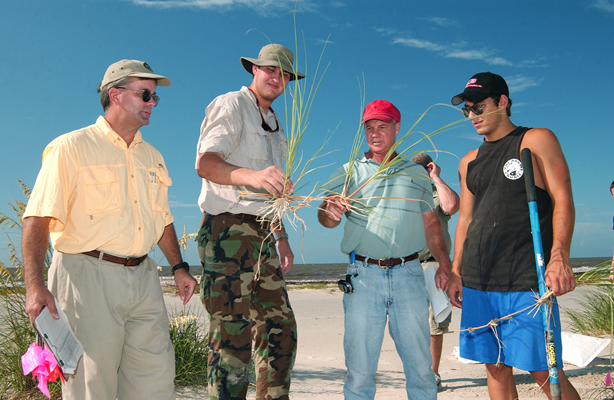 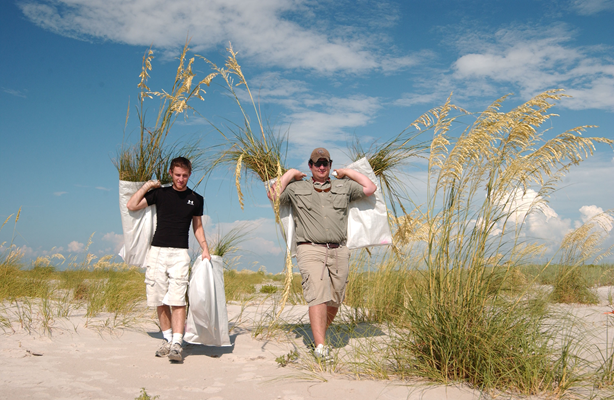 LSU AgCenter student workers Adam Stephenson, left, and Tommy Fontenot carry harvested sea oat plants across Holly Beach. Selected for spread, vigor and seed production, these plants were divided from research plants that are being evaluated for their potential in coastal restoration on Louisiana’s Gulf Coast.

HOLLY BEACH – Hundreds of sea oat plants bent in the breeze on a sandy beach as LSU AgCenter researchers walked among them, looking for plants with potential to help stem erosion on Louisiana’s Gulf Coast.

"What we have is about 1,000 plants, each of which is genetically different," said Dr. Steve Harrison, a plant breeder with the LSU AgCenter, as he stood on the beach about seven miles west of the community of Holly Beach this summer.

"What we’re doing here is comparing the survival, spread, vigor, seed production and aesthetic attributes of each of these plants and trying to narrow down the thousand to a list of maybe a hundred that warrant additional study," Harrison said.

The sea oats at Holly Beach came from seeds collected along the Gulf Coast from Texas to Florida and from the Atlantic Coast from Florida northward, according to Mike Materne, an LSU AgCenter coastal wetlands plant specialist.

The seeds then were planted in a greenhouse on the LSU AgCenter campus in Baton Rouge, and the plants were transplanted at Holly Beach and Biloxi Beach, Miss., in 2004. Researchers at North Carolina State University made similar plantings at Wrightsville Beach, N.C.

"Because each plant was produced from seeds, every plant is potentially genetically different," Materne said.

It’s the genetic variation that the researchers are looking for.

"Not a lot is known about sea oats in terms of genetics," Harrison said.

The Louisiana and North Carolina researchers are collaborating to identify plants that will grow best, hold sand and keep it from blowing away.

In the fall of 2004, the researchers began evaluating the plants at Holly Beach, and they made a second selection in July. They dug up parts of the selected plants, which will be divided and planted in greenhouses to produce plants for further testing.

Harrison said the selected plants will be evaluated in replicated tests at several locations along the Gulf and Atlantic coasts to compare them in detail. The LSU AgCenter researchers hope to be able to release a collection of these plants for coastal restoration in about 12 to 18 months.

"The first step is vegetatively to take the best plants here and to increase them and test them over a range of environments to identify those worthy of release as a vegetatively propagated restoration tool," Harrison said.

The plant breeder said native Louisiana sea oats aren’t very good seed producers. Few are left in the wild, because most of Louisiana’s natural dunes have been lost.

"Louisiana’s beaches do not have the high sand dunes found along the Atlantic Coast that most sea oats thrive in," Harrison said. "There are a few native sea oats that appear to tolerate lower dunes, but they have poor seed set, and there is not much genetic diversity left in the diminished populations.

"If we can identify some accessions from Florida or North Carolina that have reasonable adaptation and good seed production capability – and combine those traits with the ability of native Louisiana sea oats to tolerate lower dunes and wetter environments – then we are making real progress," Harrison said.

"Then, instead of strictly planting dune sites vegetatively, you’ll be able to produce seed and either spread the seed or at least produce many, many seedlings quickly," he said. "In addition, it will be easier to produce vegetative material for transplanting, and the material will be much better adapted."

Harrison said the LSU AgCenter is using plant improvement methods developed for crops such as wheat, soybeans and rice to improve sea oats and other coastal and wetlands plants while maintaining broad genetic diversity that’s important in an ecosystem.

"We are applying proven technology in plant breeding and genetic improvement to address ecological problems," he said.

Harrison said the sea oats are a primary dune plant with an extensive web of roots that trap and hold the sand. And that’s important along the Louisiana coast.

The beach where the researchers planted the sea oats was created by pumping in sand from 5 miles offshore to restore the coast and protect La. Highway 82 that runs along the Gulf from the town of Holly Beach to the Texas line.

Once the beach was created, however, it still needed protection from erosion, since nothing was preventing blowing sand from leaving the beach, said Materne. Large amounts of sand were drifting across the highway and into the marsh.

The first line of protection was the installation of 4-foot-high sand fences to stop the drifting sand and create dunes. They worked. The first year the fences created sand dunes deep enough to bury them. But what then?

The dunes were limited by the height of the fence, Materne said.

So the LSU AgCenter, along with a number of other conservation groups, planted the newly formed dunes with a native plant called bitter panicum. The dunes continued to grow as the plants trapped more sand and grew taller.

"The beauty of vegetation is that it is dynamic," Materne said. "Unlike a sand fence, which is a static structure, plants will respond to their surroundings."

The plants stop the sand, and as the sand builds up, the plants grow above the sand.

Now, a second, parallel fence is catching more sand to broaden the tops of the dunes and provide a greater buffer between the Gulf and the road.

LSU AgCenter researchers are looking for plants that have the ability to accumulate sand, withstand burial and continue to grow, Materne said. "Some plants within this plot are buried 2½ to 3 feet and continue to reach above the dunes they’ve created," he said of the bitter panicum.

The researchers are confident they can develop varieties of sea oats that can complement bitter panicum.

So far, some of the sea oats planted at Holly Beach have thrived. Originally in 1-gallon containers about 7 inches across containing three to four stems, the flourishing plants have grown to more than 2 feet in diameter with many more stems. They also have accumulated 1-2 feet of sand beneath them.

The researchers are trying to find plants that produce good seed. Materne explained some sea oats produce only about two viable seeds for every 30 flowers. Most, however, produce less than one seed for every 30 flowers and only a few seeds on each stem. At best, 50 percent to 60 percent of the seeds will germinate and produce plants.

"We’re looking for vegetative propagation and good seed production," Materne said. "Ideally, we hope to find five outstanding lines that can be expanded for commercial use."

He said the researchers expect to transplant the next group of sea oats to Timbalier Island, one of Louisiana’s barrier islands, which has just recently been restored.

"Vegetation is biological," Materne said. "It’s dynamic. It will continue to grow as sands accumulate. It will be taller. It will spread. It will expand and contract in relationship to its environment."

The beach restoration project at Holly Beach was funded with a grant from the Coastal Wetlands Planning, Protection and Restoration Act – commonly called the Breaux Act – and the sea oats field trials are funded by the U.S. Department of Agriculture’s Cooperative State Research, Education, and Extension Service.