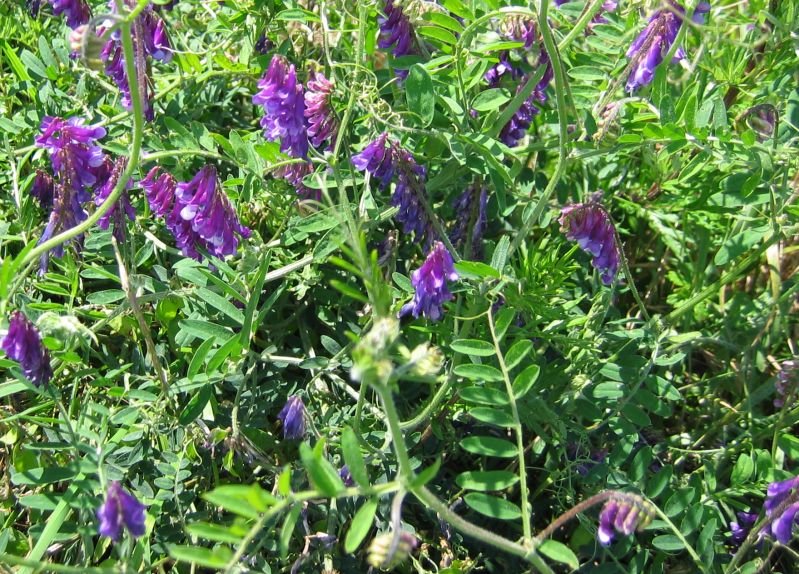 Click on the links above to go to the Louisiana Conservation Tillage home page or go to the printable version of Chapter 1. Chapter 2

Winter cover crops fall into two general categories – grass (grain) crops and legumes. The grass crops include wheat, rye and oats, while the legumes include such crops as the vetches, peas and clovers.

The winter grain crops can be grown for grain harvest or can be grown as green manure crops. The legumes will usually be grown as a green manure only. Green manure crops usually do not need fertilization and grow entirely on residual fertilizers. Winter grain crops require nitrogen fertilization but usually no other applied nutrients. Legumes do not require applied nitrogen but do require the appropriate nitrogen-fixing bacteria. Legumes have the ability to “fix” nitrogen from atmospheric nitrogen. Some of that "fixed" nitrogen will be available to provide low-cost nitrogen for the following summer crop – a very important feature that makes planting of legume cover crops practical and economical.

Other factors that are important in selection of cover crops are winter survival, biomass potential, maturity time, and nitrogen fixing potential. Discussion of the specific characteristics of the many available cover crops that can be planted in Louisiana are too extensive to be included in this publication, but information on the advantages and disadvantages of each are available from LSU AgCenter personnel in parish offices and research centers across Louisiana and from USDA Natural Resources Conservation Service field agronomists.

These are also possible summer cover crops, which have not been planted in the southern United States in recent years because summer crops are used as the principal income-producing crops for this region. Farmers are unwilling and unable to forego the returns that can be realized from warm-season crop production.

Summer cover crops may have a place in sugarcane production during the fallow period before planting a new plant-cane crop but, even here, a soybean grain crop is preferable to a cover crop. In fact, soybeans were once grown primarily as a summer cover crop in the southern United States, but soybeans' development as a cash crop during the 1950s illustrates the strong need and preference for a summer cash crop over a cover crop.

Other possible summer cover crops range from such crops as the familiar field peas or sorghum sudan grass to the more exotic such as sunn hemp. The sections below outline some of the important features to consider when planting winter cover crops.

Critical to the success of winter cover crops is planting date. To achieve the plant growth desired for ground cover and nitrogen fixation, cover crops should be planted early enough to establish stands and attain some growth before low temperature limits plant development. Early establishment also is important so the cover crop can suppress winter weeds.

Clover crops can be planted as early as August. Most clovers also have self-reseeding capability and will re-establish year after year under appropriate conditions – under a cotton canopy, for example, but they will be killed by herbicide or defoliate applications.

For best results, winter peas and vetches should be planted by October 15. Later plantings through November will be successful but will not provide as much winter ground cover.

Proper cover crop management is important to attain benefits without penalizing the productivity of the following cash crops. For maximum benefit, cover crops should have good biomass production before growth termination. The biomass produced protects the soil during the winter and provides the residue needed for ground cover during early summer. Legumes also must have attained a high rate of nitrogen fixation. The potential for biomass and nitrogen production are shown in Table 2-1 for several winter cover crops.

Winter cover crops must be killed completely before planting a summer crop to prevent competition for soil water and to minimize insect damage to the summer crop. Desiccation of the cover crop should be complete at least two weeks before planting the summer crop to avoid providing a “green bridge” that allows insects or diseases to survive on the growing cover crop. Optimal termination timing also is important to minimize reproduction of plant pathogenic nematodes on the roots of susceptible cover crops. Warming soil in the spring speeds up nematode growth and reproduction.

Optimal termination timing is therefore a balance between attainment of sufficient biomass and nitrogen fixation with the need for timely planting of the following summer crop. Because complete kill of winter cover crops is essential before planting the summer crop, all of the benefits of a winter cover crop will not be attained when the following summer crop is an early planted crop such as corn. Winter covers will not have accumulated maximum biomass or nitrogen when terminated in late February or early March, which somewhat limits the benefits of cover crops in corn production. Winter covers are better used in rotations with cotton, soybeans, grain sorghum or sweet potatoes - crops that can be planted after mid-April, which allows the winter cover to grow until early April, if necessary.

Both grass and legume cover crops will use the residual plant nutrients that have been applied as fertilizers to the previous crops. This sequestering of nutrients prevents their loss during the winter and early spring when rainfall in Louisiana is highest and nutrient loss through leaching and runoff is most likely to occur. Cover crops will assimilate and sequester up to 50 pounds of nitrogen per acre and significant quantities of other major and minor nutrients, as well. The sequestered nutrients in winter legume cover crops are mineralized quickly and will be available for use by the following summer crop. Grass cover crops, however, release the sequestered nutrients slowly in a process that may take 3 years. Until equilibrium is attained, additional fertilizer application may be needed to replace the nutrients held in grass residues.

The most consistent biomass producers for rotations in Louisiana are winter grains, hairy vetch and various types of winter peas. With warm winters and adequate water, cover crops can sometimes produce excessive biomass, in which case growth should be terminated at an earlier date to prevent problems with planting summer crops. The residue from cover crops should not be burned (which would destroy large amounts of plant nutrients) and should always be left on the soil surface to attain the conservation benefits.

As with biomass production, cover crops vary in the amount of nitrogen fixation. Hairy vetch and winter peas are some of the best winter legumes for Louisiana and will contain as much as 150 pounds of available nitrogen in the aboveground biomass, although 100 to 120 pounds is more typical (Table 2-1). Usually, about 70 percent of the nitrogen content of legume biomass is from nitrogen fixation, and the remaining 30 percent is from scavenging residual nitrogen sources.

Significant amounts of nitrogen are not fixed and stored in plant biomass until the plants enter reproductive growth phases. Winter peas are faster to establish and have faster early growth than vetch, providing more ground cover and nitrogen during fall and winter months. Clovers can produce higher levels of biomass and nitrogen fixation but only if planted very early. Otherwise, growth and especially nitrogen fixation occur too late in the spring for maximum benefit. Some clovers produce plenty of biomass and fixed nitrogen, but clovers are more difficult to manage than peas and vetches and have shown allelopathic effects on summer crops in Louisiana research.