Ongoing LSU research collaborations with farmers across Louisiana is leveraging data science to grow more and better food and fiber despite great challenges.

Slattery McCollam farms 2,800 acres of sugarcane near Schriever and Thibodaux in southern Louisiana, in Terrebonne Parish and Lafourche Parish. It’s a large farm—a land area equivalent to half of all football stadiums in the world.

McCollam is in his second year of a research project with the LSU AgCenter. Their shared goal is to produce more and sweeter cane while saving on fertilizer, primarily nitrogen. They use a combination of technologies, including drones, satellite imagery, and artificial intelligence, or AI.

Luciano Shiratsuchi, associate professor in the LSU School of Plant, Environmental & Soil Sciences and coordinator of the LSU AgCenter digital ag team, heads down to meet with McCollam on a regular basis. They crunch data and conduct experiments on a 40-acre field of sugarcane to find the literal sweet spot between inputs and outputs—the least fertilizer in, the most sugar out.

“We’re in our second year of research with LSU, and we already know more,” McCollam said. “We’re moving away from blanket applications of nitrogen toward variable rates where we get the most benefit. Now, we can look at the data and it’s all there in black and white. It’s not a guess. We’re not guessing anymore.”

Nitrogen is essential for the growth and vigor of sugarcane. But excess nitrogen, whichever amount doesn’t get absorbed by plants, gets washed into rivers and lakes and eventually into the ocean, contributing to algae blooms, lower oxygen levels, and the persistent “Dead Zone” in the Gulf of Mexico, which LSU has been monitoring since 1985. Too much fertilizer on farms can cause environmental problems that threaten habitats and important industries, such as fishing and tourism. For farmers, it also digs holes in their pocketbooks. This year, the price of fertilizer went up two and a half times, from about $300 to $750 per ton.

“That just really cuts into our bottom line because it’s a fixed cost,” McCollam said. “I can’t pass that onto the consumer—I’ve got to eat every price increase that comes to me. So, the only thing we can do is try to optimize and find that sweet spot. Not too high, not too low. Just right, and hope our crops continue to pay the bills.”

Shiratsuchi flies LSU drones over McCollam’s farm, called Ellendale. The drones are outfitted with multispectral cameras, which measure the amount of chlorophyll and photosynthetic activity, meaning growth and vigor, in plants. Thanks to GPS, the result is a highly detailed map, with variable health scores for almost every plant, row after row, where four different amounts of fertilizer are applied. When McCollam then goes on to harvest his sugarcane in the fall, he brings a combine with a yield monitor and GPS into the field, so they know if their previous measurements and yield predictions were correct. (It was only recently that sugarcane yield monitors capable of generating yield maps were launched commercially, and the LSU digital ag team is validating the technology.)

The rich data this research produces gets fed into a model that relies on AI and machine learning to find connections between hundreds of parameters that influence the growth of crops—not just nitrogen levels. The goal is to improve the model to where it can accurately predict how actions taken by McCollam today could help increase his profit, be it weeks, months, even years into the future.

“Sugarcane is grown in a three-year cycle, so it’s not the same as planting in the spring and harvesting in the fall,” McCollam said. “Before starting over, we harvest two stubble crops, and how much sugar we get depends on a lot of things, including the age of the crop. In two years, working with LSU, we’ll know exactly where we need to be with nitrogen, from start to finish.”

Slattery McCollam’s cousin, Gerald McCollam, works for the USDA in Houma on sugarcane research. The cousins often discuss how sugarcane farmers, and the sugar industry at large, are “always pressured and pushed” by forces out of their control, such as commodity pricing, the cost of fertilizer and fuel, foreign trade agreements, and that age-old topic—the weather.

“Weather can basically wipe you out and hurt you really bad,” Slattery McCollam said. “To me, 80% of our crop is weather. The other 20% is us.”

“The pressures are many, and anything we can do to mitigate challenges is something we’re interested in,” he said. “By and large, farmers are very savvy about what affects their bottom line. AI and machine learning can help us use only what we need when we need it, and that’s a very important thing for the sustainability of this industry.”

“Beyond optimizing yields, weed control is another very important thing in sugarcane farming,” Gerald McCollam continued. “Herbicides are expensive, and overuse leads to resistance where the plants you’re trying to control no longer are controlled by those herbicides. Poor weed management can destroy an industry if you’re not on top of it.”

All of the variables in agriculture don’t lend themselves well to controlled experiments in laboratories. Even with feet in the field on a daily basis, it can be hard to predict the size and quality of the upcoming harvest. That’s the central promise of using AI as part of the ongoing LSU-Ellendale collaboration, Gerald McCollam argues:

“The big data aspect is something that will allow us to take advantage of the variability and the complexity itself because patterns could emerge that we wouldn’t think to look for.”

Shiratsuchi tries to get results to Ellendale Farms as soon as he can.

“Farmers have to be patient since research isn’t a fast process, but using these AI and machine learning techniques, we can speed up the process compared to traditional experimentation that can take decades,” Shiratsuchi said.

LSU AgCenter is also working with industry partners to develop and validate emerging technology that tells sugarcane farmers the exact sugar content in their cane throughout the growing season. This helps farmers decide when to harvest and make better business decisions throughout the year.

“A lot of what our farmers are up against, from supply chains to the weather, is begging to be optimized by AI, and we finally have the data to do it,” said Thanos Gentimis, the LSU AgCenter digital ag team’s machine learning expert. “If you go back just 20 years, maybe one percent of farmers knew what a drone was. Now, we have an estimated adoption rate of around 13%, especially in larger operations. New technologies are transforming farming.”

His team is working toward AI solutions not just for sugarcane, but also for corn, wheat, and soybeans. Their goal is ultimately food security for all state residents and sustainability of the Louisiana agriculture industry.

“I personally focus on sugarcane and cotton because these two crops are strategic for Louisiana—you can’t grow cane and cotton in the Midwest,” Shiratsuchi said. “Our environment is unique, so our research has to focus on what makes money for the Louisiana farmer.”

This story was published in fall 2022 in Working for Louisiana: AI in Action. 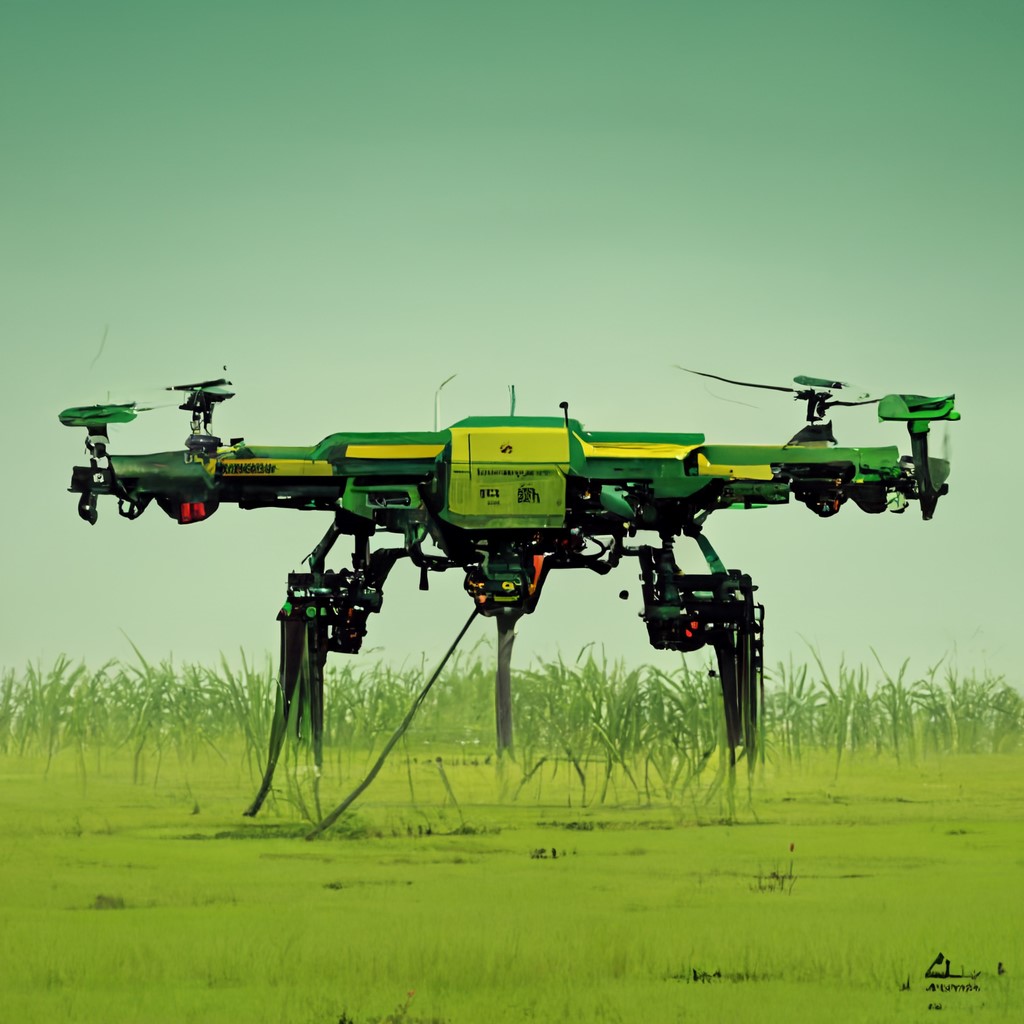 Seeing the green. LSU AgCenter’s digital ag team bridges data science and agronomy to help Louisiana farmers. Digital ag, and mainly precision ag, allows farmers to move beyond broadcast applications of seed, fertilizer, herbicides, and pesticides based on averages to instead optimize yields and profits, while lessening their impacts on the environment. Drones are integral to the remote sensing technology now increasingly used on farms. (Image generated by AI and featured in LSU’s fall 2022 issue of Working for Louisiana; the keywords were /imagine_digital_agriculture_green_sugarcane_drone.) 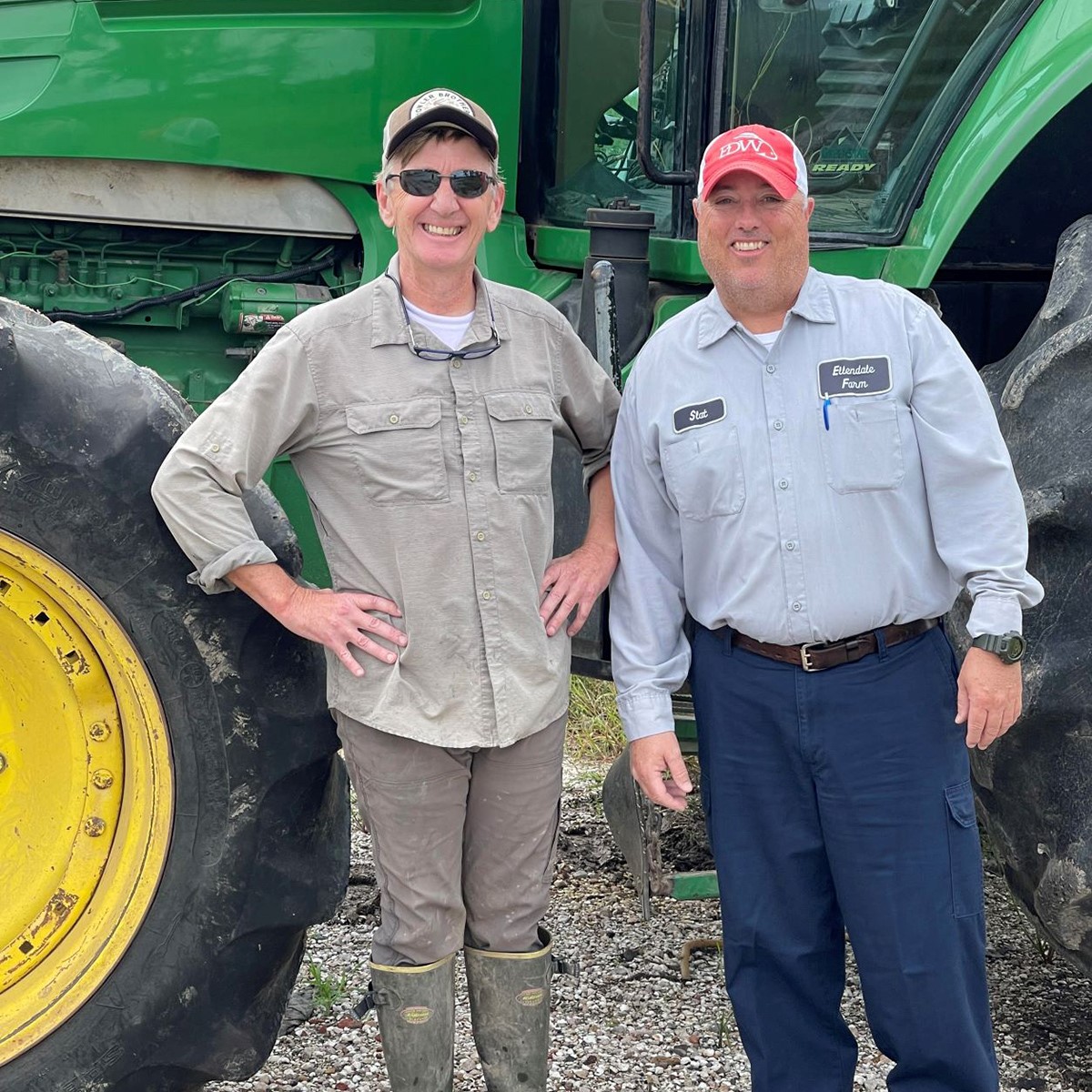 The McCollams. Cousins Gerald McCollam and Slattery McCollam come from a family that’s been in the Louisiana sugarcane business for generations. Ellendale Farms, LLC, near Houma, farms about 2,800 acres of cane. 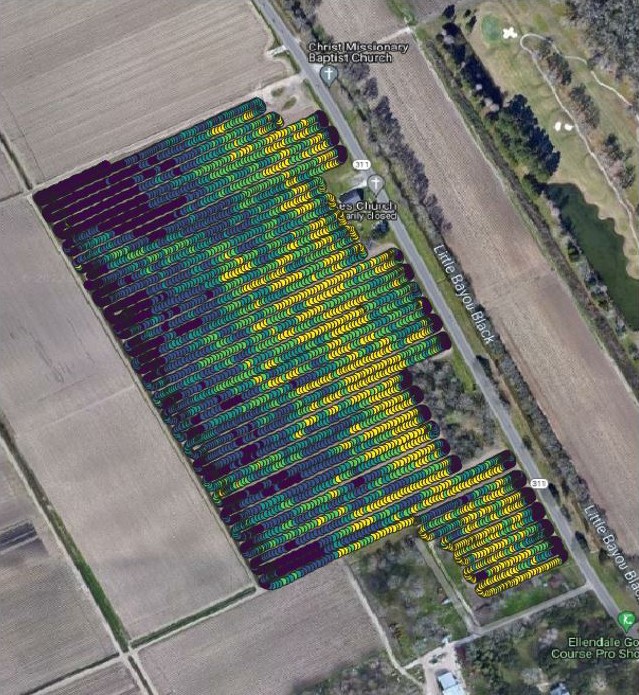 Prescription map. LSU AgCenter’s work on Ellendale Farms creates a detailed prescription map for exactly how much nitrogen is needed, row by row and almost plant by plant, based on sensor readings.