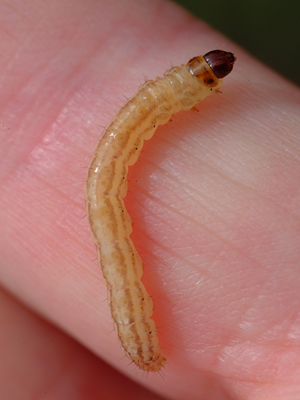 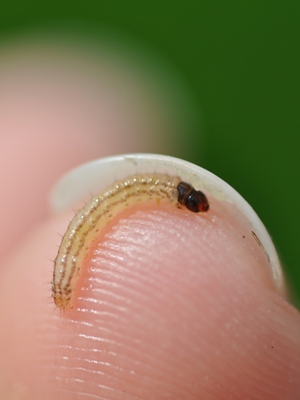 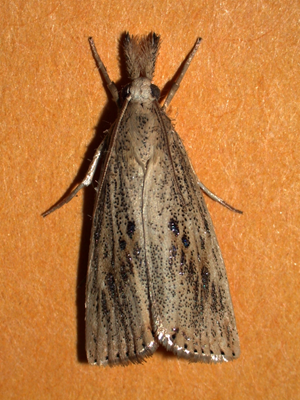 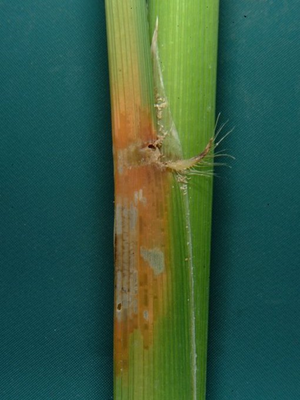 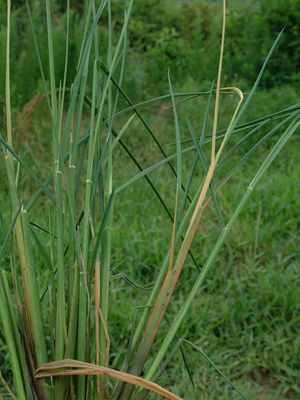 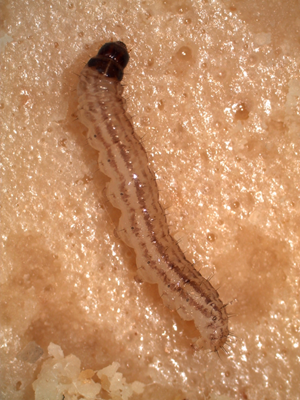 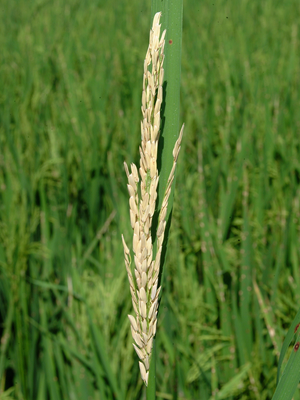 Adults are about 1 inch long with pale white fore and hind wings tinged on the edges with metallic gold scales. Front wings are peppered with small black dots. Flat, oval, cream-colored eggs are laid at night in clusters on the leaf surface. Larvae emerge and crawl down the leaf toward the plant stem. Larvae may feed for a short time on the inside of the leaf sheath before boring into the stem. Larvae are pale yellow-white with two pairs of stripes running the entire length of the body and have a black head capsule. Larvae move up and down the stem feeding before moving to the first joint above the waterline, chewing an exit hole in the stem and constructing a silken web in which to pupate. Pupae are about 1 inch long, brown and smoothly tapered. The pupal stage lasts 7 to 10 days. There are two to three generations per year in rice.

Damage caused by larva: Injury to rice results from larvae feeding on plant tissue as they tunnel inside the stem. Injury is often first noticed when the youngest partially unfurled leaf of the plant begins to wither and die, resulting in a condition called deadheart. Later in the growing season, these rice stems are weakened and may lodge before harvest. Stem feeding that occurs during panicle development causes partial or complete sterility and results in the whitehead condition. The white, empty panicles are light in weight and stand upright.

Facts: The rice stalk borer is a sporadic pest of rice in Louisiana. Rice stalk borers overwinter as last instar larvae in the stalks of rice and other host plants. Larvae pupate in the spring, and adult moths emerge in early to late June, mate and live on various hosts until rice stem diameter is large enough to support tunneling larvae. Although egg laying may begin in late May, injurious infestations usually occur from August through September. Early infestations are noticed when the youngest partially unfurled leaf of the rice plant withers and dies, resulting in a condition called deadheart. Stem feeding during panicle development causes whiteheads. Severe infestations cause stalk breakage and plant lodging. Once larvae enter the stalk pesticides are not effective.

What should you look for: Similar to other stem borers that injure rice, begin scouting for rice stalk borers at green ring and intensify at early boot stage. Look for orange lesions caused by the larva that feeds inside the leaf sheath before it bores into stems. Peel off the leaf sheath to expose the feeding larva or to detect the presence of frass to ensure it is the stalk borer and not sheath blight damage. Unfortunately, by the time signs of field infestations (deadhearts, whiteheads) are noted, it is usually too late to apply foliar insecticides effectively.

How you can manage Rice stalk borer: Destroy crop residues after harvest to reduce overwintering borer population. Plant early, especially in areas with a history of borer infestations. Early planting allows the crops to mature before the beginning of moth migration from other crops and non-crop hosts. Apply insecticides to coincide with larval emergence so larvae are killed before they enter the rice stems. Once larvae enter the stems, foliar insecticides are not effective.