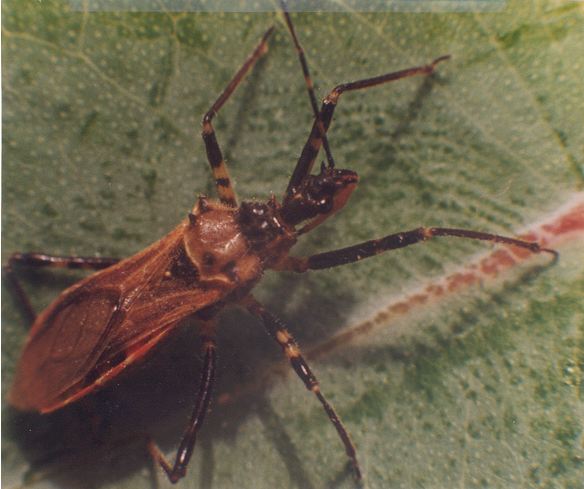 Adult assassin bugs are medium to large insects, and their color ranges from brown to green. They have long heads with a groove between the eyes and curved beaks. The nymphs are also important predators.

Braconids come from the Braconidae family, which is a family of parasitoid wasps. Braconids and ichneumonids are small black, orange, or yellow wasps that prey on immature insects such as cranberry fruitworm larvae. Adults are less than 10 mm long, and many species are found in blueberry fields.

Most parasitic wasps are tiny, and they often develop inside their hosts, so detecting them can be difficult. Some recognizable signs of parasitism include unusual host (pest) behavior, host body darkening, and the presence of emergence holes or cocoons on the pest.

Trichogramma wasps are egg parasites of many insects, including cranberry fruitworm and leafrollers. Parasitized eggs are dark black rather than the yellow-cream of healthy eggs. 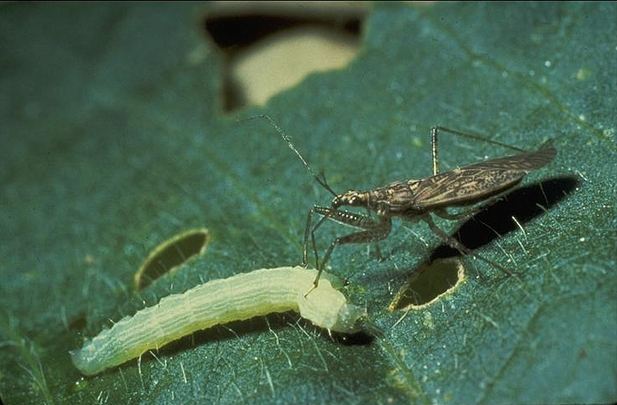 Adult damsel bugs are 3/8 to 1/2-inch long, tan to reddish brown and slender, with the body tapering toward the head. Nymphal stages are similar but lack fully developed wings. Legs are relatively long with the front pair enlarged slightly to capture prey. The head bears long four-segmented antennae and a four-segmented beak (rostrum). The beak is held underneath the body when at rest but is capable of being extended to pierce prey.

Life Cycle: Adult damsel bugs spend the winter in groundcover and winter crops such as winter grain and alfalfa. Eggs are inserted into plant tissue by females. Nymphs hatching from eggs develop through five stages (instars) in about 50 days. They are most abundant from mid-June through mid-August.

Syrphid fly adults resemble bees but have only one pair of wings and much shorter antennae. They can be seen hovering in the air near plants. Their larvae are predators.

Syrphid fly larvae are usually light green, legless maggots, rounded at the rear and tapering to a point at the head. When the maggot is crawling, the head moves from side to side .

The larvae eat aphids and other soft-bodied insects.

Tachinid fly adults are hairy and bristly. Their larvae feed on moth, beetle, and stinkbug larvae.

Robber flies are general predators that eat aphids, moths, beetles, and many other pests.

Green lacewing adults (10 mm to 12 mm) have net-veined wings and gold-colored eyes. They feed on nectar, pollen, and aphid honeydew. Some lacewing species are brown and smaller.

Lacewing eggs are suspended at the tips of long, erect stalks.

Lacewing larvae are alligator-shaped with long, piercing mandibles. They are active predators of aphids and other small insects.

In rare cases, lacewings have pupated inside the calyx cup of ripe fruit. 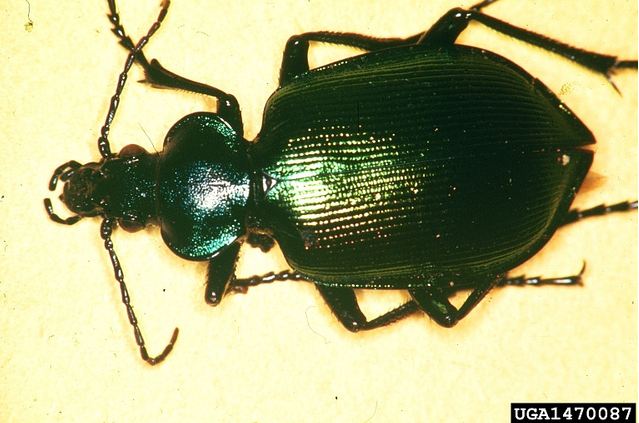 Ground beetles eat insects and weed seeds. They can feed on insect eggs, larvae, and pupae that are found on the ground, and some may search in the bush canopy for food. 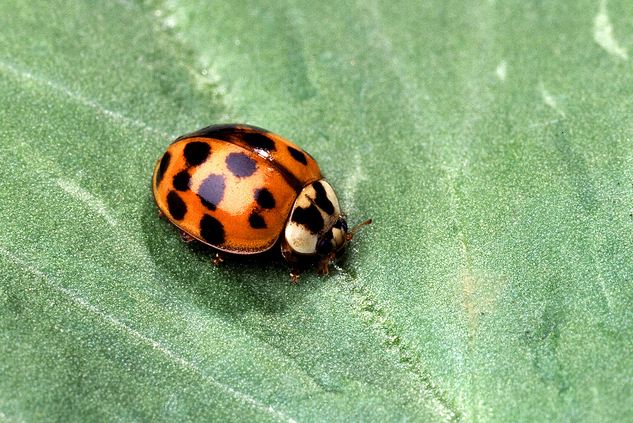 Several species of ladybeetles are active in blueberry fields. They are generally oval and red to orange with varying numbers of dark spots.

Both adults and larvae are predators, eating aphids and other small insects.

The multicolored Asian ladybeetle, an introduced species, feeds on pests during summer. They may be many colors with several or no spots.

Description: Adults are tiny (1/8 inch) black bugs with white markings at the base of the front wings (hemelytra), resulting in a band-like appearance across the body when wings are at rest. Wingless immature stages (nymphs) are orange. Anthocorids are occasionally mistaken for chinch bugs, particularly in the early nymphal stages. 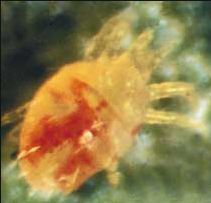 Predatory mites can be distinguished from pest mites by observing their movement. When disturbed, predators generally move more quickly than pest mites. A ratio of one predator to 10 pest mites is often sufficient for effective biological control. 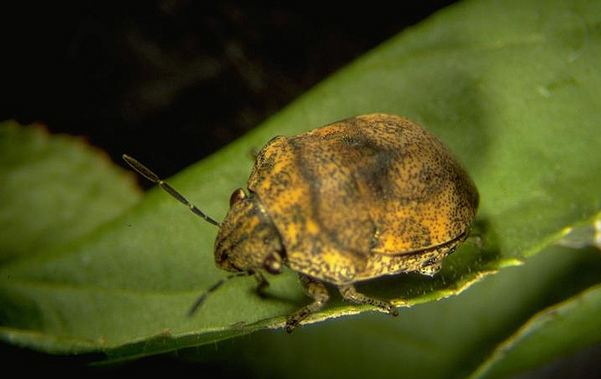 Many shield bugs or stink bugs (pentatomids) are predatory and can attack beetles and caterpillars. These bugs have glands in their thorax between the first and second pair of legs which produce a foul smelling liquid. This liquid is used defensively to deter potential predators and is sometimes released when the bugs are handled carelessly. They are called shield bugs because their bodies are usually shaped like shields.

Green lacewing adults (10 mm to 12 mm) have net-veined wings and gold-colored eyes. They feed on nectar, pollen, and aphid honeydew. Some lacewing species are brown and smaller.

Lacewing eggs are suspended at the tips of long, erect stalks.

Lacewing larvae are alligator-shaped with long, piercing mandibles. They are active predators of aphids and other small insects.

In rare cases, lacewings have pupated inside the calyx cup of ripe fruit.