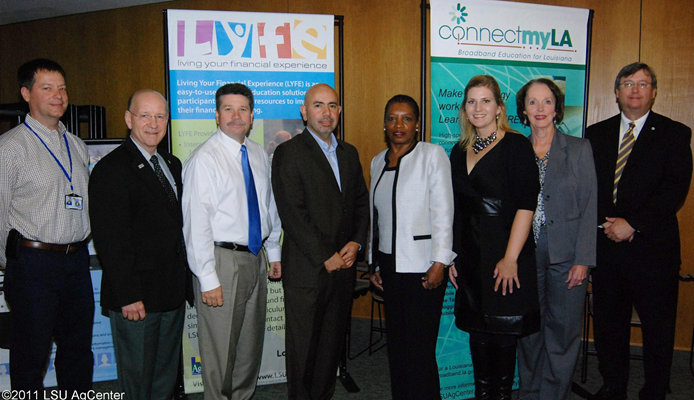 The LSU AgCenter was pleased to host the first Wireless Ed Roundtable in Louisiana on Oct. 24, 2011, in Baton Rouge. Speakers from WirelessED, Consumer Action, and the LSU AgCenter discussed the importance of broadband Internet connectivity at the meeting hosted in Efferson Hall and broadcast out to Acadia, Franklin, St. Tammany and West Carroll parishes.

Dr. Paul Coreil, LSU AgCenter Vice Chancellor for Extension, addressed the group on the importance of broadband education and awareness.

Mr. Wynn Lawrence, AT&T State Director for External Affairs, stated, “AT&T is proud to be part of this educational opportunity. Wireless Ed is new, and this is the fifth Wireless Ed training in the country.” The others were in Boston, Mass.; Hartford, Conn.; Oakland, Calif; Washington, D.C.; and now Baton Rouge, La.

Nelson Santiago from Consumer Action spoke of a recent study where Americans were asked what was the last non-necessity item they would give up, the results were 53 percent cell phone, 32 percent Internet, eight percent cable, four percent eating out with approximately one percent each choosing gourmet coffee and shopping.

Different phones and phone options were discussed. The group was shown tools on how to estimate your cell phone usage and the varying plans you can select.

Linda Williams of Consumer Action informed the crowd about the importance of understanding how to read your cell phone bill. Participants were given an activity to demonstrate charges commonly seen. Williams showed the group ways to reduce monthly costs.

Valerie Vincent and Dave Woerner gave an overview of the Connect My Louisiana program. Connect My Louisiana is a broadband Internet education and awareness initiative for Louisiana. The four-year project consists of developing and disseminating educational content to show the benefits of adopting broadband technology in business, education, health care and other aspects of economic activity in Louisiana.

Connect My Louisiana is initially focused on 18 parishes where broadband Internet is underused. The main activity will be providing consumers, business owners, local government representatives and many more public and private organizations with access to educational resources that promote greater broadband Internet adoption.

Todd Tarifa explained how to Live Your Financial Experience (LYFE). LYFE is an easy-to-use financial education solution for participants in need of resources to improve their financial well-being. The overall goal of the LYFE program is to increase financial literacy by providing research-based educational resources that will help schools and communities. Like the Connect My Louisiana program, the LYFE program exposes residents to various forms of technology by teaching through iPads and laptops.