Last year Louisiana wheat was devastated by Fusarium head blight (scab) because of warm and wet weather conditions during flowering. Weather conditions are currently favorable for wheat scab development statewide. Most of the wheat in the state is at or very near flowering, which is the most susceptible stage to scab infections. Wheat in southernmost production regions is already showing early signs of scab infection.

The disease is mainly caused by the fungus, Fusarium graminearum, which also causes ear, stalk, and root rots in corn. Symptoms of the disease will first appear 10 to 14 days after flowering as bleached heads which will be noticeable from the turn row (Photo 1). This symptom is often mistaken with the appearance of maturing wheat. Upon closer inspection, affected wheat heads will usually have infected kernels showing the characteristic bleached appearance with pinkish/salmon/light orange coloration along the glumes (Photo 2). This coloration is millions of microscopic spores (reproductive structures) of the fungal pathogen. There are usually healthy kernels along with the diseased kernels on the same head (Photo 3). In extreme cases, however, the entire head may be infected. At harvest, affected seed will be shriveled, off color, and much lighter than healthy kernels and are referred to as “tombstones” (Photo 4).

The pathogen over summers on corn, wheat, small grain residue, and other grasses. With that in mind, there are some cultural practices that may aid in management: crop rotation, tillage, mowing/shredding, or staggered planting/varietal maturity. At harvest, combine fan speed may be increased to remove infected seed, which is lighter than healthy seed. Additionally, seed cleaning equipment may help remove affected seed but may not be cost effective. These cultural practices alone will not completely manage FHB. An integrated approach is required to lessen the impact of FHB.

Triazole fungicides may be somewhat effective on FHB. Some earlier research indicated that tebuconazole (Folicur and generics) may reduce incidence and severity of FHB. Later research has shown that Prosaro (prothioconazole + tebuconazole), Proline (prothioconazole), and Caramba (metconazole) are most efficacious on FHB. THESE APPLICATIONS WERE MADE UNDER IDEAL CONDITIONS WITH IDEAL TIMINGS AND THE MAXIMUM CONTROL WAS AROUND 50%. AVERAGE CONTROL WAS ABOUT 40%.

Timing is critical. We have a very short window during flowering to make an effective application for FHB. The biggest problem is that ideal conditions (wet weather) for FHB infection are not ideal for making fungicide applications. Head coverage also is critical. Sprayers should be calibrated to deliver maximum water volume (minimum 15 GPA by ground, 5 GPA by air) and optimal droplet size (300 to 350 microns). For ground sprayers, nozzles angled at 30° to the horizontal will maximize head coverage. Some research has shown that dual nozzles angled in opposite directions will also increase head coverage.

It is common to see 2-3 years of epidemics of FHB followed by years with little to no disease. Judging by the amount of scab we saw last year and current weather conditions, the probability is high for another severe epidemic. An online (www.wheatscab.psu.edu) risk assessment tool that is based on temperature and relative humidity is available online, which has regional commentary that will help you to determine your risk at a given location.

Photo 1. A view of a field heavily-infected with FHB. 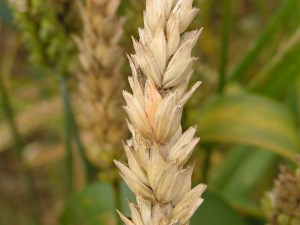 Photo 2. Closer view of a head infected with FHB. Note the salmon-colored fungal growth near the center. 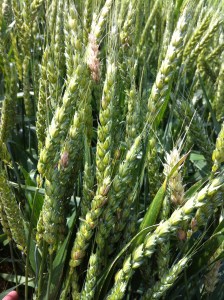 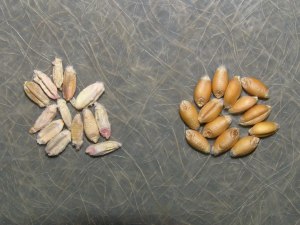