Wheat continuing to grow with colder weather near

In recent weeks, the wheat crop has experienced near optimum growing conditions across much of the state. This has allowed the wheat crop to develop rapidly, although the crop is still late in heading this spring. The return of cool weather will slow wheat development over the next week, and record-breaking low temperatures are expected for the state, especially in north Louisiana. With the impact of last season’s late freeze still fresh in our minds, it is understandable that many producers and managers are concerned with the colder weather. While the wheat crop has survived one of the coldest winters on record, much of the wheat crop in Louisiana is near the most cold-sensitive growth stage. As with the previous freezes, determining the growth stage of the wheat crop will be critical to determine how much potential damage can be expected should a freeze occur. Wheat still in the tillering to booting growth stages is relatively cold-tolerant and can withstand temperatures around 26 degrees F because the grain head is still relatively protected. Wheat is most sensitive to cold weather in the heading to flowering stages of development. As the crop further progresses to milk, soft dough and hard dough stages, the crop once again gains a degree of colder tolerance. During these cold-tolerant stages, the crop can sustain temperatures as low as 28 degrees F for up to two hours before critical damage can be expected. Wheat in the flowering stage can sustain significant damage with temperatures at or slightly below 30 degrees F for just a few hours, primarily due to sterilization of the pollen and resulting failure to set seed.

It is important to understand the damage that can occur with these lower temperatures at these advanced growth stages. Oftentimes, because the reproductive components are exposed, cold damage at these stages can often result in substantial yield reductions. Symptoms experienced at these stages are often associated with aborted kernel production with white, bleached seed heads.

Fortunately, for grower and managers across the state, temperatures are not expected to fall below freezing, and damage should be minimal and limited to cold packets of air. Temperatures are expected to return into the 70s and 80s for the remainder of the week, and the wheat crop should quickly recommence growth and continue to progress.

It can be expected that when this colder weather passes and warmer conditions return, the winter wheat crop will quickly recommence growth. In doing so, most of the wheat across the state will be near or past the flowering growth stage. It is critical to note that fungicides can be applied up to Feekes 10.1 or heading but cannot be applied once the wheat crop reaches Feekes 10.5 or flowering. Any applications at or beyond this stage are considered off-label.

For any further questions, concerns or comments, please contact: 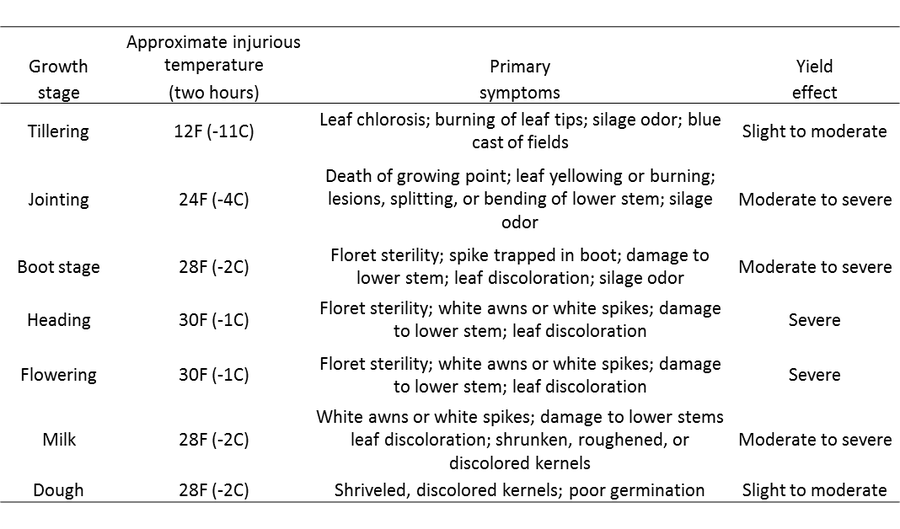 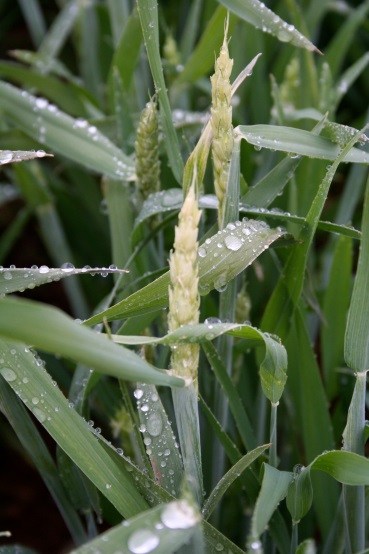 Wheat that has sustained frost/freeze damage can be noted by bleached or white seed heads.