In Louisiana, soybean planting practices vary across the state, due in large part to varying environments and cropping systems. Planting date, seeding rate, and seeding depth decisions should all be based on local conditions and factors affecting your farm such as soil moisture and temperature, soil type, and cropping rotation.

Regardless of location and cropping system, our optimal planting window will typically fall between April 10 and May 10. Although it is possible to produce high yields outside of this window, research from the LSU AgCenter has shown yields are most consistent when planted timely. Due to recent mild winters observed across Louisiana, it is not uncommon for soybeans to be planted as early as late March, though additional considerations should be taken to account for potential cool, wet conditions that are often observed. If growers intend to plant early, soil temperatures should be monitored so that soils reach at least 55 to 60°F by 10AM. The forecast for up to seven days after planting should also be considered for early planted soybean as emergence will also be affected by cool soil temperatures after planting.

Planting date of soybean, being a photoperiod sensitive crop, also directly influences the number of days to flowering. Timely planted soybean has more time and a greater potential to develop adequate vegetative infrastructure to support maximum yields than do late plantings. The goal of vegetative growth, as it concerns planting date decisions, is to close the canopy before R1 (first flower).

Because seed size can vary by variety and even by seed lot within a variety, pounds of seed per acre should never be used in determining seeding rates. Growers should calibrate seeding rates based on seed per foot (Table 1). Seeding rates that are too low do not allow for adequate vegetative infrastructure for optimal yields. On the other hand, seeding rates that are too dense can reduce yields, encourage disease proliferation and lodging, and increase seed cost. Research conducted by the LSU AgCenter has shown that soybean yields are not reduced with populations as low as 70,000 plants per acre as long as plants are uniformly distributed through the field (Figure 1). These same studies show that yields are not increased by increasing seeding rates as high as 175,000 seed per acre.

Plant only deep enough to place the seed in moist soil. Dependent on soil moisture, seed should be planted from 0.75 to 1.5 inches on sandy or silt loam soils and 1 to 2 inches on clay soils. Good seed to soil contact is imperative and must be a strong focus, especially when planting into residue from the previous crop or cover crop. Although planting deeper often results in reduced vigor, many of our varieties can emerge from depths below what is recommended and growers can err on the deep side if soil coverage is a concern.

Early season soybean disease concerns can include Pythium or Phytophthora species causing seed rot, damping off, or root rot in areas that are not well-drained. Group 4 seed treatment fungicides will provide some protection against these species. If soils are well-drained and planting conditions are optimal, disease caused by these pathogens is unlikely.

Pre-emergence seedling disease or post-emergence damping-off caused by Rhizoctonia solani is the most-commonly observed seedling disease in soybean in Louisiana (Figures 2 & 3). Plants surviving the seedling stage may develop a root rot resulting in delayed development and stunting. Stresses such as cold weather, nematode/insect infestation, or herbicide damage may exacerbate Rhizoctonia damping off. In recent years, significant stand losses have been observed in Louisiana due to less-than-ideal planting conditions. Seed treatments containing a strobilurin (Group 11) or SDHI (Group 7) compound are very effective at reducing incidence and severity of Rhizoctonia damping off. The pathogen population, which is soilborne, may be reduced during long periods of flooding, high soil temperatures, or fallowing fields. Potential for disease is greater in lighter soils, and optimal conditions for disease development are 75 to 90°F with 30 to 60% soil moisture, although the pathogen is capable of causing disease at lower temperatures and in any soil type.

In recent years, “base” fungicide seed treatments (usually consisting of metalaxyl/mefenoxam + at least one broad spectrum fungicide) are more-commonly found on soybean than in previous years. In most cases “base” fungicide seed treatments are adequate at protecting seedlings under adverse growing conditions that are often encountered early during the planting window. Results from many years of field research trials at multiple research stations in the state indicate that fungicide seed treatments will result in increased stand under moderate to severe disease pressure; however, realizing significant yield preservation and economic benefit in soybeans is the exception rather than the rule. If your seed company does not offer a choice of seed treatments, the “base” offering likely will be sufficient for establishing a stand under tough conditions. It is not necessary to over-treat base fungicides with additional fungicides in soybeans unless you are targeting a specific problem on your farm. Also, it is important to specifically know which fungicides come on the seed as it is redundant to over treat with a fungicide having the same mode-of-action. If seed companies offer “naked” seed, soybeans may be planted without fungicide seed treatment as long as you have no history of seedling disease issues, plant during the recommended window, achieve appropriate soil temperature and soil moisture, and schedule planting when the long term weather forecast is ideal for soybean development. If you prefer to plant fungicide-treated seed, significant cost savings may be attainable by allowing distributors to over-treat or treating naked soybean seed yourself with a product of choice.

One of the most important decisions producers must make when planting soybeans in Louisiana is planting date. Soybeans have the utility to be planted in early March to late June. This wide variation in planting dates exposes seedling soybeans to a multitude of insect pests that affect both above and below ground plant structures.

Soybean seedlings possess an exceptional amount of vigor and can tolerate a substantial amount of insect injury during the seedling stage. However, early planted soybeans may also encounter greater amounts of environmental fluctuations that affect air and soil temperature. Cool conditions can negatively affect vigor and under the right conditions stall plant growth and development. The addition of insect injury, to the aforementioned mentioned environmental conditions, increases stress the plant encounters resulting in loss of stand and yield potential. Therefore, the inclusion of an insecticide seed treatment (IST) provides growers a risk management tool when soybeans are planted early. The primary insect pests of early planted soybeans are bean leaf beetles, wireworms and grape colaspis.

On the opposite end of the spectrum are soybeans planted late, i.e. behind wheat or are late due to unforeseen circumstances such as inadequate or excessive soil moisture. These beans are more at risk for insect injury due to the potential for large insect populations to build in neighboring fields and generally more insects present in the environment. As a general rule with all agronomic crops, the later the crop the more insect pressure that will be encountered throughout the season. This is particularly evident when soybeans are planted into wheat stubble. Wheat stubble is favorable for the development of threecornered alfalfa hoppers and thrips. Thus, an IST is a sound investment when soybeans are planted late.

However, soybeans planted in a timely manner, that being within the recommended planting window, under optimal soil conditions, and low pest densities will often not benefit from the addition of an IST. Insecticide seed treatments typically produce the most benefits when environmental conditions are sub optimal as outlined in the prior paragraphs. With the current economic climate and many ag-professionals looking at areas to cut inputs, justifying the use of IST on soybeans when planted under optimal conditions becomes harder to support. Saving the cost of an IST can go to making a stink bug application later season that may provide a greater economic return.

In addition to early or late-plantings, there are other situations in which ISTs are justifiable. These include weedy fields with incomplete burn down applications, reduced tillage field arrangements, fields with historically problematic early insect pests (wireworms and/or threecornered alfalfa hoppers) and continuous plantings of one crop. Each field is unique and the use of ISTs as a blanket treatment over every acre may not be justifiable with $8 soybeans.

Farmers, consultants, and pesticide dealers often worry about injury to seedling soybean by a PRE herbicide and don’t want to use them. I have evaluated PRE herbicides in soybean for the past 8 years and rarely have I observed a reduction soybean yield due to early-season herbicide injury. Did some of these herbicides reduce soybean growth? Yes, but when growing conditions are proper, yield most likely won’t be reduced.

Figure 1. LSU AgCenter studies have shown seeding rates as low as 75,000 seed per acre are able to maintain optimal yield. 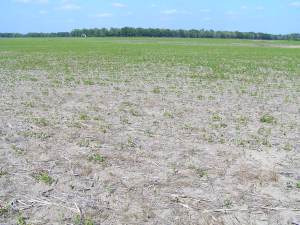 Figure 2. Thin soybean stand as a result of Rhizoctonia solani. 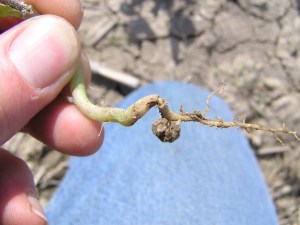