Over the next few days, producers across the state will begin to assess damages to soybeans brought upon by tropical system Harvey. Unfortunately, there is no cookie cutter answer to how a system like this will affect every grower. The main distinction of how varying situations will need to be assessed is the growth stage of the soybeans at the time the event occurred.

The lack of available oxygen for plant processes is the main concern in flooded fields. Oxygen is required for many essential plant processes including respiration, water uptake, root growth, and nodulation. When flood water covers a field, the oxygen concentration drops quickly and can be depleted in as little as 24 hours. However, depending on additional factors, soybeans can survive flooded conditions for up to 96 hours.

Temperature: Higher temperatures (ambient and water) will accelerate plant respiration, leading to a depletion of oxygen sooner than cool temperatures with cloudy weather.

Water movement: Even moderate water movement can increase aerification and allow oxygen to the plant roots.

Soil type: Flooding is potentially worse on poorly drained clay soils due to the reduction in hydraulic conductivity (the speed at which water can move through and out of the soil) compared to coarse soils.

According to research conducted in Baton Rouge in the late 1990s, the most sensitive growth stages of soybeans to flood stress are the early reproductive stages of R3 to R5 with yield reductions as high as 93% and 67%, respectively, when flood water remained for seven days (Linkemer et al., 1998). The lack of oxygen associated with flood waters reduces the plants ability to develop additional plant material due to a reduction of photosynthesis and respiration. At R3, the loss of yield is caused by a reduction in both the number of pods and seed size while the yield reduction at R5 is attributed mainly to seed size. The same study showed little loss in yield for soybeans flooded after R6 as this rapid seed fill stage is believed to be protected against temporary stresses (Linkemer et al., 1998; Westgate et al., 1989).

The yield losses discussed in these studies however, only refer to direct reductions of seed number and size by the plant. The studies presented do not account for yield and quality reductions caused by outside factors associated with these type of weather events. Late season flooding followed by warm conditions can become conducive to several fungal diseases such as aerial blight, anthracnose, pod and stem blight, and soybean rust. It is important producers continue to scout fields for an increase in disease incidence in the coming days.

Consideration should also be given to the possibility of seed rot and seed sprouting. Sprouting can occur in seed that have previously dried down to below 50% moisture before experiencing extremely wet weather. Additionally, ease of harvest can be reduced with soybeans that received an application of gramoxone just prior to the storm. As the leaves desiccate and are removed from the plant the stem can still imbibe water. With no leaves to aid in moving the water out of the stem, the stems will not dry down and producers can see an increase in green stem incidence in many fields. 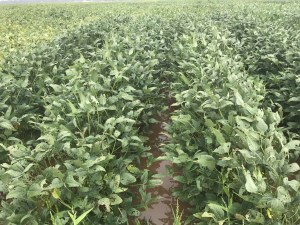 R5 Soybeans in standing water. Soybeans are most sensetive to flooding at growth stages R3 to R5. Todd Spivey 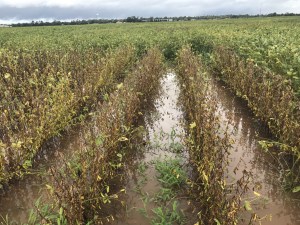