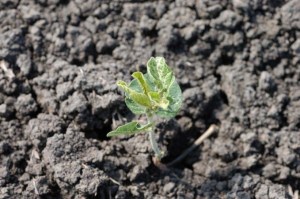 Soybeans are affected by a number of insect pests from emergence to harvest in Louisiana. Damage by these pests can cause reduced stand, foliage damage, stem girdling, and ultimately yield losses if extensive injury is incurred early in soybean seedling development.

With most soybean production practices involving some level of reduced tillage, soil dwelling insects have a favorable environment for overwintering and reproduction. Increased production costs and high soybean prices have made getting the soybean crop off to a healthy start an important consideration for growers. Planting in late March to early April exposes seedling soybeans to cool weather that can stall plant growth and increase susceptibility to insect pests. Actively growing plants can sustain considerable insect populations without any evidence of injury. Insecticide seed treatments (ISTs) have been documented to help control threecornered alfalfa hoppers, colaspis, thrips and suppress bean leaf beetles in seedling soybeans.

During dry weather conditions, when soybeans grow slowly, thrips populations can build to damaging levels and occasionally cause significant injury with some seedling mortality. Plant stress caused by herbicide injury can compound thrips injury causing plants to appear very poor. However, thrips rarely justify the use of an overspray except in cases where severe stand loss and defoliation are a possibility.

Threecornered alfalfa hoppers are small, wedge-shaped insects that damage young soybeans by puncturing the main stem resulting in a girdle near the soil surface. Girdling in soybeans 12 to 15 inches in height will result in some stand loss but rarely reduces yield. Early season damage in often compensated for by adjacent plants.

Colaspis beetles are small, oval shaped insects that can injury soybean roots as larvae and defoliate leaf tissue as adults. Larvae appear as small c-shaped grubs that can be found near the soil surface. Colaspis beetles rarely contribute to any appreciable damage; however, with large populations of larvae consuming lateral roots and soft portions of underground stems soybean plants may exhibit symptoms similar to nematode infestations.

Bean leaf beetles are small, (1/5 inch) in length, insects that are characterized by four large quadrangular markings on the elytra (wing covers) with a black triangle located centrally on the thorax behind the head. Bean leaf beetles overwinter in litter adjacent to soybean fields and damage to emerging seedlings can be extensive. Adult damage is characterized by round holes chewed into new leaves and the transmission of bean pod mottle virus is also a concern.

Producers have a variety of options with regard soybean ISTs. Monsanto and Pioneer’s base IST package utilizes imidacloprid with an upgrade to Poncho (clothianidin)/Votivo upon request. Syngenta’s Avicta Complete Beans and CruiserMaxx soybeans utilize thiamethoxam for the IST and Valent’s Inovate is based around clothianidin.

Research from the Mid-South has demonstrated an average yield increase of 3.5 bu/a with ISTs; while early season soybeans resulted in a 6 bu/a average increase in yield.

ISTs are effective in suppressing bean leaf beetles and controlling a number of early season soybean insect pests including thrips, colaspis and threecornered alfalfa hopper. ISTs are one of the BMPs recommended by the LSU AgCenter for soybean integrated pest management.