Most often the leaf pattern of senescence that we see in most years is one where leaf death begins at the bottom of the plant and slowly moves up toward the upper leaves. However this year, due the late season stress, leaf senescence is progressing from both the bottom and the top of the plant with green leaves remaining in the middle of the plant for some time until complete leaf senescence occurs. Also, these fields appear to cause an unusual golden glow in the upper canopy against the morning or evening sun. The impact or effect on grain yield will depend on how early in the grain filling period the death of the upper leaves occurs. This year, we might see some test weights on the low side. 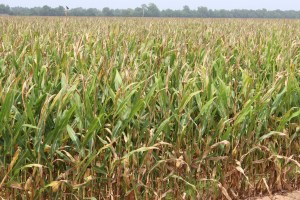