Corn: With all the flooding, how much nitrogen have you lost? 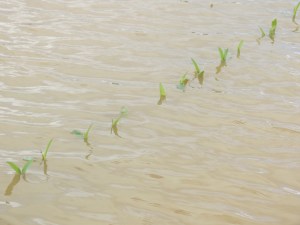 The rainfall events that occurred last week have caused tremendous damage to northeast Louisiana farm land due to flooding. In addition to the water received from the rainfall events, some farms were inundated with even more water as nearby bayous and rivers overflowed a few days later. Many of the hardest hit farming operations are still trying to save equipment, livestock, and assets from the rising flood waters. Some farming operations situated on higher ground, such as the Macon Ridge, may have been spared from the flooding but were still affected from the excessive rainfall nonetheless. One of the most commonly asked questions I have been receiving lately is: How much of my nitrogen (N) fertilizer have I lost in my corn crop? Unfortunately, the question is not that straight forward to answer. You really have to consider several factors. What N source did you use? Was it surface broadcast, was it incorporated in after application, was it banded in the soil (knifed-in), or was it dribbled on the soil surface? What was the soil moisture like at the time of application? How long after the fertilizer application did the flooding conditions occur? Was a urease or nitrification inhibitor used? Just to name a few.

Let’s begin by considering the N fertilizer source. First, we need to remember that nitrate-N is not stable under flooded, anaerobic (no oxygen) conditions and that it will be converted to a gas and lost very quickly by a process called denitrification. Ammonium-N, on the other hand, is stable under flooded, anaerobic conditions and will not be lost. Many farmers in northeast Louisiana use granular urea (46-0-0) or liquid UAN (urea ammonium nitrate; 32-0-0) as their N fertilizer source. The granular urea will be converted into the ammonium form after application through a process called hydrolysis. Therefore, if the flooding occurred quickly after urea application, most of the N will not be lost because it will be in the urea or ammonium form and will remain stable under flooded conditions. UAN on the other hand is made up of both urea and ammonium nitrate. The nitrate portion of UAN is approximately 25% while urea and ammonium-N make up the other 75%. Therefore, we would expect 25% of the N that is in the nitrate form to be lost very quickly after flooding.

Now let’s consider the amount of time that the fertilizer N was applied prior to flooding. Ammonium can be converted to nitrate under aerobic (oxygen present) conditions by a process called nitrification. The longer ammonium fertilizer was applied prior to flooding, the more of the ammonium will be converted to nitrate through a process called nitrification. The rate of nitrification depends on several factors including soil type, presence of nitrifying bacteria, and the temperature of the soil. Research has shown a wide range of nitrification rates based on the aforementioned soil properties, so for our purposes let’s assume that the average nitrification rate under cooler soil temperatures (<65oF) would be about 2.5% per day and under warmer soil temperatures the average rate would be at least 4.5% per day.

Using the N source, nitrification rate, and the addition of a urease or nitrification inhibitor, we can begin to estimate how much N will be lost under various scenarios.

Scenario 1. A corn farmer on the Macon Ridge knifed-in UAN at a rate of 200 pounds of N just after planting. The UAN was not treated with a urease or nitrification inhibitor. Saturated soil conditions occurred 12 days after planting and lasted for 2 days. The soil temperature was <65oF. How much N was lost?

Well, we know right away that 25% of the UAN is in the nitrate form and will be lost under saturated, anaerobic conditions. We also know that we have had 12 days for nitrification (conversion of ammonium to nitrate) to occur in a cool soil and that a nitrification or urease inhibitor was not used, so the nitrification rate will be about 2.5% per day.

Scenario 2: Granular urea (46-0-0) was treated with a urease inhibitor and was applied on moist ground 3 days after planting at a rate of 50 pounds N per acre. A one-half inch rain occurred 2-days later that incorporated the urea into the soil, minimizing volatilization (ammonia gas) losses from the urea. Flooding conditions occurred 15 days later and the field stayed under water for four days. The soil temperature was <65oF. How much N was lost?

This time all of the N is in the urea form to begin with and was protected from volatilization losses prior to the small incorporating rain. However, the urease inhibitor probably only kept the fertilizer in the urea form for approximately 5 days before it was converted into the ammonium form. Nitrification (conversion of ammonium to nitrate) could then occur for about 10 days.

Therefore, the loss of N from denitrification = 10 days * 0.025 * 50 lb N/A = 12.5 pounds of N per acre lost. In addition, I would expect that the corn would not be able to survive this situation and would have to be replanted.

Remember, these N loss estimates are not perfect. There are a lot of factors involved in estimating N loses that were not covered and it could be argued that the rates of nitrification or the time that a urease or nitrification inhibitor could differ depending on the research you use as your source. However, it is a good starting point and should help growers in northeast Louisiana determine how much N will be available in the soil once saturated soils dry and flood waters recede.