We have scouted several corn fields concerning reports of southern corn rust (SCR). These reports and field visits reveal an epidemic of southern rust across the state but in particular in the south central and central corn growing regions. Field surveys indicate that SCR has been reported in 25 of 64 parishes and might be in more that have yet to be surveyed. The LSU AgCenter does not recommend an automatic fungicide application to corn. However, when disease epidemics are progressing up to and including the soft dough stage, an application of a labeled fungicide can protect yield and quality and still be economically viable.

Ideally, fungicides should be applied prior to disease onset, but realistically, fungicides are usually applied at or just after onset. Therefore, individuals should make efforts to detect and treat diseases as early as possible to prevent losses to yield and quality. When it is determined an application is needed, a premix fungicide will offer wide spectrum activity (examples are: Headline AMP, Stratego YLD, Quilt, and Quilt Xcel). Follow label instructions for application timings, rates, etc. In most cases, a single application at tassel is justified when disease is present and active. The decision to apply a fungicide should be made on a field-by-field basis. The remainder of this newsletter will address disease identification and management considerations.

Southern corn rust can be found in Louisiana corn fields every year, but its impact on grain quality and yield is dependent on several variables. Although there is some level of resistance, it seems very low. The hybrids considered resistant to SCR in the past are no longer considered resistant, due to new race development found in Georgia four years ago. Therefore, the decision to manage SCR with fungicides should be based on a solid understanding of disease initiation and development. While this disease rarely develops to statewide damaging levels in most years, disease incidence and severity in individual fields may warrant a fungicide application. However, before applying a fungicide, several factors need to be considered. These include disease identification, environmental conditions favoring disease development, and the relationship between disease severity and yield loss.

Southern corn rust is caused by the fungus Puccinia polysora. Initial infections are caused by wind-blown spores. This is a warmer-season rust and, therefore, usually occurs late season and does not always have adequate time to affect yield. However, this rust is very aggressive and if disease epidemics initiate early (prior to or at tasseling), yields could be reduced.

Conditions favoring development include temperatures between 80 degreesF and 90 degrees F with high relative humidity or abundant rainfall. Once established, the spores can survive, spread and germinate at temperatures up to 104 degrees F.

Southern rust produces small circular to oval pustules and contains orange to light brown spores (Figure 1). Pustules are usually more abundant on the upper leaf surface and may also be found on the leaf sheath and husks when disease is severe.

The first line of defense for managing any corn disease should be selecting a disease-resistant hybrid. Since commercially available resistance is not an option, a fungicide may be needed. However, when SCR is not present a fungicide is not necessary. Another factor to consider is when SCR epidemics initiate relative to crop growth stage. The potential for yield loss is high when SCR develops prior to tasseling and conditions remain favorable for development during the growing season. When the rust initiates after tasseling, the potential for disease loss decreases.

The relationship of yield and defoliation can be found in Table 1 adapted from the National Crop Insurance Service’s Corn Loss Instruction. 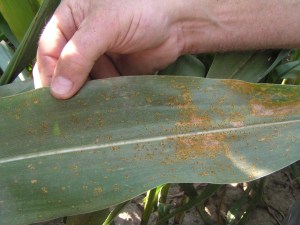 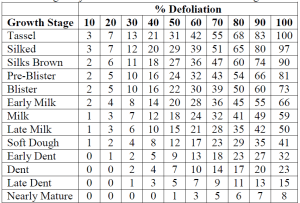