Damage to corn with severe weather

As the weather around the state is finally transitioning from spring to summer conditions, the corn crop has seen abundant growth in the past several weeks. With these increasing temperatures, it can also be expected that the number and severity of thunderstorms will continue to increase. Two major concerns with these increased thunderstorms for the corn crop are wind and hail damage. With the current corn crop beginning to reach critical growth and developmental stages, it is often wondered how much yield loss can be associated with these potential injuries. While the answer to this question seems somewhat straightforward, there are many factors that determine how detrimental the injury will be and how much yield loss can be expected.

When looking from a turn-row at a field that has been dam
aged by wind itmay appear that all wind damage is similar; however, this is far from the truth. Root lodging appears as the entire stalk has been blown over at the ground level with the roots appearing to be dislodged from the soil surface. This occurs when soil from heavy rainfall events becomes saturated and the roots can no longer support the corn stalk. While this may appear to be very detrimental to the corn crop, oftentimes, given good growing conditions following the event, the crop will reroot and the crop will continue to grow upward. In later growth stages, these stalks can be identified with having a more “goose necked” appearance. While the damage this lodging will have on yields will not be understood until harvest, root-lodged corn often looks worse immediately following the lodging event than the related yield damage; this is especially true prior to reproductive growth.

Snapped corn is a more severe effect of wind damage (often referredto a “green snap”). This effect can be seen after the emergence of the growth point from the soil surface. However, it is more common during late-vegetative or early-reproductive growth when high biomass is paired with high winds. Unlike root lodging, it is unlikely a plant that has experienced green snap will recover from the injury. However, the overall effect on field scale yield will vary based on how widespread the damage is and what stage the crop was when damage occurred. Studies from Iowa State University indicated that when green snap occurs early in the season, prior to V8, yield losses expected should be less than 15 percent. This is due to the ability of many of our modern corn hybrids with flex to adjust seed set. Prior to V8 stage, both ear size and kernel set, which occur from V8 through V14, have often not been fully determined. Therefore, with decreased surrounding competition, these plants have the potential to produce larger ears to compensate for the losses. However, when snapped corn occurs during late-vegetative or early-reproductive stages, both the severity and the yield impact are often higher with as much as 50 percent yield loss expected in severely damaged corn.

Hail, in addition to tremendous rain potential and damaging winds, can also be a damaging aspect. Hail damage can be very disheartening since the visual damage is often worse than it really is. With this being said, it is best to not attempt to evaluate a hail-damaged field the day of or the day following the event. Corn has an amazing ability to recover from damage, especially during early-season growth. Evaluation of these fields should be delayed until favorable growing conditions with adequate moisture have returned. This will allow the manager to determine which plants have recommenced growth and which have not. After these conditions have returned, managers can cut down the center of the stalk and look at the growing point. When determining the yield reduction of hail damage, two aspects should be considered: 1) stand loss and 2) reduction in photosynthetic leaf area. During early-season growth, if the growing point is firm and white, these plants are likely to survive; however, if the growing point has lost firmness or has turned brown or light grey, severe damage has occurred and the plant is not likely to survive.

The primary loss of yield due to hail damage comes from loss of leaf area. However, determining leaf area damage can often be challenging. Two critical aspects in determining how this reduction in leaf area can influence yield are: 1) percent defoliation and 2) growth stage in which the damage occurred. Determining the percent defoliation is probably the most challenging aspect. Often, even minimal to slight defoliation can appear to be severe defoliation. Evaluate damaged leaves compared to undamaged leaves to try to minimize the bias nature of this estimate. Once percent defoliation is determined, growth stage at which the event occurred will be needed. Often, following a hail event, growers and managers will scout the field the day of the event or the day following and growth stage should be evident. However, if time occurs between the hail event and scouting, in general, corn leaf emergence occurs at 1 leaf per 80 GDD prior to V10 and one leaf per 50 GDD after. Once these two aspects are determined, Table 1 can be used to assess potential yield reductions due to loss of photosynthetic tissue.

Damage from severe storms can be a very disheartening time. Luckily, the damage is rarely widespread, and therefore field- and farm-scale yield losses will be minimal. Currently, there have only been scattered reports of either hail or wind damage during the 2014 season, but we can expect storms to continue throughout the year.

For further questions regarding damage throughout the season, feel free to contact: 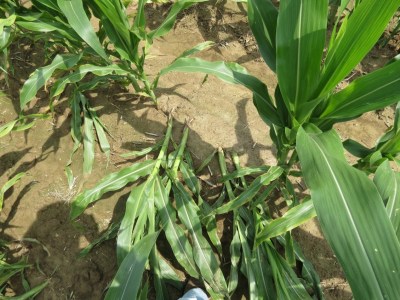 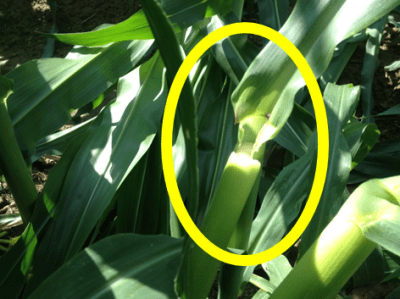