With the month of July currently upon us, we begin to see how different two years can be. Last year many were greasing up the combines and some very early corn was about to come off the field. However, this will not be the true on a state-wide basis for 2013 with the majority of Louisiana’s corn ranging from silking through dent. With harvest comes a sense of completion and satisfaction from intense hours of labor and management. However, there are some issues that should be addressed to not only ensure optimum production for the current year’s crop but also set up next year’s crop with the best opportunity to succeed.

While this article will not go into all of the growth stages in detail, a more complete description of most are given by Dr. Erick Larson.

This stage (as well as the previous stage VT- tasselling) is the final stage in which late-season N management can be made. However, in optimum situations this late-season management will have been during VT. This is because corn is extremely sensitive to stress during this period and any stress can have a large potential to drastically decrease yields.

This stage is the beginning of hard starch formation and the maturation of the kernels. While this does indicate the beginning of kernel maturation, it does not mean irrigation can terminate as final grain weight is still being determined and as much as 20% yield loss can occur from premature irrigation termination. Additionally, early termination can decrease stalk strength and has the potential to increase lodging, given the right conditions.

At this stage the crop is considered complete. It is typically identified by a black-layer which forms when hard starch has progressed throughout the kernel. When black-layer is achieved, most management practices, especially irrigation, have no further effect on the crop or final yield.

One of the more challenging management practices for corn production does not actually occur when the crop is in the ground and that is residue management. Corn produces a high amount of biomass, which can almost be a double-edge sword at times for the production system. Corn residue can contribute more than most row-crops to the soil organic matter content. Problems have occurred when corn stalks are cut too short or are shredded prior to winter. This can lead to high amounts of residue run-off with winter rains as well as impeding some production practices in early spring. In an attempt to alleviate these challenges while still allowing this valuable residue to contribute to improving soil quality, consider leaving corn stalks knee high in the fall. Over-winter the roots will do a better job holding the residue in place and by spring most of the residue will have decomposed enough where planting equipment can easily push over the standing stalks. In addition, these standing stalks will be easier to plant through than the residue “mat” that can occur due to shredding the residue in the fall.

As any soil scientist will tell you, correcting soil fertility deficiencies is much easier during the fallow season than while the crop is actively growing; however, much can be learned from the current crop to ensure optimum fertility for successive years. This can be done by using the actively growing crop and any yield data as a guide for identifying fields that might have a nutrient deficiency problem. Once fields have been identified, or if your farm has not been sampled in over three years, collecting soil samples can directly identify nutrients which will be deficient in next season’s crop. A detailed guide on correctly collecting soil samples can be obtained at the Louisiana crops blog (http://louisianacrops.com/2012/09/05/soil-samplingtesting-recommendations-for-louisiana/). Using these soil samples and problem areas within a field will help to create a nutrient management plan that can be a beneficial guide for not only short-term nutrient management planning but also for more long-term nutrient budgeting.

While compaction was more of a wide-spread problem in 2012, it can still cause problems with root growth and therefore cause phantom nutrient deficiencies. Many producers have the ability of running deep vertical shanks to break through any plow pans or hard layers that may be present. These activities will also allow for winter rains to penetrate the soil more deeply and build a greater moisture profile for the following crop. Deep tillage should be conducted when not only surface soil is dry but also when sub-soils do not have excess moisture because hard pan shattering will not be as affective.

With corn harvest in Louisiana occurring in late summer and early fall, it exposes the fallow ground for up to 6 to 7 months. Much can be done during these fallow periods to make early spring practices simpler as well as improve the potential productivity of the successive crop. Two management practices that should be considered are fall weed control and the utilization of cover crops.

Weed scientists at the LSU AgCenter have been warning that winter weeds are not only becoming harder to control due to resistance issues but also, if left unchecked, can create problems during spring burn-down. LSU AgCenter weed scientists have indicated that a proactive weed management program that utilizes at least one fall application paired with spring burn-down can be more efficient and help better control fall and winter weeds. For further details on specific weed control and area specific questions, contact you parish County Agent or Drs. Daniel Stephenson and Donnie Miller. Additionally, the below two links to the Louisiana Crops blog discuss these topics in greater detail.

While research identifying the benefits of cover crops in Louisiana is currently underway, much research is still needed to quantify the benefits. However, numerous other states have detailed the benefits to soil water holding capacity, water infiltration rates, suppression of winter weeds, and improvement of soil quality. In addition, cover crops can provide ground cover during the winter months, which are often times the most intense rainfall periods. With winter cover provided, either through previous crop residue or winter cover crops, soil detachment can be decreased and therefore surface runoff of soil sediment will be reduced.

While harvest within the coming months may indicate the completion of the current corn season, it indicates just the beginning of next year’s crop. If a producer is pro-active and starts their planning right away, it will provide the successive crop the best opportunity for optimum production. 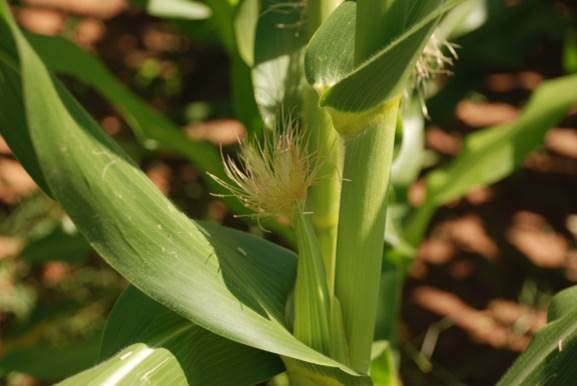 Corn at R1 or silking growth stage. One of the most yield sensitive stages for stress. (Courtesy of Dr. Ronnie Levy) 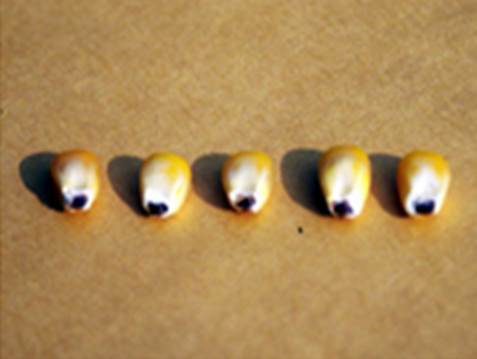 Physiological maturity or black layer. Typical management practices at or beyond this stage will have no further influence on yield. (Mississippi State Extension) 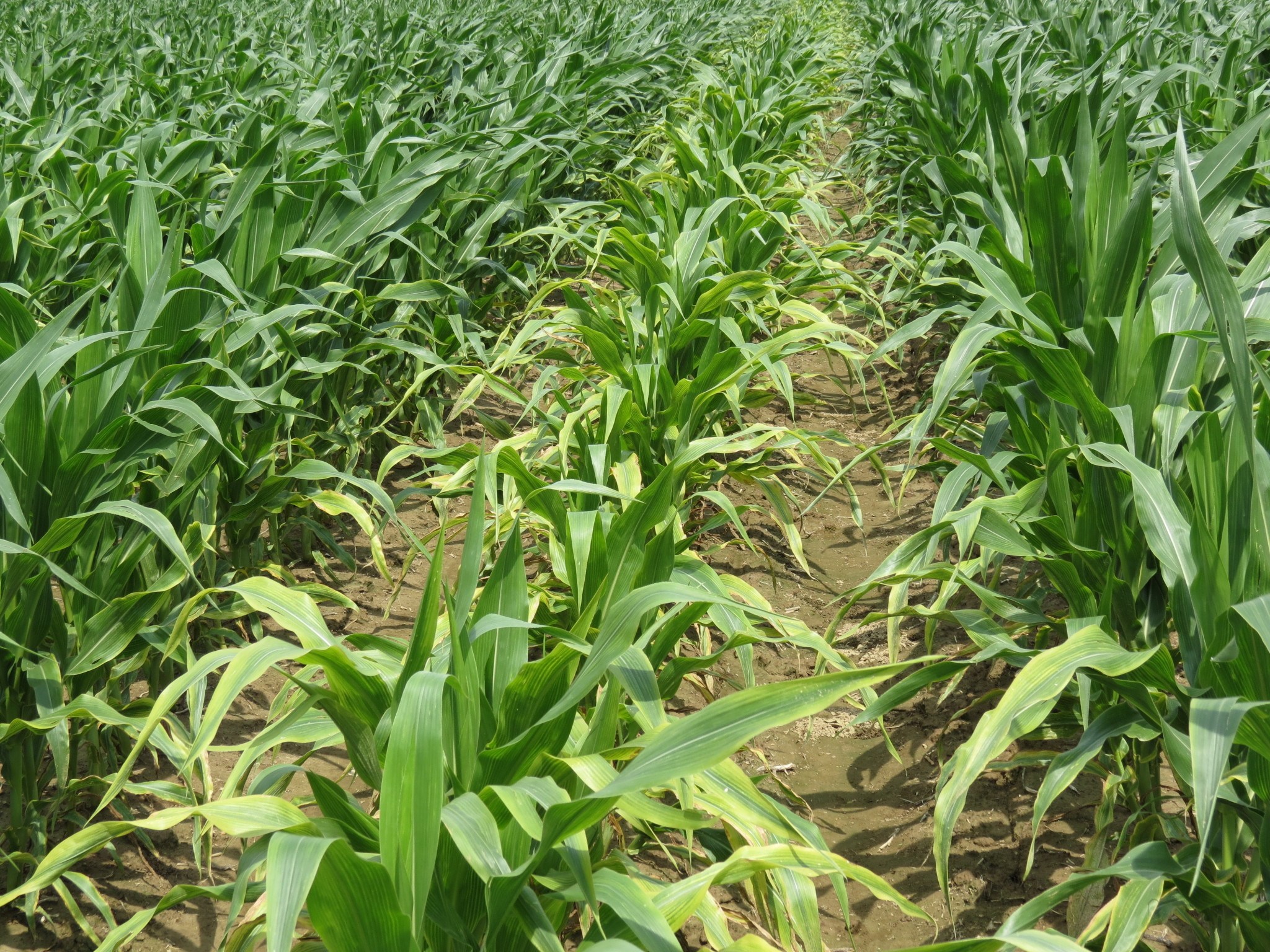