Recent severe weather in Louisiana has resulted in a number of reports of corn lodging throughout the state. With the current corn crop being within its critical growth and development stages, many are wondering what yield loss can be expected from this lodged corn. While this may seem like a fairly straightforward question, there is not an absolutely clear answer and it will depend on the lodging conditions. Firstly, not all lodging is created equal. Root lodging may appear as if the entire field had been “steam-rolled”. This typically occurs when the soil is relatively saturated and high winds cause the corn to appear as if the roots have been dislodged from the ground. Typically, given good growing conditions, corn stalks will continue to grow upward with a more “goose necked” appearance. While the severity of the damage will not be known until harvest, root lodged corn typically looks worst a day or two after the incidence occurs than what can be expected at harvest, especially if this occurs prior to pollination.

The other damage to corn from high winds is snapped corn. Snapped corn occurs when the main corn stalk is physically broken, with the highest potential of snapped corn occurring at actively growing nodes between V5-R2 growth stages (often referred to as greensnap). Corn stalks that have experienced greensnap will have a difficult time recovering and often times will die shortly after. However, overall effect of this greensnap on yield can vary with how widespread the damage is and at what growth stage the corn is at when the damage occurs. A study conducted by Iowa State University indicated that when only 25% of the total corn was lost at or before the V8 growth stage only 15% or less yield loss can be expected. These losses were higher when 50% and 75% of the corn was damaged (32% and 53% yield loss respectively) and when greensnap occurred later in the growing season (around tasseling). One potential reason for lower yield loss at early stages is the flex ability of many of our modern corn hybrids possess. Typically when damage occurred prior to complete determination of yield potential (ear size and kernel set, which occur between V8 and V14), the surrounding corn ears can partially compensate for the loss. However, when damage and corn stalk loss was more widespread or occurred after yield potential determination, the yield loss could not be compensated for and higher yield loss occurred.

A majority of damage reports from this last storm are ranging from single digit stalk loss to less than 30%. Therefore, yield loss should be minimal. However, even partially broken or damaged corn can lead to increase secondary disease, nutrient, and water stress in the coming weeks to months and careful attention should be focused on field that had injury to ensure minimal yield loss.

Root lodged corn at this stage will typically “out-grow” this lodging. 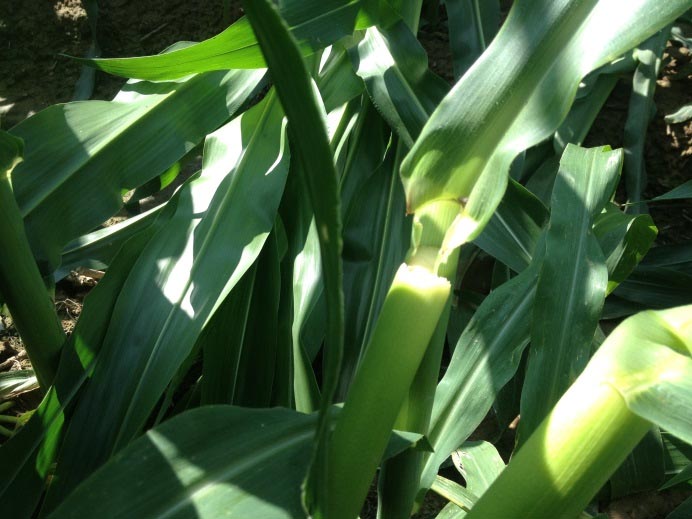 Greensnap in corn. Ultimately this plant will die; however, since the damage is not wide-spread the surround corn should partially compensate.