(04/28/21) BATON ROUGE, La. — Calling them the densest he’s ever seen, LSU AgCenter entomologist Blake Wilson was startled to find invasive apple snail egg masses in St. James Parish, but said preventative measures, and a little help from Mother Nature, can mitigate the spread and potential damage to the crawfish industry.

Wilson, who specializes in agriculture pest management research, had previously encountered high concentrations of apple snails, or Pomacea maculata, in Calcasieu, Vermillion and Lafayette parishes, with smaller concentrations in Cameron and Jefferson Davis.

Last week he received a call from a concerned crawfish farmer from St. James, who discovered the unmistakable bright, pink eggs. Wilson believes severe weather and flooding over the last year could have contributed to the spread.

“It’s likely they may have shown up on new farms following the hurricanes last year,” Wilson said. “Any type of flooding can create an easy way for them to get into isolated ponds.”

Currently, Wilson estimates that fewer than 3,000 of Louisiana’s estimated 200,000 acres of crawfish farms have been impacted, but those farms have been hit hard. According to Wilson, each apple snail egg mass can contain hundreds of eggs, with a female producing them every week to ten days in the summer months.

“They’re catching half the normal crawfish due to mature snails both clogging trap entrances and consuming the bait,” Wilson said. “In some fields, there has been more than a 50% reduction in the overall crawfish catch.”

Introduced to the Louisiana ecosystem around 2016, apple snails were sold in pet stores for aquariums as “Mystery Snails,” “Island Snails,” and “Giant Apple Snails.” The first sighting in the wild in Louisiana was in a swamp near Schriever, about 12 miles north of Houma, in Terrebonne Parish. Whether careless or intentional, a pet owner was the likely cause.

Carter said although young snails have a multitude of predators, humans should remain cautious when encountering the eggs, and definitely should not eat the adults.

“The snail hatchlings are a millimeter wide at most, so they are food sources for fish, turtles and have even been found in the stomachs of frogs,” Carter said. “But, in the egg stage, they emit toxins that can irritate human skin, and the adults carry lung worm, which can make people sick.”

Wilson said because many farmers dump crawfish in the late spring to stock their ponds for the next cycle, this is a crucial time to make sure not to inadvertently introduce snails to the ponds during that process.

“A main point I’d like to emphasize is not to move boats and equipment from infested bodies of water to those that are not infested,” Wilson said. “Anything near the surface of the water can get an egg mass on it and they can be introduced that way.”

Carter said the easiest way to destroy apple snail egg masses in the early, bright-pink stage is to, while wearing gloves, carefully scrape them into the water where they will be unable to survive and hatch. Once the hatchlings start to develop shells and become white, it’s best to crush them.

“At that point, you’re just helping them along with the maturing process if you move them to the water,” Carter said.

Wilson adds that mature apple snails are not particularly adept at moving across land without the aid of natural flooding occurrences. He encourages crawfish farmers to use well water for controlled flooding of their ponds, which many do. He said so far this is the best method to prevent further spread.

“We’re hoping to identify a management strategy that’s compatible with crawfish,” Wilson said. “Draining to low water can be effective in getting rid of the snails, but it’s also detrimental to crawfish.”

Carter adds that apple snails have the ability to burrow into the mud and wait out dry spells, with some surviving for more than six months doing so.

“One possible mitigation method is once crawfish ponds are drained to till them after they have dried out,” Carter said.

Chemical control options could be a future solution, Wilson believes, but those come with their own caveats.

“One shows a little promise, but finding a chemical that’s detrimental to snails, yet safe for crawfish is a challenge,” Wilson said. “Plus, it could be a hard sell to consumers.”

Wilson sites as his biggest concern apple snails continuing to spread into new farms and affecting the entire crawfish production industry. But he said that is a worst-case scenario that can be prevented.

“Eventually, we might be able to identify a solution, but it’s not going to be a silver bullet,” Wilson said. “The best method of prevention is for farmers to remain aware, use controlled flooding with well water when possible and to clean their equipment thoroughly before transferring it from pond to pond.” 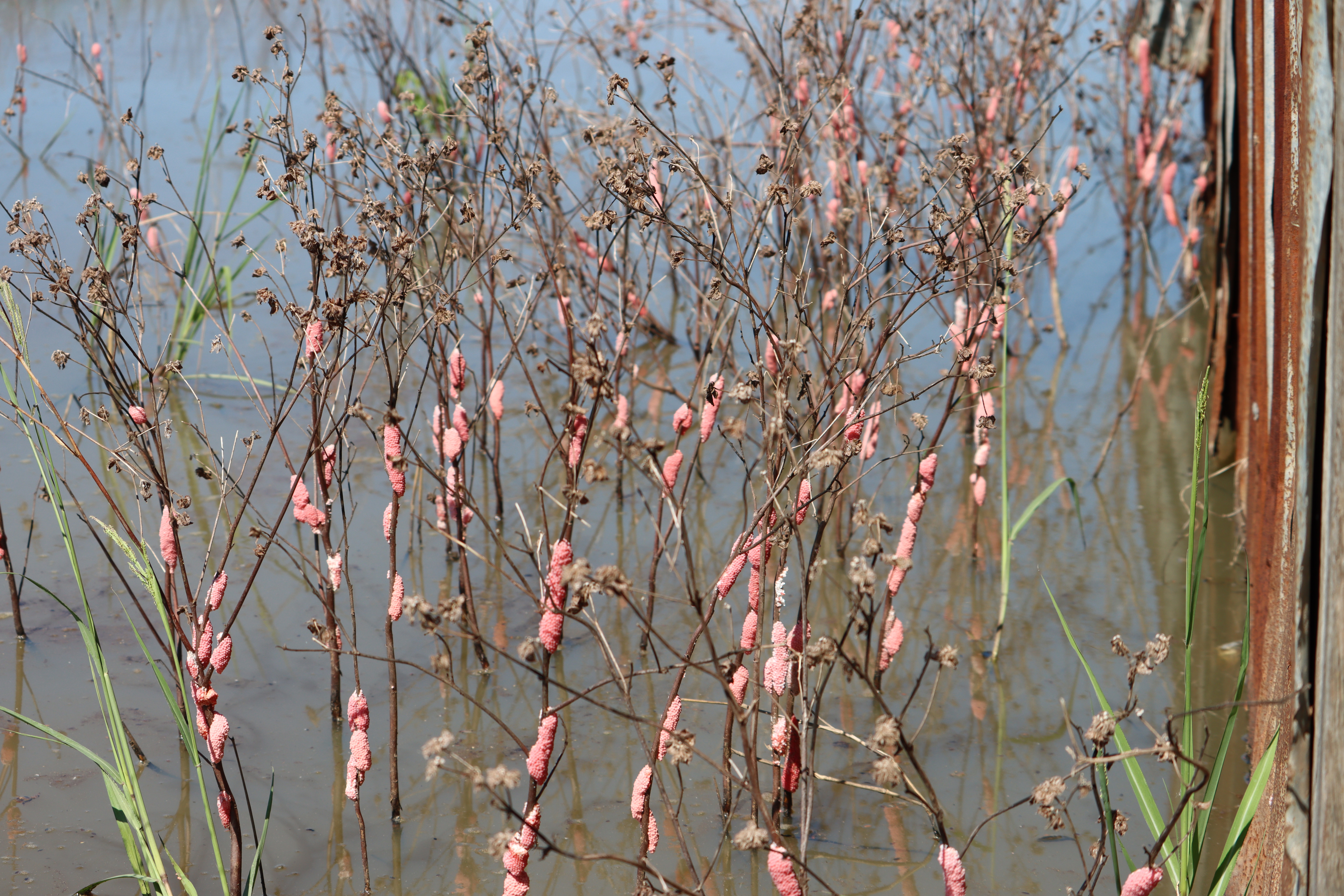 Snail egg masses grow a few inches above the water. A good way to prevent eggs from hatching is to submerge them in water. Photo by Blake Wilson/LSU AgCenter