$100,000 raised for scholarship fund in memory of Vermilion Parish 4-H’er

The fundraising effort came during the auction of 4-H animals on Jan. 16.

In the midst of their grief, Kaylee’s parents, Erin and Allen McLain, set up the scholarship fund to help provide students with education in Catholic schools.

Gwen Broussard, a 4-H volunteer who helped the McLain family set up the scholarship fund, said word spread about the upcoming sale, and numerous people pledged money to buy the pig.

“When this happened, people wanted to find a tangible way to support the family,” Broussard said. “Before the pig even sold, we knew we had $38,000.”

The pig wasn’t sold to just one individual for $100,000; numerous people placed winning bids on the pig, then donated the animal for another round of bidding. At the auction, Pearl was sold, then donated back for another sale 26 times, Broussard said. In total, more than 100 families and businesses contributed to the final amount.

But even after auctioneer Mike Dominique struck the final gavel with a total of $96,000, the bidding wasn’t over. Waits said as her husband, Hilton, also a 4-H agent, was talking to the audience about the significance of the donations, a 4-H supporter, Danny Meaux, rose to speak.

Broussard said people were taken aback. “The crowd gasped. It was so emotional. The family couldn’t believe the amount of money raised.”

During the livestock show, Waits said, Kaylee’s fellow 4-H students were wearing ribbons made by the Pointe Coupee Parish 4-H Junior Leader Club. She said the idea for that gesture came from Brandi Frey, 4-H agent in Pointe Coupee, whose husband attended the LSU Ag Leadership program with Allen McLain, a rice and crawfish farmer. “It was just something they did out of the kindness of their hearts.”

The McLain family also donated a belt buckle for the winner of the Swine Overall Champion Swine Showmanship award. The buckle was inscribed with the phrase “All Heart No Shoes” to recognize Kaylee’s enthusiasm for her 4-H swine project and her preference to go barefooted. “She never wore shoes anywhere,” Broussard said.

The award and buckle were won by Paityn Martin. Broussard said the family plans to continue sponsoring the award.

Broussard said Kaylee, who died Dec. 10, was a devout, kind soul. “This was the kid who was always laughing and having fun.”

She said it was the first year that Kaylee was eligible to participate in a livestock project, and she and Pearl entered the show ring in November in a preliminary event for Vermilion Parish competitors.

“She worked with her pig every day,” Broussard said.

Pearl was shown at the parish show by Kaylee’s mentor, high school student Amelia Detraz, and Pearl managed a respectable fifth place in her class.

“Amelia had helped Kaylee with her pig, so it was special that Amelia got to show Pearl,” Waits said.

Donations continue for the scholarship fund. A Venmo account has been established, Venmo@Kaylee-Abigail-McLain.Mem.

Donations also can be made at any Bank of Erath branch for the Kaylee Abigail McLain Memorial Fund, or mailed to Bank of Erath, P.O. Box 308, Abbeville, LA, 70510. 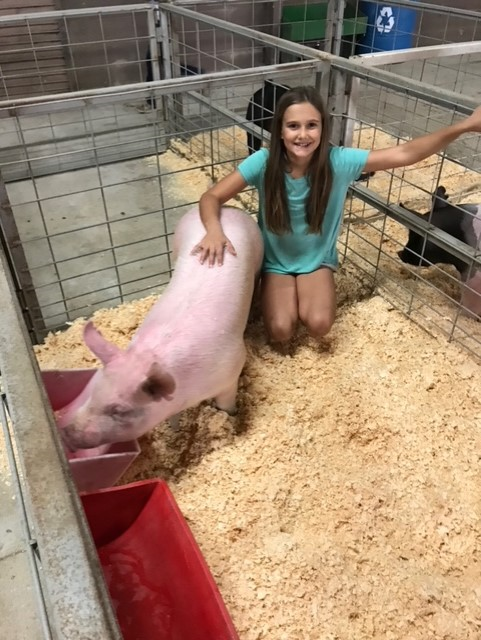 Kaylee McLain with her pig, Pearl. Kaylee was able to show the pig only once, in November, before she died in an accident in December. Photo provided by the McLain family

Amelia Detraz, who mentored Kaylee McLain, with Kaylee’s pig, Pearl. Amelia showed the pig in the Vermilion Parish Livestock Show, and it took fifth place in its category. Photo provided by the McLain family

The buckle donated by the McLain Family to honor Kaylee McLain for overall champion in the Swine Showmanship category. The phrase “All Heart No Shoes” refers to her preference to go barefooted. Photo provided by the McLain family