(10/27/20) BATON ROUGE, La. — 4-H’ers from across the state have been tending their pumpkin patches. Approximately 600 students from 46 parishes participated in the LSU AgCenter’s Cinderella pumpkin contest.

“It seemed all the fun things had ended,” Fontenot said. “Our goal was to get kids to think like a farmer, act like a farmer and be a farmer.”

In June, each 4-H’er who registered for the activity received a packet of five Cinderella pumpkin seeds and a planting guide developed Fontenot. They were instructed to plant their seeds in late June or early July and follow the guide throughout the growing season.

Many participants kept records of their progress. Isabella Sims of Caddo Parish said she would watch bees flying from flower to flower.

“One day I counted eight bees on one female flowers,” Sims said. “I have really enjoyed this project. I love to see how nature works.”

Eli Drach, 9, from Shreveport, said he is inspired to try other pumpkin varieties next year.

“I might try and grow different types like Casper white pumpkins or jack-o’-lantern ones to carve,” Drach said.

Youth who participated could enter their pumpkins in several categories: heaviest, smallest (pollinated), most uniformed, most unique and records.

On October 13, with the help of Louisiana Department of Agriculture and Forestry Weights and Measures Division, the 4-H participants’ pumpkins were weighed. The use of a certified scale helped solidify the accuracy of each pumpkin weighed. A committee of four horticulturists determined the winners for the other categories.

Winners from each category and descriptions of their pumpkins included:

Most Unique: Jacob Gore, of DeRidder Parish, had the pumpkin deemed most unique because it had a very interesting ripening pattern the rind, resembling splatter paint. While most pumpkins have a single area or portion of the pumpkin that ripens later, this splattered effect was clearly not because of a leaf shading or other shading factors but truly a unique attribute.

Most Uniform: Amanda Croxton, of Lincoln Parish, had uniform pumpkin both in shape and color. Her pumpkin was a deep orange or coral color with a perfect circle shape from overhead and even width all around from the bottom of the pumpkin to the shoulders. Cinderella pumpkins are a winter squash and have a squat shape rather than round shape.

Best Records: Isabella Sims, of Caddo Parish, knocked record books out of the park. Her notes were detailed including both overall observations to weekly observations. She also photographed the pumpkins on a weekly basis to show growth. She used cinnamon and red pepper to ward off fungus and cats and contacted her local county agent with questions.

Largest Pumpkin: Violet Stockton, of Lincoln Parish, grew a 68.5-pound pumpkin. This growth is stunning as Cinderella pumpkins often average between 25-35 pounds each. Stockton was able to double that.

Smallest Pumpkin: Carlisle Tomlinson, of East Carroll Parish, grew a pumpkin weighed in at 1.4 pounds. Several 4-H participants sent in smaller sized pumpkin weights and photos, but they didn’t make the cut, as the pumpkin had to be fertilized, not just an unfertilized ovary.

Amanda Croxton, of Lincoln Parish, with the most uniform pumpkin in the AgCenter’s Cinderella Pumpkin Contest. Photo provided by Kiki Fontenot 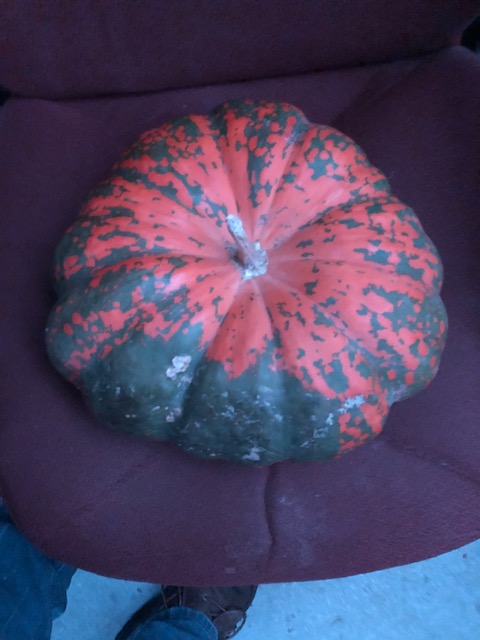