(10/14/20) CROWLEY, La. — Hurricane Delta cut a similar path through Louisiana as Hurricane Laura, with many crops still in the field affected by the second major storm to hit the state in six weeks.

Jeremy Hebert, LSU AgCenter agent in Acadia Parish, said a few farmers had damaged bins. He said some rice fields ready for second-crop harvest are flooded, and some fields have lodged rice. Many farmers are reporting rice being knocked off the panicles.

“It stripped a lot of rice off the heads,” Johnson said.

He estimates his yields have been reduced by half, and he said the remaining rice could be flooded.

“The water is still rising down here,” Johnson said. “It’s getting deep, and I’m sure some rice is going underwater.”

Johnson said he didn’t have electricity for his rice in storage, but he said the rice kept in bins is in good shape. He still has repair work in progress from damage caused by Hurricane Laura. “We’re in reasonably good shape.”

Johnson said he has talked with other farmers in his area who are worse off than him.

“Some say they have a total loss,” Johnson said. “A lot of people were counting on that second crop.”

Rice farmer Paul Zaunbrecher, of Rayne, said rice in the grain-filling stage was beaten badly by the rain, and that is likely to affect yields.

“Rice that was getting ripe got shredded badly,” he said. “Probably 25% of it came off.”

Rice knocked off the plants could be found sprouting on the moist soil.

St. Landry Parish farmer Jeffrey Sylvester said he has 200 acres of first-crop rice. The wind knocked about half of that rice off the plants, and those fields were flooded.

He also has 250 acres of soybeans to harvest, but heavy rains flooded his fields. The bean pods were underwater for about a day, but he plans to harvest the crop in a few days.

“I’ve got all the water off the beans,” he said Tuesday.

He said he was planning to cut a second crop of rice on earlier harvested fields, but now that’s not going to happen. “That wind just destroyed the rice.”

Sylvester was upbeat about his situation, recalling how much of his crops were ruined by flooding in previous years.

In north Louisiana, farmers were in the middle of harvesting their first crop. Delta brought 10 inches of rain on rice that didn’t need more water, said Keith Collins, AgCenter agent in Richland Parish.

“This rice has been through a hurricane and two tropical storms,” Collins said. “Most of the rice was already laying down.”

He said floods covered much of the downed rice.

The effects won’t be known until harvest, he said, but the adverse weather will have an effect, Collins said. “I feel certain it’s going to cause quality problems and a hit to the yield.”

He said some cotton fields had flooded, and the water could cause quality problems, especially if the seed rots in the lint.

Almost all of the soybeans in the area were harvested before Delta, he said, but any remaining beans are likely to have quality problems too.

Blair Hebert, an AgCenter agent based in Iberia Parish, said sugarcane appears to have some damage, and he wondered if the cumulative effect of stress from Laura and now Delta will affect the harvest results.

Hebert said the tops of the cane plants don’t appear to be broken, and the plants have had time to grow more erect after being knocked down by Laura.

Kenneth Gravois, AgCenter sugarcane specialist, said the largest effect of hurricane season for Louisiana farmers and millers will be the factory delays due to weather and issues with newly planted cane.

“Many of the same areas affected by Laura were affected by Delta,” Gravois said. “Newly planted fields had already suffered stand loss from Hurricane Laura and were flooded again. Standing mature cane for harvest in these areas is more resilient.”

Sugarcane farmer Harvey Blanchard said his crop in the Louisa area in St. Mary Parish was flooded with saltwater, but by Monday, the water had drained, and harvest resumed after combines and tractors were back in the low-lying fields.

His brother, Howard, said the harvest was off to a good start before Delta hit. “The yields were good, and the sugar was good.”

Howard said the fields have been flooded several times, but yields don’t seem to be affected.

Vince Deshotel, AgCenter regional livestock specialist, said much of the hay had already been baled, but some probably was damaged by flooding. He said the storm interrupted fall pasture planting, and it’s likely that some replanting will be needed. 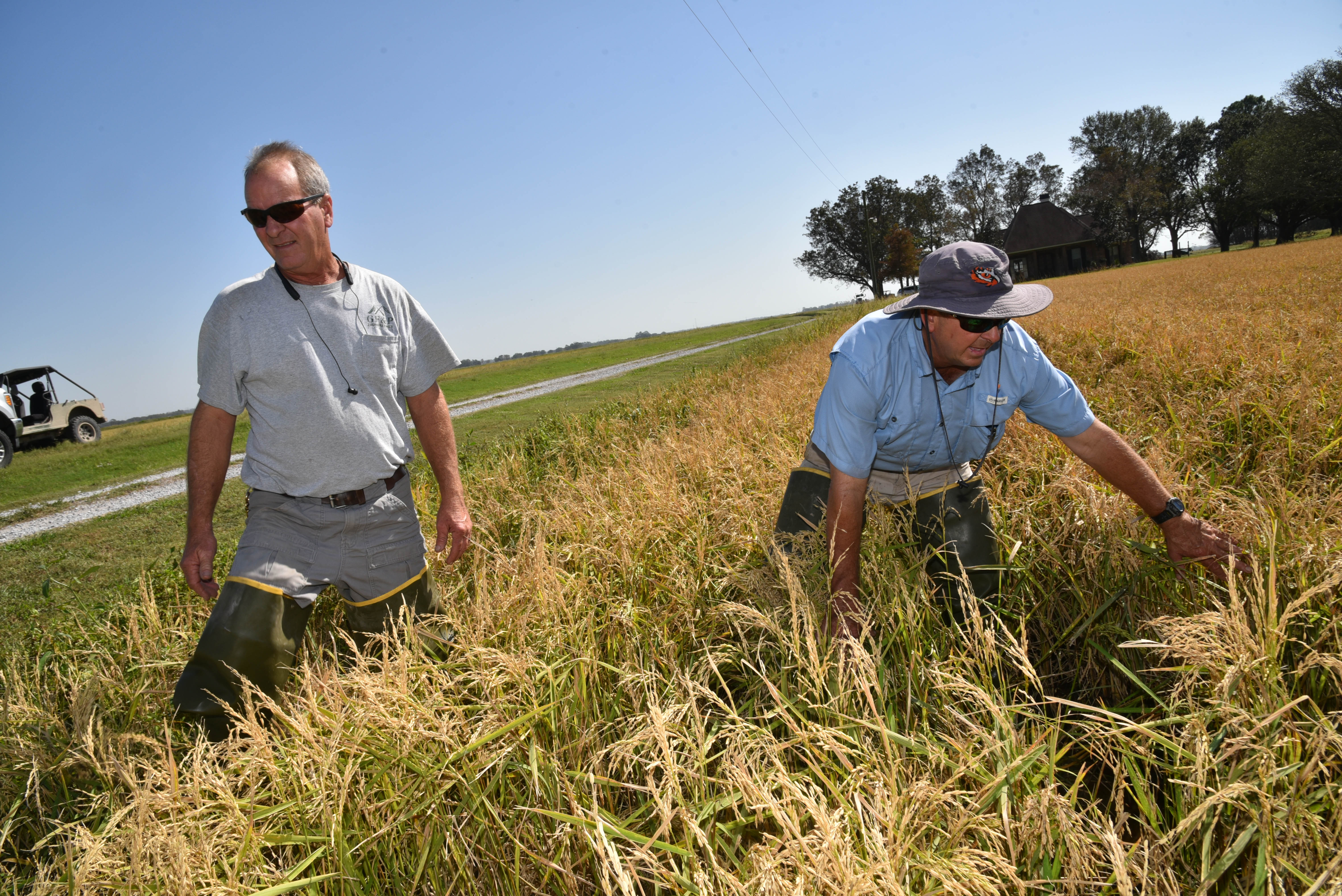 Brothers Philip and Paul Zaunbrecher, left to right, examine damage to a mature rice field near Rayne. Rice ready to be harvested was stripped from the heads by Hurricane Delta, and rice in the grain-filling stage was damaged by the winds. Photo by Bruce Schultz/LSU AgCenter

Howard Blanchard checks on sugarcane in a field near the coast in St. Mary Parish. Hurricane Delta’s surge flooded the field, but it had drained by Monday, allowing the Blanchards to resume harvest. Photo by Bruce Schultz/LSU AgCenter

A horse is surrounded by water Saturday near Lecompte in Rapides Parish, where floodwaters inundated fields. Most of the crops had already been harvested, but much of the sugarcane crop remains to be cut. The mosquito population in the area was high after the pests were brought north by Hurricane Laura. Photo by Bruce Schultz/LSU AgCenter